Do not worry about the “password” in the face of “Corona” 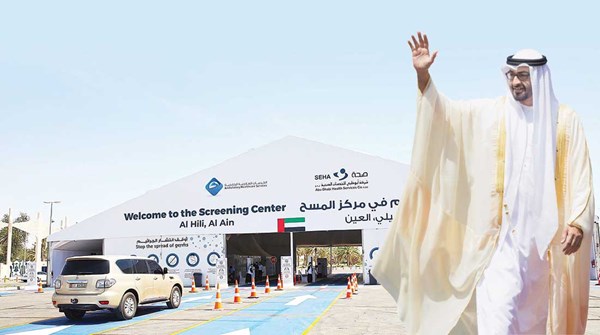 A year after the words of His Highness Sheikh Mohammed bin Zayed Al Nahyan, Crown Prince of Abu Dhabi and Deputy Supreme Commander of the Armed Forces, “Do not paralyze them”, reassuring his people and those residing on the land of the state that we are able to overcome the challenges posed by the “Corona” pandemic, these are still Words echo in everyone’s mind, to confirm that the health and safety of those who live on the homeland are a red line for the wise leadership, even in the most difficult circumstances, and that the vision of the wise leadership in the state raises the human being and pushes him to the fore without issue. Since His Highness Sheikh Mohammed bin Zayed Al Nahyan released his eternal statement during the weekly “Al Barza” of His Highness, the UAE has achieved many achievements and successes in dealing with the “Covid-19” pandemic, and the UAE has been able to turn challenges into opportunities and successes. During the “pandemic”, the UAE provided a global model in dealing professionally with crisis management and dealing in a distinct manner with the spread of epidemics, which was embodied by reality and confirmed by the testimonies of international organizations, chiefly the World Health Organization.
Figures and statistics issued by international institutions and organizations indicate that the UAE is at the forefront in the world in conducting the number of examinations that have reached nearly 34 million examinations until yesterday, and by that it exceeded the global ratios according to the statistics of the World Health Organization, which stated that the UAE’s excellence in providing the examinations contributed to In taking distinguished health measures that led to a significant decrease in the rates of disease, as well as deaths, and as a result, normal life has returned in a tangible way throughout the country, with the follow-up and application of precautionary measures.
The UAE was also able to reach its stated goal of vaccinating about 50% of the citizens and residents on its soil at a time when major countries were unable to reach this percentage, which made the UAE ranks among the first countries in the world to vaccinate its population.
During this year, the Ministry of Health and Community Protection registered and approved 4 types of vaccines against the Coronavirus, making the UAE among the most diverse countries in the world and providing various types of vaccinations against the disease, which gave it an additional advantage.
All these data and others have led to a significant decrease in death rates compared to global rates, and the UAE has now become one of the safest and most stable countries as a result of taking strong measures and measures that have led to the decline of this disease.

Overcoming challenges
Dr. Muhammad Al-Olama, Undersecretary of the Ministry of Health and Community Protection and Chairman of the Board of Directors of the Emirates Foundation for Health Services, affirmed that the saying “Do not paralyze them” was a reassuring message for society, and the biggest motivation for the concerned and competent authorities at the state level to play their role fully to overcome these exceptional circumstances that pass Out the world. He pointed out that the competent and concerned authorities at the state level were able to translate the directives of His Highness Sheikh Mohammed bin Zayed Al Nahyan, as it provided food and medicine, and possessed all the necessary capabilities to overcome the crisis, which was embodied by reality and confirmed by the certificates of international organizations, chiefly the World Health Organization.
The scholars emphasized that the capabilities of the UAE, the balance and infrastructure it possesses over the past years, and the wise leadership it enjoys, have helped strongly in overcoming all the challenges of the “pandemic”.

Amazing results
Dr. Hussein Al-Rand, Assistant Undersecretary of the Ministry of Health and Community Protection, Chairman of the National Committee for Health Regulations said: “Since the words of His Highness Sheikh Mohammed bin Zayed Al Nahyan (Do not paralyze them), practical reality has proven that there have been no deficiencies in various health or living requirements. ».
He added, “The whole world has witnessed a surplus in the Emirates in everything, providing assistance to friendly and brotherly countries, and providing the necessary medical and relief supplies to many countries of the world.”
Al-Rand stated that the global health crisis related to the spread of the emerging “Corona” virus showed that the UAE has turned into a global supply center for medicines, medical devices, training and logistical programs related to the pharmaceutical industry and medical supplies.

Support translation
Dr. Tariq Fathy, CEO of the Abu Dhabi Health Services Company (SEHA), affirmed that the UAE’s wise leadership is keen to provide world-class health care to members of society, and is doing everything in its power so that the people of the UAE and residents of the UAE live in health and wellness.
“Do not cripple them,” he said, “is one of the eternal expressions in the history of the UAE, and it has spread reassurance in the hearts of people.”
He added: “The UAE has achieved great successes, and its handling of the pandemic has been remarkable, and the focus of attention of the whole world in limiting the repercussions of the spread of the Covid 19 virus, and the saying of His Highness Sheikh Mohammed bin Zayed Al Nahyan (Do not paralyze them) was a starting point and a strong impetus that transmitted determination. In the hearts of all health sector workers who have devoted themselves to work and continued day and night to confront the pandemic and limit its repercussions.
The CEO of the “SEHA” company indicated that the UAE played an important and pivotal role in combating the spread of the virus through its participation in conducting clinical trials on vaccines that were reached globally with the Chinese and the Russian.
He pointed out that free vaccination was provided to community members, citizens and residents of the UAE, until the number of doses provided by the UAE reached 6,578,881 doses, in an effort to reach the acquired immunity resulting from the vaccination, which will help reduce the number of cases and control the Covid-19 virus.
He pointed out that the “SEHA” company had opened its health facilities, and designated medical and administrative technical cadres to provide vaccinations to community members, and opened special centers for that.

Facts and achievements
Sherif Bishara, CEO of the American Hospital in Dubai, said that the saying of His Highness Sheikh Mohammed bin Zayed Al Nahyan, “Do not paralyze them,” carried many positive messages not only in the UAE, but also extended to the regional and global levels.
He added: “At a time when international officials recognized the inability of their governments to address this virus and mitigate its repercussions, the saying was a message of hope to the world that proved that the UAE deals differently with crises, as the difference in any crisis is the way it is managed through taking measures and decisions. Correct and commitment to the responsibility towards society, thus making (Dar Zayed) a success story to emulate the countries of the world ».
He explained that over the course of an entire year, the state took quick and strict proactive measures and measures without considering any considerations or financial costs, as these measures were comprehensive, and dealt with the crisis with its health, economic, educational and social aspects, in parallel with the expansion of the examinations, as well as providing the vaccine to citizens and residents. Without distinction, what made it a role model around the world in overcoming the repercussions of the “pandemic” on all levels, after it succeeded in tightening control.
He pointed out that the country tops the list of the safest countries according to global rankings, especially that the number of people recovering is the highest in the world compared to the number of people, while deaths from the virus are among the lowest in the world.
He stated that the UAE’s efforts to confront the “pandemic” were not limited to the local level only, but aid had started to various parts of the world, in addition to providing free treatment for critical cases of the injured through stem cells, and launching a campaign of 10 million destinations to support individuals and families most affected by the pandemic, Taking care of the families of the deceased with the virus of all nationalities, as well as evacuating citizens from the affected areas.

Flexibility of procedures
Dr. Othman Al-Bakri, a consultant cardiologist, “Do not paralyze them”, described it as a hope for the citizens and residents of this good country, so adherence to this saying was made by all those in charge of the health sector.
He pointed out that one of the most prominent data that occurred during the “pandemic” was the flexibility provided by the concerned and competent authorities at the state level, to facilitate procedures, and to overcome obstacles to face challenges and obstacles during the pandemic, as it used to undertake rapid intervention, and the goal that is always emphasized was the necessity of providing services. All health care, and there was no shortage of medicines.

Amer Al-Sharif: The UAE is confidently moving towards recovery
Dr. Amer Sharif, Director of the Mohammed Bin Rashid University of Medicine and Health Sciences, Director of the Control and Control Center for Combating Corona Virus in Dubai said: “A year has passed since the words of the eternal saying (Do not cripple them), which are words full of hope and optimism, which His Highness reassured all the residents of the land of the state. UAE, that the country is able to face the pandemic ».
He stressed that in light of the exceptional circumstances that we were all going through, His Highness’s words strengthened the feeling of security and safety among citizens and residents alike, while we are now confidently moving towards recovery.
He pointed out that during this year the UAE has proven its global competence in fighting the Coronavirus, through legislation and proactive precautionary measures that the country has taken since the beginning of the “pandemic” to preserve the health and safety of society on the one hand, and to preserve social stability and economic sustainability on the other hand, and he drew to Collaboration of efforts among community members to adhere to these measures, which reflects the social responsibility of the UAE community, in addition to the economic firmness and initiatives adopted by the state to support business continuity and accelerate recovery.

22 national survey centers
Dr. Tariq Fathy, CEO of the Abu Dhabi Health Services Company (SEHA), indicated that the Abu Dhabi Health Services Company (SEHA), in cooperation and coordination with the Department of Health in Abu Dhabi, Abu Dhabi Police, the Municipality of Abu Dhabi City and all official authorities in the UAE, has established national survey centers in various emirates. The state is to conduct the examination to detect the Coronavirus, as the number of these centers has reached 22, and highly qualified medical, technical and administrative personnel have been allocated to manage these centers.
He pointed out that Al Ain Hospital and Al Rahba Hospital were designated to treat and care for HIV-infected cases according to the protocols approved in the UAE, and special centers had been set up to examine workers in the Musaffah area, and other measures that it had taken to confront the virus.
Fathi stressed that the measures taken had important positive effects in overcoming the challenges resulting from the “pandemic”, and that the health sector in the UAE was able to transform opportunities into successes.

Doctor Strange 2 will span the MCU’s multiverse, according to Elizabeth Olsen