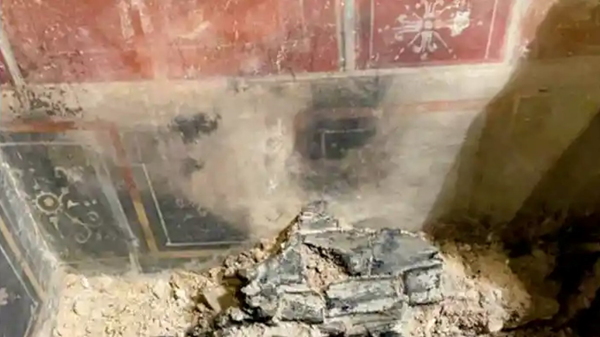 An ancient Roman building was found during excavations of a former cinema in Verona, northern Italy, in what has been described as a “miniature Pompeii”.

The discovery occurred during excavations in the basement of the “Astra Cinema”, which is undergoing renovation after being abandoned for more than 20 years.

The Archaeological Superintendent of Verona, the department in charge of archeology in the region, said the building, which dates back to the second century, “with its splendid walls, evokes a miniature Pompeii”.

It was not yet clear what the function of the building was, but experts said it appeared to have escaped a fire as the roof collapsed and burnt wooden furniture appeared among the finds.

“It seems that a fire has ended the presence of the complex. Despite the fire, the environment has been kept intact, with the brilliant colors of the walls dating back to the second century,” the supervisor said.

Finding and proving a fire has raised the implications of ancient Pompeii, which was destroyed by the eruption of Mount Vesuvius in AD 79. “A tragic event, in this case a fire, suddenly put the end of the complex, leaving traces,” the report added.

The discovery comes just over a year after a perfectly preserved Roman mosaic floor was found near Verona, according to rt.

The polychrome tiles, under a row of vines, were part of the foundations of a Roman villa, the remains of which were discovered a century ago in a mountainous area above the town of Negrar di Valpolicella. It is believed that the villa dates back to the third century.