Director of the Department in the Mohammed bin Rashid Al Maktoum Global Initiatives for “Al Ittihad”: 3 main partners for the implementation of the 100 Million Meals campaign 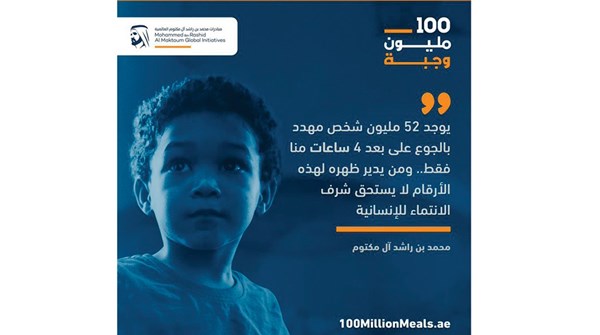 Sarah Al-Nuaimi, Director of the Department of the Mohammed bin Rashid Al Maktoum Global Initiatives, revealed that there are 3 main partners to implement the “100 million meals” campaign, which are the regional network of food banks, the United Nations World Food Program, and the Mohammed bin Rashid Al Maktoum Charitable and Humanitarian Foundation. A study and identification of the countries most in need of food, which suffer from poverty, deprivation, poor families and vulnerable groups in lower-income societies, in addition to their suffering from the repercussions of the pandemic, and 20 countries in Asia and Africa have been targeted, including 11 Arab countries: Egypt, Sudan, Lebanon, Jordan, Syria Yemen, Iraq, Somalia, Palestine, Tunisia, Mauritania, in addition to India, Pakistan, Bangladesh, Ghana, Angola, Sierra Leone, Tanzania, Kenya, and Uganda.

She explained that there is a plan to increase the number of countries, and it will be announced soon, noting that a plan has been developed to distribute food parcels in coordination with partners in each country, and the campaign will extend for a period of 3 months until the completion of the distribution of 100 million meals, and coordination has been made with the regional network of food banks. Which includes 77 food banks, and 12 banks in 12 countries will participate in the distribution of food parcels in the campaign “100 million meals”, indicating that each food parcel contains foods containing dry materials that cover all the nutrients required in healthy nutrition, and each parcel will be devoted to a family consisting of 5-7 individuals for a full month, and food parcels will be delivered to the beneficiaries of individuals and families directly to their places of residence or locations, as the campaign provides food support to the lowest income groups in the target countries, and contributes to efforts to combat hunger and poverty, and to provide basic foodstuffs to the beneficiaries of the campaign A translation of the directives of His Highness Sheikh Mohammed bin Rashid Al Maktoum, Vice President and Prime Minister of the UAE and Ruler of Dubai, “may God protect him”, in creating hope and providing aid to the needy and deprived in the world.
She added: The goal of the campaign is to provide food support and combat hunger in lower-income communities within the axis of humanitarian and relief aid, and after the great success of the “10 million meals” campaign launched by His Highness Sheikh Mohammed bin Rashid Al Maktoum last Ramadan, with the aim of Providing support and food security for individuals, needy families and the groups most affected by the repercussions of the exceptional circumstances imposed by the new Corona epidemic (Covid 19) on the whole world. His Highness decided to expand the campaign and consolidate the approach of goodness and giving and the Emirati humanitarian work in various parts of the world. Meal », as a continuation of the 10 million meals initiative, to contribute to facing the hunger challenge, which is one of the biggest challenges facing the world.
And she continued: The “100 million meals” campaign coincided with the blessed month of Ramadan, with the values ​​of humanitarian giving, charitable work, solidarity and compassion represented by the holy month, which are renewed annually by the leadership of the state and its society, by providing humanitarian aid to all without discrimination on the basis of race, religion or region.
She said: The “100 Million Meals Campaign” enables everyone inside and outside the UAE to donate to fight hunger, provide food support to vulnerable communities and lower-income groups, and allow individuals, institutions, companies, businessmen and all segments of society and economic actors to contribute to facing the global hunger challenge, and to devote the values ​​of giving. In the month of goodness, he supported the largest campaign of its kind in the region to provide 100 million meals.

4 main channels for donation
Al-Nuaimi explained that 4 main channels have been provided to donate and participate in the campaign, as the ‘100 Million Meals’ campaign receives donations and contributions from institutions and individuals through 4 main channels, which are the campaign website www.100millionmeals.ae, and any person or institution can purchase a certain number. Of the meals, each according to his ability, while the call center for the campaign receives donations from the shareholders via the toll-free number 8004999, and donations to the “100 Million Meals” campaign can be made through the bank account designated for the campaign through Dubai Islamic Bank, which is AE08 0240 0015 2097 7815 201.
She added: Those wishing to contribute can also donate to the “100 million meals” campaign by sending the word meal or meal in English in the form of an SMS text message to specific numbers on the “Du” and “Etisalat” networks in the UAE, so that the equivalent number is purchased through it. A certain number of meals, starting from 10 meals, to reach the beneficiaries in the form of food parcels in the countries covered by the campaign.

In the Moscow region, 9 reservoirs with a dangerous ice thickness were revealed