Director of Ras Al Khaimah Municipality to “Al Ittihad”: Renewable energy is the path to sustainability 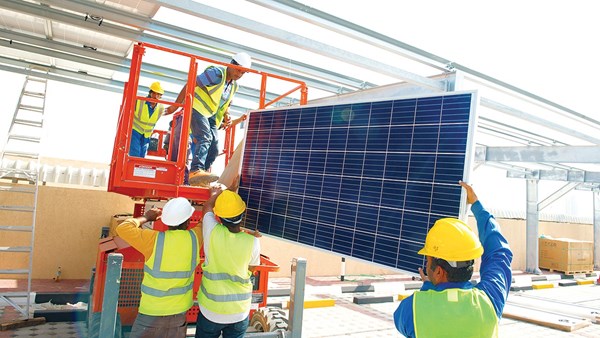 Munther Al Zaabi, Director General of Ras Al Khaimah Municipality Department, revealed that the Ras Al Khaimah Energy Efficiency and Renewable Energy Strategy 2040 has completed its fourth year in 2021, through a series of initiatives and projects to conserve energy and water.
He mentioned that these projects were represented in the internal projects concerned with the municipality department, and others related to entities, institutions, buildings and society, as the strategy includes all energy and water consumers at the emirate level, in cooperation with all government agencies, and with the encouragement of the private sector.
He pointed out that the strategy seeks to reduce energy consumption by 30%, reduce water consumption by 20% and raise the rates of energy generation with renewable energy sources by 20% by 2040.
In his interview with Al-Ittihad, Munther Al-Zaabi said: In 2020, it was noticed that the rates of saving in electricity and water increased from the modernization works of the buildings of the municipality department, which were completed in the years 2018 and 2019, for both the central slaughterhouse located in the Al-Faliya area, and the building. Department of Public Health.
He added: A 30% decrease in electricity consumption and 40% of water consumption was detected in the central slaughterhouse, and that was only in the first half of 2020 AD, after a series of development and improvements represented in adopting air conditioning systems using multiple technologies such as installing a device. Vortex Condenser »Increase the efficiency of air conditioning units.

He continued: As well as replacing thermostats, as well as replacing some air-conditioning units and replacing traditional lights with high-efficiency LED lights, working to improve water consumption by using devices to control water flow, and other improvements that affected the building’s facilities and services.
He pointed out that the department carried out an energy audit in all buildings belonging to the municipality, which resulted in an inventory of all possible improvements, which were implemented at the beginning of this year as part of the ISO 50001 Energy Management project.
As for projects related to green buildings, he revealed that in the year 2020, Barjeel Green Building standards were adopted in more than 2000 buildings in the design and construction stages, including some of the existing projects that fall under residential buildings, public buildings and the hospitality sector. He pointed out that the number of building permits issued under Barjeel for the year 2020 reached 1,136 building permits and 2,372 buildings, with a total of 3,508 permits and buildings.
He explained that the number of building permits issued under “Barjeel” for the months of January and February 2021 amounted to 227 building permits and 282 buildings, with a total of 509 permits and buildings. The most prominent of these buildings are residential villas, investment villas and industrial buildings.
Al Zaabi talked about the first solar energy project in the buildings of the Ras Al Khaimah government, where the solar car parks were designed with a capacity of 230 kilowatts, which revealed the production of 260 kilowatt hours between the months of April and December of last year, and this represents approximately 15% of the total consumption of the building. He pointed out that the Municipality Department is also working on joint solar energy projects for many governmental and private bodies in the Emirate of Ras Al Khaimah, whose maximum production capacity reaches the equivalent of 15 megawatts of production.
He stressed that the department continues to implement and approve new projects that enhance competitiveness in the field of energy and renewable energy, as well as training and rehabilitation programs implemented in this aspect and awareness programs for community segments to create an information platform that provides all aspects of energy.