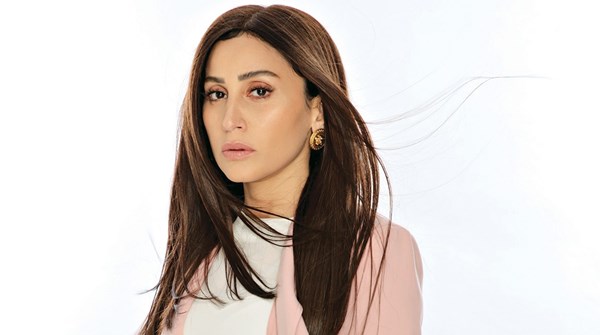 Dina El-Sherbiny revealed to “Al-Ittihad” that the Lebanese series “The Visit” consists of 8 episodes of horror and suspense and is taken from real events of real people who lived the experience of horror over thirty years, through which he presented the character “Ensaf” that arrives in Beirut from Cairo, In 1981, on an unexpected visit to the home of the “Haddad” family, which suffers from a problem that the family classifies as a “curse”, and from the moment of its arrival, supernatural events occur and full of terrifying surprises, so that “Ensaf” later believes that the same curse was lost by her family. In Beirut to film the series, which is co-starring with the Lebanese star Takla Chamoun in the first cooperation between them, and Carol Abboud, Elie Mitri, Abdo Shaheen, Serena Al-Shami, and a number of Lebanese actors participate, and its events revolve in an atmosphere of terror and suspense in the form of a drama based on real events It took place in the eighties of the last century, and is supervised by the scriptwriting of the script, Maryam Naoum, in cooperation with a workshop narrated and directed by Adolfo Martinez, and it is implemented by a professional international team, who participated in the manufacture of international series.
She indicated that she had finished filming 3 cinematic works: the movie “The Haunted Palace”, starring Ahmed Daoud and Sherif Mounir, directed by Wael Abdullah, which is considered the first three-dimensional movie in Egyptian cinema, and the movie “One Second” starring Mustafa Khater and directed by Akram Farid, and the movie “One Second”. March 30” starring Ahmed El-Fishawy, directed by Ahmed Khaled Moussa, whose events revolve within an action-trailer framework.
It is noteworthy that the star Dina El-Sherbiny participated in the last Ramadan marathon in the series “Qasr El-Nil”, which took place in the sixties.