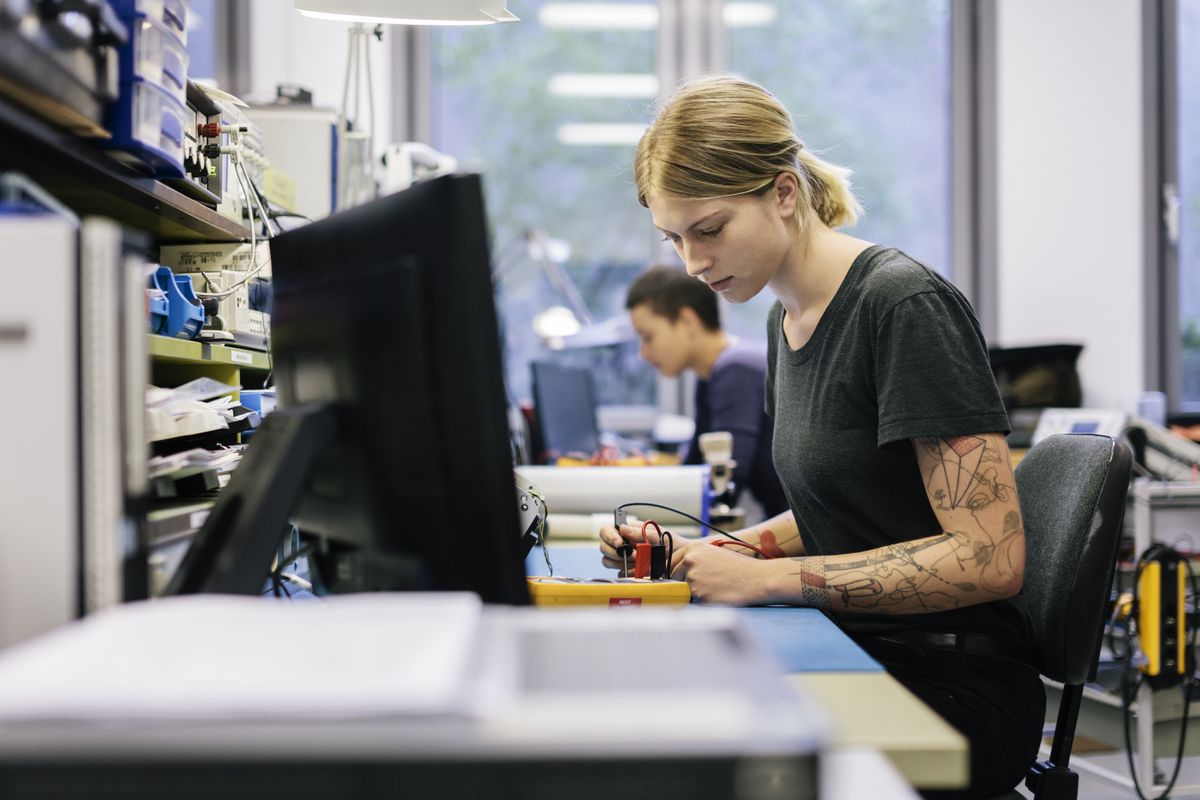 A brand new building in Barcelona has an analog problem and a digital solution: the double exterior windows filter water when it rains, and the remedy is a special gasket for a watertight seal.

In traditional industry, these pieces would have been injected into a very expensive mold, only profitable for massive runs. But the additive printing of IMES 3D, the startup supplier, has delivered a much smaller quantity, only what the building needs, for much less than the mold would have cost.

With that competitive capacity, it is normal that they do not lack customers knocking on the door. What are they missing then? “Digital talent in the quantity and with the level of training that the market demands”, explains David Mestres, one of the two young founders.

The contrast is almost incomprehensible: on the one hand, structural unemployment, especially youth, and, on the other, a huge fishing ground for quality technological work, the kind that allows a life to be refocused or planned.

The connection between both extremes is invented but not entirely applied: a la carte education, diverse, from higher engineering to the previously despised professional training or updating (reskilling) that periodically summons us all. Another contrast: the most evolutionary, most mutant sector, the technological one, is at the same time the most stable.

The European Commission estimated the number of vacant technology positions on the continent from 500,000 to 750,000 in 2019

In Spain, almost half of the new jobs created this year will be related to the digital environment, about 200,000, says the European Union. But according to Fundación Telefónica, only 31% of the workforce knows what you need to know to work in that environment. And in 2019 the European Commission calculated from 500,000 to 750,000 vacancies in technology on the continent.

The training effort also advances. For example, “in Barcelona the supply of technology professionals grew by 23% between 2017 and 2019, the problem is that the digital economy and demand are running faster,” says Jordi Arrufí, Director of Digital Talent at Mobile World Capital Barcelona.

In a way, technology is a victim of its own nature, that of exponential acceleration. The digital economy, Arrufí explains, is based on two pillars today distant but intimately connected: a more powerful and at the same time cheap technology (“to produce an additional unit of software it costs zero ”) and people with training to understand and rush that huge business opportunity.

More than a year after the pandemic, “we already know that the recovery will not be in U or V, but in K,” says the expert. The ascending leg of the K is the stimulated, digital sectors, and the descending leg, the ones that become obsolete. Conclusion: the first group needs specialized digital training to feed themselves, and the second needs specialized digital training to recycle or transfer their surplus employment to the first.

The psychological dimension of training is reflected in the recipes against the digital divide, according to Arrufí, such as the obligation to awaken vocations in STEM disciplines (science, technology, engineering, mathematics). “Only by achieving it among women we could already reduce it by 80%,” he points out. “Forming the new professional profiles 4.0 is the opportunity for women to achieve greater representation in the industrial and logistics sectors”, third Blanca Sorigué, general director of the Barcelona Free Zone Consortium.

Another recipe that enters fully into the human factor: the motivation for professional recycling in sectors in accelerated transformation, almost all of them, “which will see more changes in 15 years than in a century,” Arrufí clarifies.

Forming the new professional profiles 4.0 is the opportunity for women to achieve greater representation in the industrial and logistics sectors

Iván Rey, the other young co-founder of IMES 3D, explains that training in his sector is progressing, there is already a master’s degree in additive manufacturing in Barcelona, ​​”but now we would need three, one for each specialized printing technique”. “If the specialist talent we need is not abundant, we prioritize personal attitude, curiosity, the ability to learn quickly because technology always evolves, you have to integrate new knowledge every day.”

For Rodrigo Miranda, general director of the ISDI international business school and advisor for the hub of the National Plan for Digital Capacities (PNCD), “the good news is the firm vocation with the change of the production model, there are hubs of support and management, and regardless of the political suit of each one, the PNCD consults the different business and educational actors. The objective is to look back in 10 or 15 years and see a much more digitized GDP, to have a more global and competitive reach, especially in Europe and Latam ”.

Miranda speaks of attitude in a broad sense, of leaving the comfort zone, as people, as companies and as a country. “The first thing I ask the students is what have they learned for their professional development during confinement?” For training to take root, prejudices and awareness must be swept away. Hasn’t it been done so far? “Not enough”.

The tendency to the comfort of a developed society has prevailed. “In this we must be politically incorrect, recognize that we are the people who are primarily responsible for our training. I can help you by creating learning environments and programs, with a training check, but the attitude of continuing education depends on you ”, Miranda points out, and adds:“ When we wake up that hunger, training becomes easy ”.

The objective is to look back in 10 or 15 years and see a much more digitized GDP, to have a more global and competitive reach, especially in Europe and Latam

Rodrigo Miranda, director of ISDI and advisor for the PNCD hub

Also: reverse false and stubborn clichés, such as that technology is only for the clever, restore dignity to professional training stigmatized since the eighties, communicate that the variety of technological content is such that anyone, “I repeat, anyone,” insists Miranda, you can choose to train digitally, in addition to practical training such as the actual digitization of a company or the creation of a e-commerce with financing, billing and real customers.

And two more attitudes, according to the professor: an optimistic and realistic spirit, because it is based on the certainty of almost full digital employment. And herd spirit: that this individual vision of own responsibility is projected in the collective, in the all together. “Collaboration between companies, administrations and educators is essential to create ecosystems, shuttles and hubs mutual aid. Nothing is left over, everything adds up ”.

“Talent is always a decisive factor, and more so if we talk about developing and consolidating new business models. In the current context and with digitization as the engine of development of a new economy, quality training alternatives that allow the formation of new professional profiles are more important than ever ”.

Pere Navarro, special delegate of the State in the Consorci de la Zona Franca de Barcelona (CZFB), starts from this context to explain two initiatives of this key public-private company in the industrial fabric of the city, the region and the country.

One, the training and revitalization pole that will be created in the historic Post Office building in Barcelona: “We want it to be a reference space to give young people the opportunity they need, a Netflix of technological training with content adapted to the real needs of companies ”, adds Navarro.

And two, DFactory BCN, “the largest hub technology in southern Europe to attract companies from all over the world in Industry 4.0 and strengthen Barcelona and its Free Trade Zone as the epicenter of the digital economy ”.

Prospecting for DFactory BCN yielded no less than 63 profiles of specialist professions to supply the market. “It will have mixed research units, international centers of excellence, shared laboratories with the latest 4.0 technology, offices, a training room and an incubation area. The first phase, of 17,000 square meters, will generate 1,500 direct and 5,000 indirect jobs ”, details Blanca Sorigué, general director of the CZFB.

Chad | The President of Chad has died on the front lines

Columns The future is still scary: China’s artificial intelligence surveillance is like straight out of a 1980s science fiction film