Diego Boneta, on his transformation into Luis Miguel: “I became obsessive, crazy” 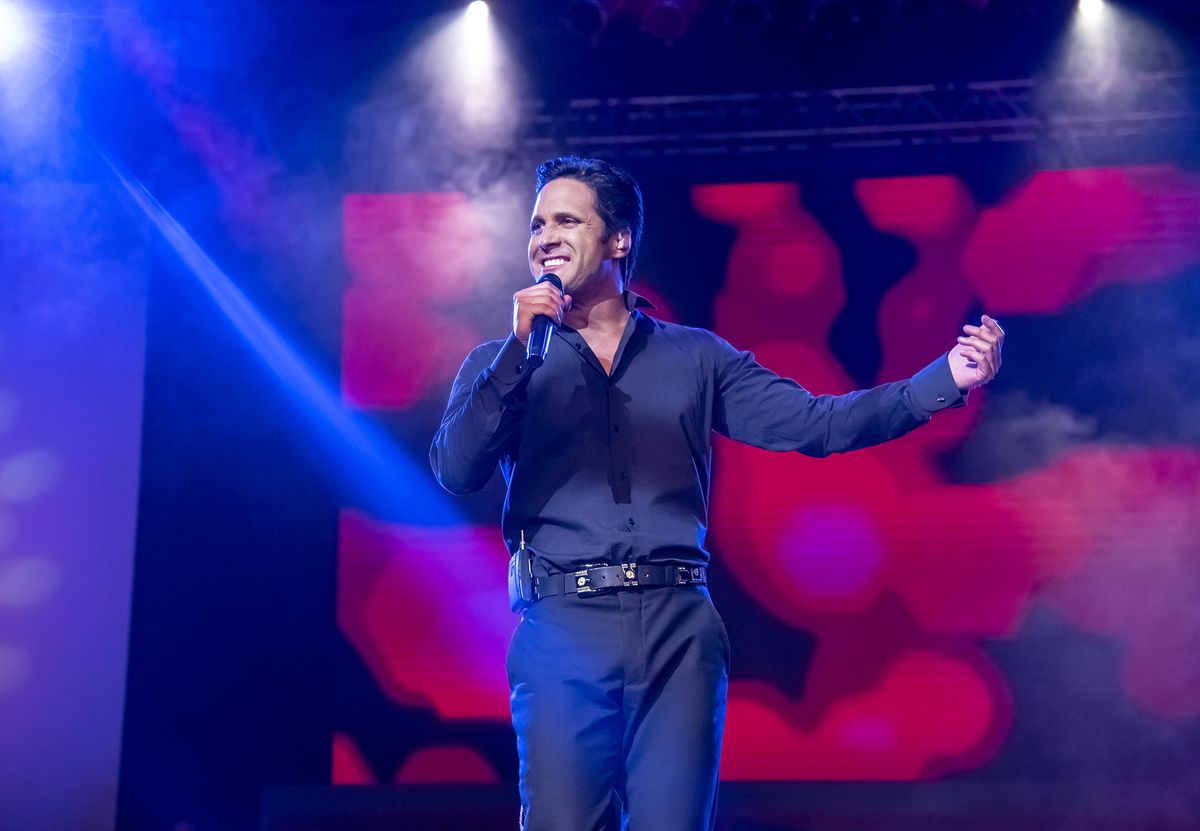 It was impossible to get rid of it. A black resin between his two front teeth stood defiantly before the mirror. An actor can transform himself into anything, even in El Sol, the king of Latin music, the güero idol of the masses, in a whole latin lover of the nineties. But it is not so easy to run away from him. Diego Boneta (Mexico City, 1990) was chosen four years ago to play Luis Miguel in the Netflix series about his life. Two seasons have been aired and the third and final one has been announced. From the first episode, the thirst of his followers and new followers in the absence of the singer from the stage and from any public act has been satiated by an actor who talks like him, moves like him, sings his songs like him and even imitates his same spacing between teeth. Boneta seems to have swallowed it.

The Mexican actor saw so many videos of Luis Miguel, dissecting each interview, each concert, each public appearance, that he memorized until the exact moment in which he had to breathe. He says that in the filming of the first season they called him Howard Hughes, the tycoon who played Leonardo DiCaprio in The Aviator: “I became obsessive, crazy. It was a project that I totally lost myself with. Especially in the first season, because I knew the only way it was going to work was if I became the character. Only if I believed it, was I going to make others believe it ”.

These days, the closest thing to seeing Luis Miguel, listening to him and remembering his songs, is Diego Boneta. Faced with a decades-long closure of the singer without providing an interview and after a half-gas tour three years ago – many concerts were canceled or concluded in the middle -, Boneta has become the substitute for one of the most powerful musical phenomena of the masses. from Latin America. “It makes me crazy. There are many young people who did not know him and many parents approach me and tell me that their children did not know who Luis Miguel was and they believe that I am. As it is something that does not fit my head. Luis Miguel there is only one ”, says the actor.

Everything that professionals recommend when coming home, taking a shower, removing makeup, returning to normal life, was long threatened by a leading role whose life and personality exceeded the reality of his routine. The resin was always there to remind him that Luis Miguel had not left.

“How are you, sweetheart?”

When he went out with friends, some would interrupt him to warn him that he had done it again. The tagline with a strawberry accent (posh) or mirrey Mexican, which Luis Miguel catapulted into a way of speaking that is maintained among the Mexican upper class, escaped him when he entered a restaurant, ordered a few drinks or addressed a woman.

He spent almost seven consecutive months incarnating a different person at home and at work. “My orthodontist filed my teeth and put that black resin on me. I’d come home and look in the mirror and see the character. That was very strange, ”explains Boneta. Later, when filming ended, I didn’t know who it was. “I remember perfectly that when the diastema was removed [el efecto de hueco dental] and they cut my hair, he didn’t recognize me. It was just as weird to see me as when the character was cast for the first time ”.

Luis Miguel’s way of speaking is not easy to imitate without falling into caricature. There are so many phrases, gestures, and disturbing looks from this singer designed for him since he was little with the sole objective of seducing, that the challenge that Boneta had in hand did not seem easy. He sought out a professional in Madrid, the theater director and acting teacher Juan Carlos Corazza, to humanize the dehumanized: the emotional contradictions of a man designed to project the seamless image of an object of desire.

“Imitation is a particular art. But the challenge was to stay not only in the shell, but to be able to imagine, enter and embody the entire world of the character, ”says Corazza. There was a lot to create from scratch. Many had seen the image of Luis Miguel on stage, in interviews, but very few imagined one of the most secretive and mysterious artists in the industry in the privacy of his room, talking with a friend, crying for his mother. The key for Corazza was treating the character like anyone else, “with humility.” “Trying to achieve the best version of him. Without ever believing that you will be able to be him, but rather his maximum expression ”, he adds.

It is not common to become a character who reveals the most intimate secrets of his life in a series and who is also alive. Luis Miguel is 51 years old and at least during the first season he supervised and was pending the production of the series. A project that also served to relaunch his image and his career, degraded in recent years by embarrassing half-hour shows on stage, legal fights with former representatives or violent outbursts with members of his team.

While all this was happening, his best version appeared on the screen, the golden age of the king of Latin music. His worst mistakes and flirtations with drugs and alcohol were attributed to the cruel childhood to which his father subjected him – Luis Rey, played by the Spanish actor Óscar Jaenada. And the most tanned chest in Latin America looked again, embodied in Diego Boneta.

Luis Miguel went one day to the set of filming the first season and made the joke of a Boneta characterized until the last strand of his teenage years. Crazy hair, false diastema and shirt open to the navel. “He’s a pretty funny guy,” explains the actor, aware that outside his inner circle it is hard to imagine this man, elusive for decades with the press and cloistered in his Los Angeles mansion, making jokes.

In the two or three times she met him, she scanned his every move. “For me it was incredible to be able to have that opportunity. A lots of biopics [películas biográficas] they are made when someone passed away. But being able to sit with him and absorb every movement, smile, how he spoke… It helped me a lot to create the adult character in the second season.

In this installment of the series, Boneta embodies two eras of Luis Miguel, the most successful of the nineties, when he was in his twenties; towards the middle of the two thousand, and where the beginning of its decline is appreciated. Both Boneta and Corazza agree that the work and concentration to represent these two facets of the artist, seen almost as two different characters, was the most difficult part of their performance. “It was very important to find the right weight for both of us, I didn’t want to get a belly. It was all Juan Carlos, he taught me the importance of the body when acting. How does one walk, what energy does it transmit… Luis Miguel, 35, is completely different from the 22 ”, explains Boneta.

The trick to blend in with Luis Miguel has been, says the actor, “an impressionist work.”

“Instead of looking for big brushstrokes, go point by point. The fine stitch. There are many things that people do not realize, but it is the combination of all of them ”, explains Boneta. “A juggling act,” added Corazza. “Taking into account the number of hours a day that a production of this size requires, achieving balance physically and emotionally, combining facts with fiction of imaginary situations … I don’t know how many can imagine the enormous work of this young man” , emphasizes the teacher.

“Brother, I don’t know how I’m going to sing your songs ”, he once confessed to Luis Miguel in one of their meetings. In case I had little work, the soundtrack of the series includes recordings of the singer’s hits. This included mimicking not only his way of speaking, but also the almost unique ability to breathe at the precise moment before tuning the highest notes in a chest voice. “Then I saw him and he said: ‘Diego, you blew it.’ And hear that from him… ”.

One day 19 years ago, a small boy with little voice, but with a lot of desire, came out on the stage of a contest for young singers to give everything with The girl in the blue bikini by Luis Miguel. At that time it was still not Diego Boneta, but Diego Andrés González Boneta. Most of the boys his age dreamed of being Luis Miguel, that generation that was born in the early nineties observed how that blond man with light eyes and a perverse smile had half the world – especially female – eating out of his hand. A reference too tempting for a 12-year-old teenager with an artistic vocation. What Boneta did not know then is that at 26 she was going to have dinner with him in Malibu (California) and would become his reflection on the small screen.

“Although it seems that we have a similar life: we started at the same age, my grandfather is Puerto Rican [lugar de nacimiento de Luis Miguel], I have Spanish and Italian blood, we could not be more different ”, sentence the actor. His parents, engineers, far from being forced to sing, did everything possible to make him give up. “It is something that one cannot choose, but the least we are alike is in the relationship I have with my family. It is something that Luis Miguel did not have ”.

It is difficult to imagine these days Boneta outside the character of Luis Miguel, his role has reached such a degree of mimicry that the alarms about the future of his career began to sound from the beginning of the first season. “Being pigeonholed was a concern I had, it’s true. That is why I tried to choose completely different projects, from Terminator: Dark Fate [2019] until New order [2020]. And now I’m doing a romantic comedy that has absolutely nothing to do with it. ” And he notes: “Fortunately, for the jobs that are coming, I see that this is not happening.” —Eps