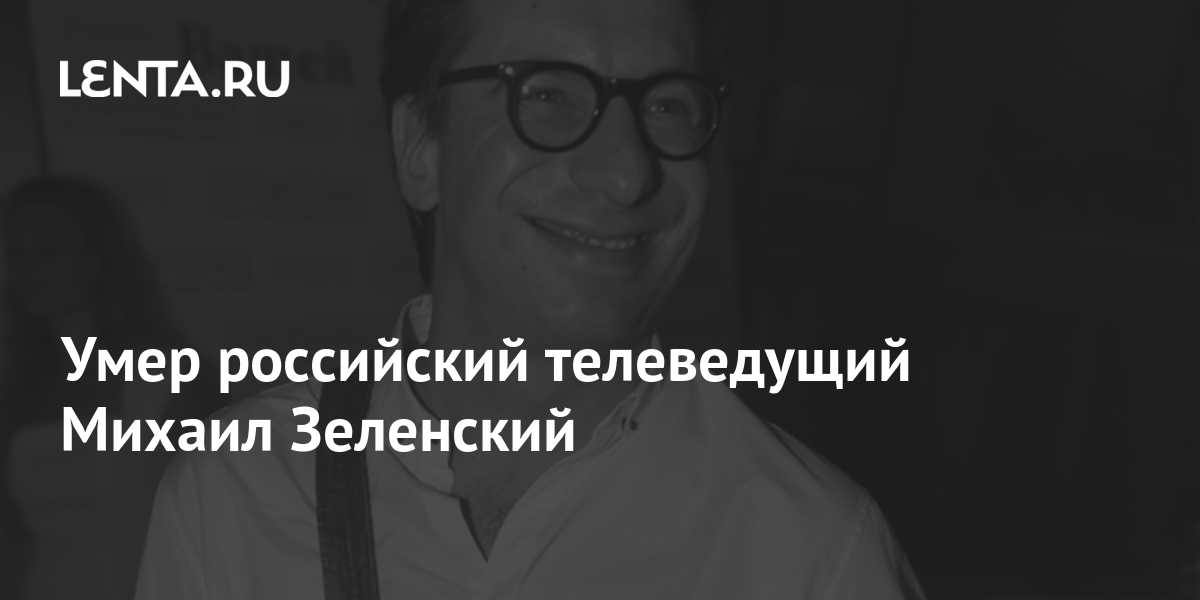 Mikhail Zelensky, a popular Russian journalist and TV host of the Live Show, died in the Dominican Republic at the age of 46. This was announced by the deputy head of the TV channel “Russia-Culture” Alexander Efimovich in his account in Facebook…

Everlasting memory. Our TV presenter Mikhail Zelensky died at the age of 47

Later, the head of the department of the diplomatic mission in Punta Cana, Vyacheslav Pankov, confirmed the data on Zelensky’s death, adding that he was not yet ready to share the details of the incident. He noted that he maintains contact with his family.

By data Telegram channel Baza, the journalist was vacationing in the Dominican Republic with his wife. Suddenly he became ill, and therefore he was taken to the hospital, however, despite all the efforts of the doctors, he died. The preliminary cause of the incident, they called a sudden stroke in the host.

His 39-year-old widow, psychologist Mila Rubinchik, who runs her YouTube channel “Procrastinator”, after the death of her husband, stopped communicating, and also deleted all your posts on Instagram.

Fans about the death of an idol

In the comments under the publication of a post about the death of a popular TV presenter, many caring netizens expressed their condolences to his family and friends. Many of them admitted that it is difficult for them to come to terms with the fact that their idol died so early and called the incident a terrible tragedy.

“It is impossible to come to terms with so many untimely departures. This is against nature and understanding of the universe. A blessed memory, ”stressed Larisa Dmitrieva.

“It is simply impossible to believe and accept it,” writes Valeria Ermilova.

“It is difficult to express sorrow in words – it is too great,” Roman Agayan shared his feelings.

Mikhail Zelensky was born in Moscow on September 7, 1975. In 1992, he entered two educational institutions at once – the Khabarovsk Medical Institute and the Khabarovsk Institute of Physical Culture at the Faculty of Sports Management. During his studies he worked as a DJ for Radio A. Since February 2001 for more than 10 years he has been the host of the Vesti-Moscow program. From 2011 to 2013 he hosted a talk show “Live” on the channel “Russia-1”. In 2016 he became the host of the Ticket to the Bolshoi program on the Russia-Kultura TV channel, and in 2017 he began to host the News of Culture program. In addition, the TV presenter taught at the Ostankino Higher School of Television.

Zelensky is the silver medalist of the second season of the Dancing on Ice project on the Russia-1 TV channel. He was also one of the torchbearers of the 2014 Olympic Torch Relay.

MXGP: Herlings tries the extension with a brace in Trentino