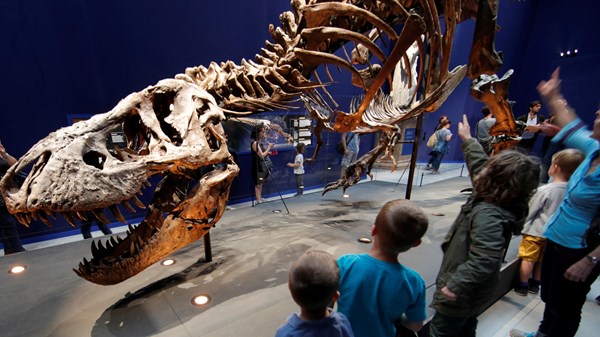 Researchers reached in a new study to determine the speed at which the giant dinosaur “Tyrannosaurus rex”, a carnivore that lived in the Cretaceous period, was walking.
The Dutch researchers said that this dinosaur was moving slower than previously thought, in contrast to its portrayal in movies, and that it was more likely to move at the speed of a human’s walking.
Working on a three-dimensional computer model of the female dinosaur’s skeleton, known as (T-Rex), at the Dutch Museum of Nature, researcher Pasha van Pellert rebuilt muscles and ligaments to discover that the dinosaur’s preferred speed was probably 4.61 kilometers per hour, which is close. From the speed of walking humans and horses.
In an article on dinosaur movement published in the Royal Open Society Science, Van Pellert and his colleagues said that the huge dinosaur tail played an important role in its movement.
They examined how the animal produces a natural, repetitive movement, taking into account not only the leg muscles as in previous studies, but also the movement of the tail, which would reduce the amount of energy used.
By calculating the t-rex step tempo, the researchers estimated his gait speed. But it is too early to assume that a human could have outdone the dinosaur in the run.
The researchers said they have investigated the predator’s velocity and are still studying its possible maximum velocities. There is also no possibility to test these hypotheses because this dinosaur became extinct more than 60 million years before humans appeared on Earth.

Corona in Austria: Extensive openings from May - Health Minister warns of a "deceptive" situation