Dental bite in cars, athletes and drivers use it, why and how it works 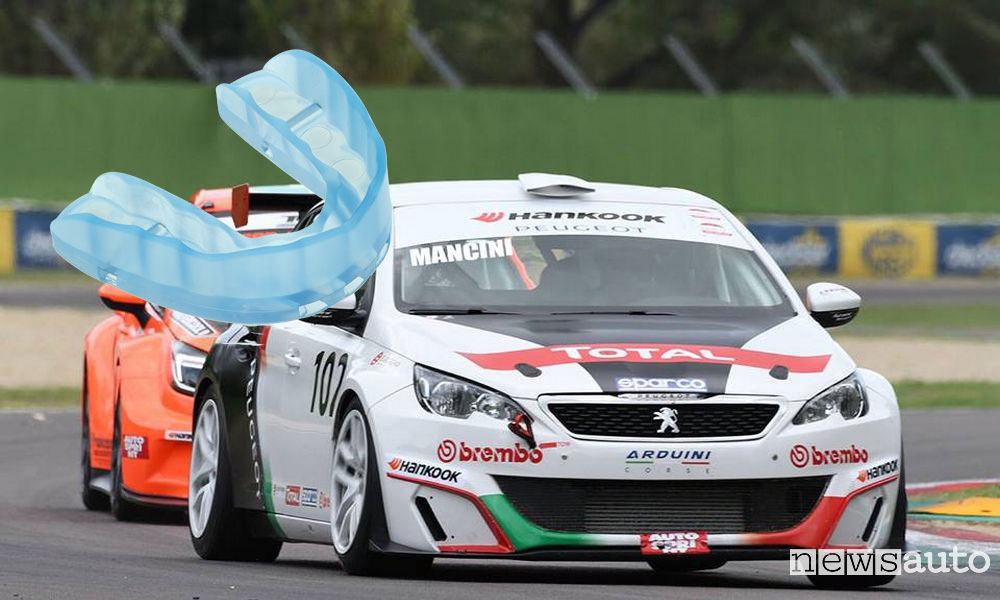 To correct the night grinding (bruxism) is used by the dentist who makes special Bite dental, a technical solution that inserted in the mouth between the teeth especially at night during sleep allows the chewing muscles to to relax and at the same time there is an attenuation or disappearance of the annoying symptoms such as headaches, neck pain, dizziness and tinnitus.

Dental Bite, because “Race Bite” athletes and pilots use it

The dental bite it is used by athletes but also by pilots on the track during racing. The creator of the “Race Bite”For pilots is Pietro D’Agostino, Specialist in Dentistry. The “Race Bite” dental is capable of improve performance of a pilot. It is an evolution of those currently in use, developed with the intention of guaranteeing a clear leap in quality in terms of performance, thanks to the use of dedicated procedures, equipment and software.

The results of using the Race Bite, the dental bite for athletes was studied on 9 rowers, 3 motorists and a motorcyclist by Professor Francesco Felici, of the University of Rome Foro Italico, who illustrated them at the conference “Aerospace and sports dentistry: civil and military multidisciplinary approach“. The dental bite allowed the champion Letizia Marchetti to appreciate a gap of one second-one and a half seconds on the track lap on the Vallelunga circuit. Rowing athletes have gained a boat advantage over a thousand meters.

What happens to the teeth while driving

What happens to the teeth while driving? A pilot when driving continuously varies the heartbeat and breathing (turns even in apnea!). Furthermore, grinds his teeth accidentally; the mandible applies forces of several tens of kilos to the dental arch and activates a series of facial muscles in the first place, but also along the neck, the vertebral column, with repercussions that are by no means negligible even on the limbs.

The pilot who drives on the track is an athlete under mental and physical exertion. After about 20 minutes of driving, the driver’s performance decreases and, the more time passes, the more the decline in performance is amplified. All this is also worth two or three tenths per turn and this is already proven by the scientific literature.

For this reason, professional pilots train scrupulously, following precise work schedules. But that’s not enough, there are riders who at the end of the race are “fresh” and able to print the fastest lap, while others lose two or three positions because the lap times have clearly deteriorated.

In addition to Physical training in the gym and diet, an excellent contribution can be made both by improving the rider comfort (optimal driving position) both and above all avoiding that it can unnecessarily waste physical energies (which then also become mental because they reduce concentration!).

The Dental bite it is the ideal tool to avoid waste, it improves comfort and saves energy for the driver, lap after lap!

How a dental splint is made

Some car and motorcycle riders already use the Bite but it is kind “standard”; it is a “simple” cast of the teeth which aims to improve comfort. The problem is that it stabilizes the situation “statically” (precisely because it is realized “at rest”) e corrects only partially the harmful attitudes or imbalances that the driver involuntarily assumes during the dynamic and stressful phase of driving!

The idea of ​​the Dr. D’Agostino is based on two basic strategies: use a More accurate bite but no less comfortable than it is made with information acquired first statically (with equipment and methods much more sophisticated than those in use) and then dynamically, i.e. in real driving conditions while the rider is under stress!

Race Bite, how the dental bite works for pilots

The pilot comes monitored while driving with a data acquisition system on dental arches and, in some phases of the study, also in combination with a electromyograph which records the activity of the facial muscles. In this way it is possible to quantify the effort of the pilot in “Kg force”, but also to establish precisely how, where and when this happens.

Regardless of the guinea pig pilot, we found very high peaks in particular areas of the dental arch (which vary a little depending on the point of the track, braking, curves, accelerations, variations and so on) that move the “Center of gravity” of front / back and left / right efforts.

With the innovative Bite made “dynamically”, in practice it is done “Runway setup” to the mouth! The thrusts are distributed more evenly, therefore the peaks of force are drastically lowered and the center of gravity is “stabilized” in the ideal position.

In the preliminary research phase, the one that D’Agostino carried out together with To elaborate, the data obtained speak of an improvement in the dispersion of physical / nervous energy that reaches the 40-70%, according to the pilot. As if to say that if the driver makes an additional (and useless) effort to drive, evaluated 1,000 kg per unit of time, this boils down to 600 kg or even less; this happens lap after lap, for races that may even last or one two hours!

Bite Race test on the track, conclusions on the dental bite in the car

On the track the rider with Bite Race obtained the most evident improvements with peaks of “Savings” up to 70%! This is due to major dental occlusion problems (a less balanced mandibular closure).

It should be emphasized that the imperfect mandibular closure is so common that it almost represents normality, since there are few men who have a “dental structure” already perfectly fine-tuned by Mother Nature …

The results in the track test are therefore a lot encouraging, both because the two different working methods worked, and because we obtained these results with just a few laps of the track … and we know for sure that the more the driving effort is prolonged, the greater the benefits obtained with the Bite!

The dental bite could also be a solution to be adopted while driving for many hours on long journeys and also help fight fatigue and sleep.

“I am passionate about car racing and going to make some with mine I noticed that the effort led me to assume a particular position, tightening the jaw, and so the idea of ​​a special bite was born, which has now been tested. I’m glad my observation has been validated”Concludes the creator, the dentist Pietro D’agostino

The complete article on Race Bite written by Piero Plini can be found in the magazine PROCESS No. 156 orderable online.

👉 Read all the articles about automotive technology