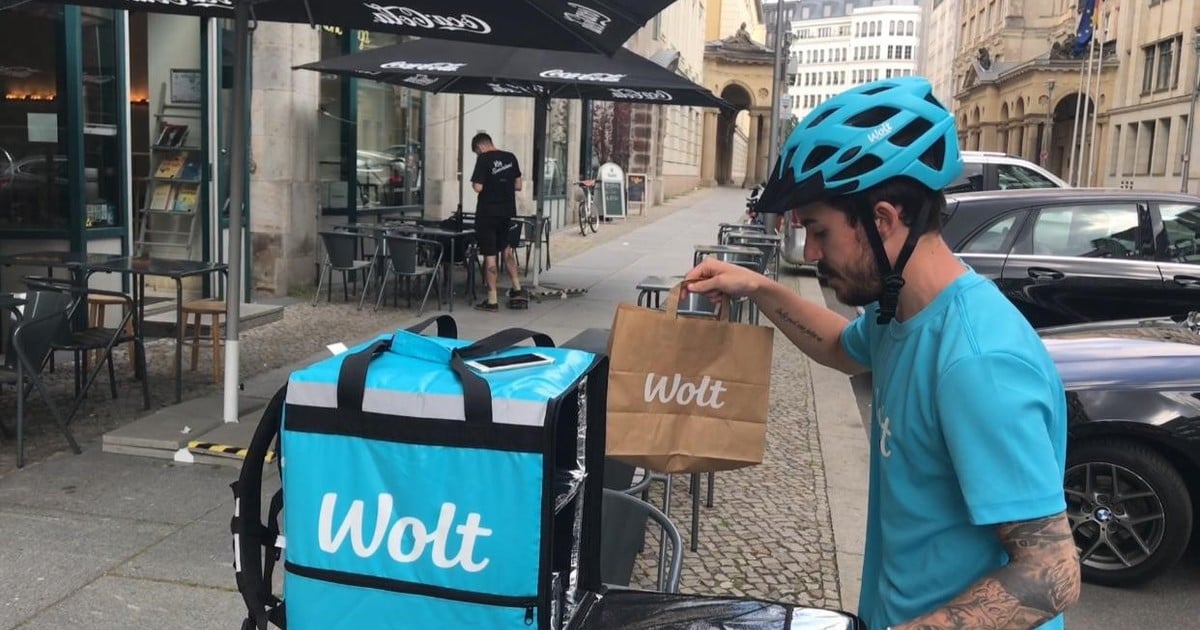 The tweet is from May 15. It has already surpassed 3.3 million “impressions”. The author is Gonzalo Pérez (25), an Argentine based in Berlin, worker of a food delivery application at home. “I spent 54.41 euros. What I earn in less than five hours of delivery. I estimate that the food will last me for almost two weeks, “he said in the publication, attaching photos of the ticket and the products he bought in a supermarket in the city.

His latest tweet generated nearly double the number of views. But in much less time: 5.9 million in 24 hours. “I started working in delivery in September of last year -detail in the social network-. I have been gathering tips since then. A few hours ago I opened my piggy bank and had 2,118.50 euros“There he also added a photo of the coins.

Gonzalo’s “diary” allows you to take accounts: How much does a delivery man earn in Germany? And how much can you save? Clarion He spoke with him and two other workers, also Argentines. One of them, before arriving in Berlin, carried out the same activity in Copenhagen, Denmark. In that destination you can earn more.

Gonzalo Pérez in front of the Brandenburg Gate, in Berlin.

Every hour worked in Berlin is paid 10 euros. To that we must add 14 cents per kilometer traveled, plus tips. The average they get, they say, is one euro per order delivered. In addition, the application rewards them according to the number of orders delivered. It is an extra income.

Clarion also consulted workers who distribute in the City of Buenos Aires. Javier, for example, won $ 1,202 in just over three and a half hours of work. The day before he worked one hour less: he billed $ 577, at a rate of $ 223 in average income per hour.

In one night, only between the eight hours worked and the 23.10 euros that he claims to have collected from tips, Gonzalo added 103.10 euros. To that we must add what they pay him for kilometers traveled and the prizes.

Gonzalo lives in a student residence where he pays 300 euros for rent. On Supermarket, calculate a monthly expense of between 100 and 150 euros.

In April he published one of his pay stubs on his Twitter account: 2,225 euros between salary and tips. “I estimate that I will save at least 1,500“He said. And he adds:” Everything I tell is more to inform than to motivate others. I am interested in telling you that here, unlike what happens in Argentina, you can save by working “.

From Villa Devoto to Copenhagen

Leandro Serfaty (25) It is from Villa Devoto. He arrived in Europe in July 2019. After spending a few days in Madrid, he landed in Copenhagen, thanks to a visa that he had managed to work for a year.

Leandro Serfaty is from Villa Devoto. He has already passed through Madrid and Copenhagen and is now in Berlin.

He earned his first crowns (the local currency) by doing a changa: he was a moving assistant. Then he cleaned houses and offices through an application. He got tired and started as a delivery. He left for a while because of the cold. He was in a warehouse and later was a cook in a restaurant that closed due to the Covid pandemic. In March 2020 he returned to delivery.

“In a weekend I collected 4,000 crowns (537 euros). It’s a good job, and very comfortable: you don’t even need a good level of English. In Denmark I got to know 50 or 60 Argentines who worked the same. They pay 16 euros an hour“, he now tells from Berlin, where he does the same job. He lives in a residence where 15 Argentines live together: all are deliveries.

Leandro lives in a residence with other Argentines who also work as delivery men.

“The shift ends and with some Argentine friends we get together in a park or a house to eat or chat a little. Here you meet a colleague and you greet each other, even if you do not know him. It’s common, “says Leandro. He did it in Denmark and he does it in Germany. Now, in addition to working, he studies Web Programming and will start Photography and Video Editing.

MatiasAt the age of 18, he distributed through the dirt streets of Villa Fiorito. He did it on a moped whose engine overheated from time to time. He even came to work from time to time without brakes. Today he is 33 and does the same. The context is very different: ride an electric bike in Berlin.

“Be careful, it is not a job for everyone,” he clarifies. “It rains, it is cold; there are people who quit. But there are good things: you lack routine, because every day you go to different neighborhoods.”

And he gives details: “While I am driving I listen to Leo Mattioli or Pity Álvarez. While I wait for orders, I drink mate. And the landscape is great. I was recently able to buy a car. Anyway, I continue working with the bicycle. There is a good cycle path and there is respect for the cyclist. Before I worked as a waiter in Barcelona and Dublin. I don’t know why it hadn’t occurred to me before to be delivery “.

Matías warns that to work delivering in Berlin you must have legal residence.

In Berlin, according to the calculations of the three Argentines, almost half of the food delivery app workers come from India. All three also agree on something: it’s a temporary job, which allows them to save to study or continue traveling or stay in the city they want to live and know. Others take the opportunity to learn the language. And others help their families who remained in Argentina.

Matías warns that not all Argentine delivery men he knows work 40 hours a week. “You take out the economic difference if you work more than 30 hours. Denmark is the best country in Europe to do this. Then comes Germany. The point is that renting an apartment in Berlin for a family costs you 750 euros. For there it is only business or you can save if you are single and live in a residence, or if you rent with some colleagues “.

Another issue that clarifies is that to work as delivery, at least in Denmark and Germany, you have to be legal. He has Italian citizenship. “In Spain the accounts are rented and an illegal can work. But little is earned compared to Germany. The same in Italy.”

Gonzalo Peréz is the one who analyzes the numbers the most. “Besides money, I save time,” he says. And he details: “If you come and deliver for a year, you will save 18 thousand euros. Take out the account if you stay five years. I have friends who tell me ‘But you have a master’s degree, what do you do working in delivery?’. I answer that the numbers give me; that today delivery is the way or the tool for my true objective “.

Cycling in Berlin, a well-paid job.

Gonzalo is lawyer. He was received in Buenos Aires, at 23 years old. He came to Europe, applied for a scholarship and did a Master in “Economic Analysis of Law and Public Policies” in Salamanca, Spain. Then, he obtained a visa to live and work for a year in Germany. When it is finished, he aspires to stay in Europe and continue studying. That’s what he’s saving for in Berlin.

Gonzalo saves to stay in Europe and continue studying there.

There are two moments in your workday that give you pleasure. One, when he counts the coins of the tip and writes down the numbers for the night on his payroll. Two, when carrying a pizza, you look up and find yourself in the same place where the Berlin Wall was, or when you pass some other tourist or historical site. There, once again, he feels satisfaction.