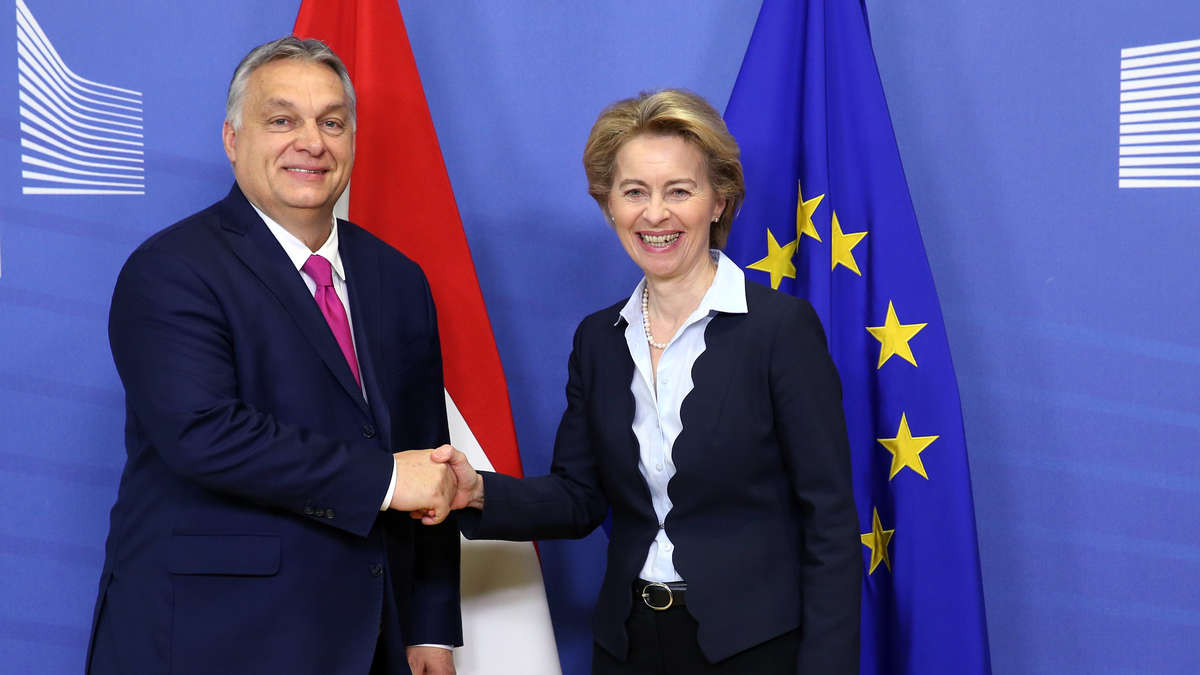 Recently, the dispute between Poland and Hungary and the rest of the EU member states has become quiet. But the silence is deceptive.

Brussels / Budapest – The EU legal dispute seems almost forgotten. And that despite the fact that the EU members had slipped into a violent conflict in December last year. At the time, Hungary and Poland blocked the adoption of the next seven-year budget with their veto – and thus also the EU’s Corona reconstruction package.

They wanted to force the rest of the EU to drop the planned rule of law mechanism. This stipulates that violations of the rule of law can be punished with a reduction in EU funds. Since Hungary and Poland had to accept allegations of a lack of independence of the courts and the restriction of the freedom of the press, the end of the mechanism was in their interest.

They did not achieve their goal. Because the other EU member states threatened to separate the Corona package, which is also included in the budget, from the budget – and without relaunching Poland and Hungary. In this case, Hungary would have received only six billion euros from the 750 billion euro Corona package and Poland only 24 billion euros.

In view of the impending loss of these enormous sums of money, Warsaw and Budapest finally gave in and a compromise was approved by the German EU Council Presidency. According to him, the European Court of Justice should first examine the rule of law mechanism before it comes into force. The regulation is of course not off the table. However, it will probably take some time until they are actually applied.

The Polish and Hungarian governments celebrated the compromise as a great victory – then there was silence around the conflict. However, the discussion could now reignite. Because the radio station “Klubradio” from Budapest is no longer allowed to broadcast on its FM frequency. This withdrew the right to broadcast content over the radio for the last independent broadcaster in Hungary. The station is only accessible on the Internet.

That was ordered by the media council of the Hungarian Prime Minister Viktor Orbán. A Hungarian court upheld the move. The EU Commission described the reasons for the decision as “extremely questionable”. The case again raises the question of press freedom in Hungary.

In Hungary, most of the critical media have already been bought up – or they had to shut down because they no longer received state money for advertisements. In Poland, too, private media are financially dried up. An advertising tax serves as a lever here. Freedom of the press is also an endangered good in Slovenia. Because Slovenia’s Prime Minister Janez Janša attacks the media and individual journalists in public.

The director of the Media Council, Monika Karas, reacted to the international criticism of the withdrawal of the broadcasting rights of “Klubradio”. A detailed letter explains why the frequency could not be extended for legal reasons. It was specifically stated that there had been competitors and that the radio station’s operators had failed to submit their quota reports on a number of occasions.

The accusation: undermining the rule of law

European State Minister Michael Roth (SPD) ruled in the World on Sundaythat the procedure is characteristic and dangerous at the same time. In this way, the rule of law is not suddenly and obviously abolished, but slowly being undermined and eroded. That happens in both Hungary and Poland. Roth appealed that nobody in Europe should turn a blind eye to this development.

You have to take all available means against it. In this context, Roth proposed the Article 7 procedure in addition to the rule of law mechanism in the EU budget. With this, EU membership can be withdrawn in the event of a violation of the basic values ​​of the European Union. However, Article 7 must be implemented unanimously by the states. Accordingly, the EU can theoretically take action against the renewed violation of the rule of law in Hungary, but in fact it will be difficult – for example in the case of an alliance between Hungary and Poland against the measures.

At the moment, however, there is at least one other symbolic measure in the room: the exclusion of Hungary’s ruling party Fidesz from the European People’s Party (EPP). As the World on Sunday reported, there is already a draft amendment to the Group’s Rules of Procedure. This could not only exclude individual MPs, but also all representatives of a party. In any case, the hurdle for implementing this measure is comparatively low. The parliamentary group wants to discuss the draft as early as the beginning of March.

New leverage against Orbán: CDU and CSU could decide

If the new rules of procedure come, a motion for exclusion could soon be on the agenda. A decision would then also depend on two particularly influential EPP members: CDU and CSU.

Meanwhile, there is hope for “Klubradio”: The international criticism of the restriction of press freedom in Hungary and the scenarios described could save the radio station from its precarious situation. The media council has announced that there are no more competitors. Accordingly, the radio station “Klubradio” can hope to be able to broadcast again on the radio. (at)

In the clinic, the head of the Russian president lifted the ban on fidgeting on chairs