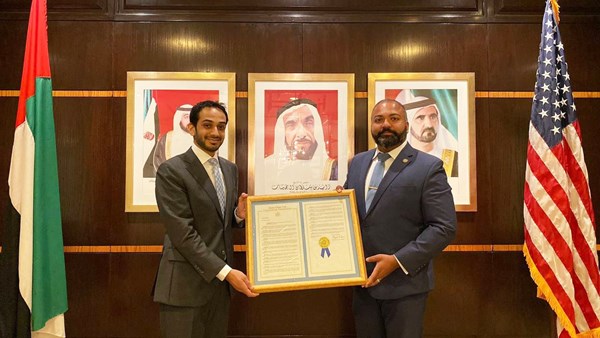 Senator Kevin Thomas, a member of the US Senate from New York, submitted a resolution to the House of Representatives to designate December 2, 2021 as an “Emirati Day” in New York State, in celebration of the fiftieth anniversary of the founding of the UAE. Senator Thomas said: The Emirates and the State of New York are linked by strong relations, their fields vary between trade, education and others. New York State also continues to be one of the most popular destinations for Emirati students who seek various educational opportunities. On this occasion, I am pleased to take this opportunity to highlight the fiftieth anniversary of the UAE “Year of the Fifty” and its importance in the history of the UAE, by declaring December 2, 2021 “Emirati Day” in New York State.
For his part, Abdullah Shaheen, Consul General of the State in New York, said in this regard: In December of this year, the UAE celebrates the fiftieth anniversary of its founding, as well as the 50th anniversary of its friendship and joint work relations with the State of New York. Well-established and solid in multiple aspects, including commercial, technical, sports and educational. Here, I would like to thank Senator Kevin Thomas for his kind initiative to commemorate the 50th anniversary of the founding of the UAE in New York State, which reflects our shared understanding that the future of friendship between the UAE and New York is constantly growing.
It should be noted that Senator Kevin Thomas was born in Dubai, and immigrated with his family to New York at the age of ten. The senator represents the sixth district of the New York Senate.