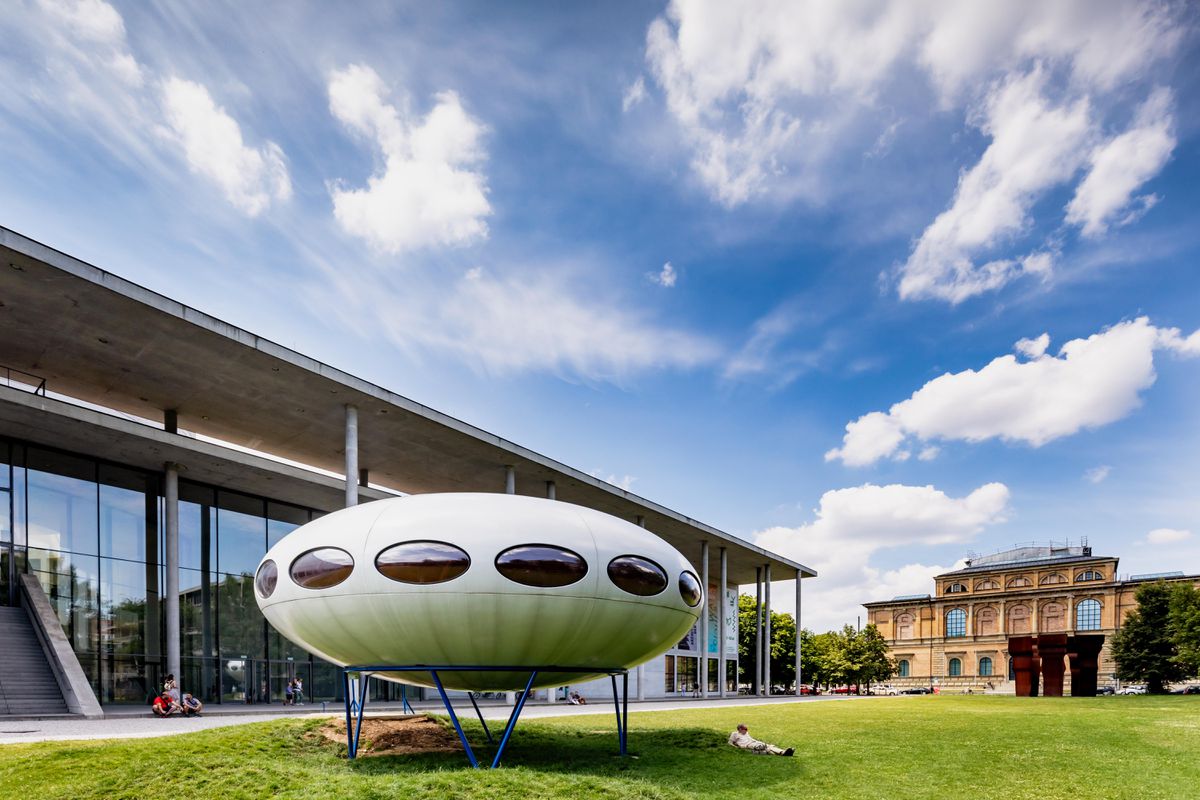 At the end of the fifties, driven by the technological optimism that emerged after the Second World War, the world of architecture began to explore industrialized building systems that could be applied in all types of buildings, but specifically in homes. The idea was not to build but mass production repeatable models that would be assembled quickly and easily, which would be a significant advance over the old traditional brick and wood techniques, slower and more expensive. Leading architects such as Eero Saarinen, Mies van der Rohe or Charles and Ray Eames worked on these investigations, offering formidable results and true masterpieces of modern architecture, such as the Californian Case Study Houses. Prodigies of industrial elegance that would inaugurate an American architectural tradition.

A decade later, and for more disparate reasons (perhaps the nascent philosophy new age, the hippism or the influence of the new television science fiction, from Star trek until Lost in Space), a few of these experiments were shaped like UFOs: cylindrical modules made of curved aluminum or polyester sheets that were designed and built in aeronautical facilities because their methods were much more similar to those of an airplane or a boat than to those of a little house in the field. The prefabrication was not limited to the assembled parts but to the entire house. The machine left the factory completely finished, mounted on a truck and deposited wherever its owners wanted.

However, the vast majority of these prefabricated cylindrical dwellings remained in temporary pavilions and ephemeral architecture. At least in the West, because in Taiwan they said that nothing of that, that they were going to mount a resort coastline built on the basis of that type of housing: the UFO village of Sanzhi.

Raised in the late 1970s, the town was intended as a luxury facility for US Army officers stationed at bases in the Pacific. The works began in 1978 and twenty-one modules were installed, each one made up of 16 UFOs made of polyester reinforced with fiberglass painted in different colors. In total, 126 pink, blue, green and yellow UFOs. Of course, the forecast was to install 500 UFOs that would serve as housing about 2,000 people.

But they were never finished. Construction came to a halt in 1980 after a few inexplicable accidents occurred on the adjacent roads that caused considerable panic among the superstitious workers at the complex. Local legend says that it was all the fault of a curse unleashed when the roads to the new town were widened. That to carry out the matter they had to cut off the head of the sculpture of a dragon that served as an access door. The dragon was very angry at having lost his head and cursed the works, causing fatal accidents and condemning the town to a future of bad luck.

Other gossip claims that, in addition to the headless dragon, the site where the resort It was on top of a Dutch World War II military cemetery, which gave the story an extra bit of cinematic sinisterism, because it looked a lot like the movie. Poltergeist but replacing the idyllic haunted American suburb home with multi-colored plastic UFOs. Also delighted, yes.

It would be epic if hordes of Flemish ghost soldiers had wandered there under the ominous shadow of a gigantic headless dragon, but sadly, the explanation is far more mundane. Investors simply ran out of money.

The resort Sanzhi’s study didn’t work out because assembling, moving, and assembling the UFO houses was much more expensive than it first appeared and costs skyrocketed. In the end the works were stopped and the thing was left in a state of increasing and progressive decrepitude. The artificial lakes that animated the complex were never filled and the pools and slides were never used because the UFOs never had a single inhabitant inside. Neither American nor terrestrial nor from another galaxy.

For nearly thirty years, the resort It remained abandoned and in a state of ruin, until, in 2008, and in view of its unsanitary conditions, the authorities decided to demolish it. Some inhabitants of the area asked that at least one of the modules be preserved, as a symbol of a future that never came, but they were ignored. To this day, there is only grass on the site of the UFO city of Sanzhi. Not prefab cylindrical houses or swimming pools or Dutch ghosts or headless dragons. Luckily for those interested in urban eccentricities, Taiwan’s property developers did not seem to be completely in their right mind, because when Sanzhi failed, they did not give up the effort to make a UFO town and decided to build something similar only 30 kilometers away, in Wanli Prefecture.

Unlike Sanzhi, Wanli used two well-known prefabricated housing models: the Future house and the Venturo house, designs both by the Finnish architect Matti suuronen, early seventies. The Venturo is an elegant parallelepiped with rounded edges that was a worldwide success. Many were manufactured – and are manufactured – although the majority were destined to stands, coffee shops pop-up and ephemeral architectures of that type. The Future practically imitates the collective canon of what a flying saucer is, all that remains is for it to fly around on its axis while hooting like in a sci-fi movie from the series B of the fifties.

During the eighties and nineties, models of the Venturo and the Futuro were placed by Wanli, forming a kind of urbanization of chalets. freaks. The downside is that, while the house was cheaper to manufacture and assemble than a traditional construction, it was much more expensive to maintain, so most have been abandoned over the years.

The images that a walk through the UFO village gives away seem taken from the future. Filthy and precarious alien ships, some occupied, others destroyed by time and vandalization. Net curtains retrofuturists behind oval sheets of transparent plastic next to undulating furniture on which thick broken and forgotten televisions rest. Photographs that seem impossible to date, as if everything were part of the same semi-fossilized deposit a thousand years ago and that came from another galaxy.

Pedro Torrijos is an architect and has just published his first book, ‘Improbable Territories’, where he talks about this and other curious stories related to the world of architecture and urban planning.