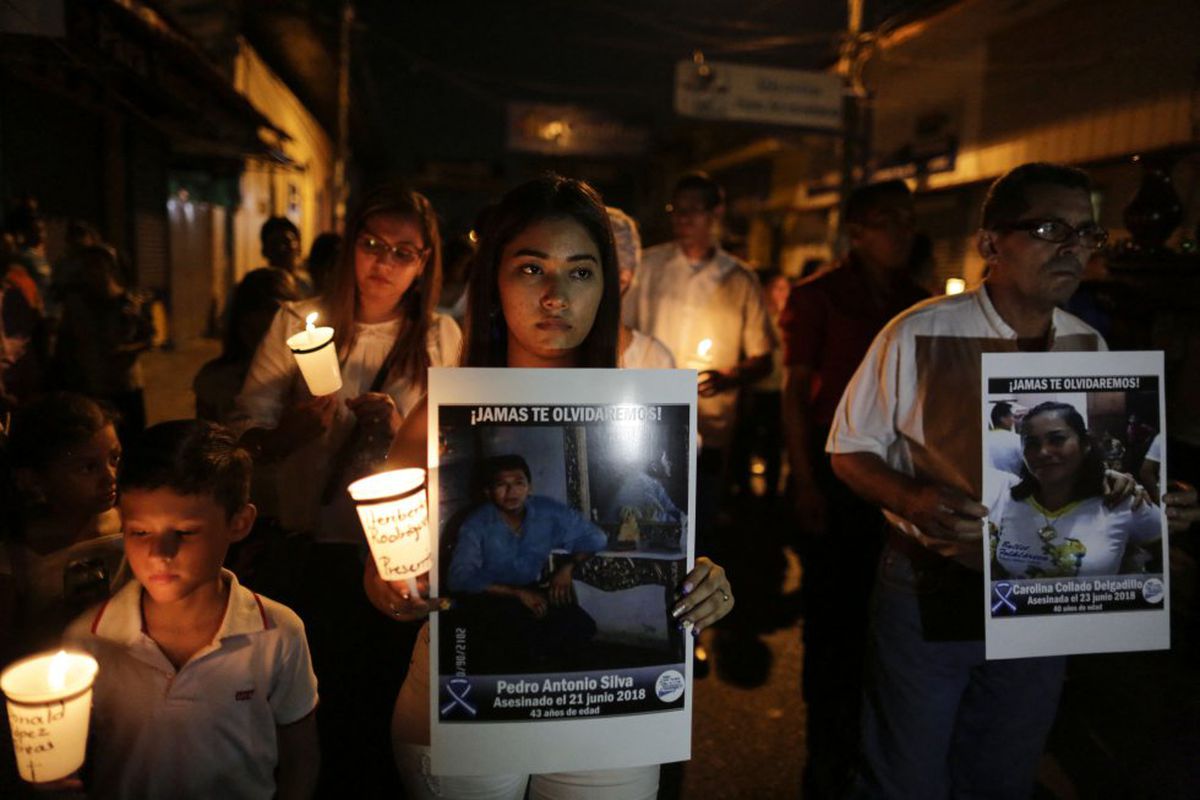 Violeta Granera has lost several teeth because the food they provide her in prison is very hard. The opposition leader has been in a dark cell for more than 210 days and the lack of sun has caused red spots on her face. The constant mistreatment hits his 70-year-old body and the cold of the newcomer in January makes the confinement more distressing. He does not have a blanket in which to take refuge on the bare concrete frame that badly serves as a bed. Police sentries also mock political prisoners like her in these first days of 2022. Their “supreme chief”, who gave the order to arrest them, Daniel Ortega, will impose the Nicaraguan presidential band on Monday after elections in which He didn’t have any kind of competition after stopping his main opponents.

With his new mandate, to which he arrives without international recognition and at the hands of his wife and “co-president”, Rosario Murillo, he seals a stage of repression and persecution for which he keeps 170 political prisoners. 36 of them – the main opposition figures in Nicaragua – are locked up in El Chipote, a prison where, according to reports from relatives who have managed to visit them very sporadically, they are suffering from malnutrition, mistreatment and hardly have access to their lawyers.

In the area of ​​the punishment cells of this prison formally called the Directorate of Judicial Aid (DAJ), Roger Reyes is devoured by a transitory psychosis. On November 22, 2021, the lawyer critical of the Nicaraguan presidential couple was thrown into a sealed confinement cell. The two meters long by two meters wide with only a hole in the ceiling in which he is confined have become a maze of depression and anxiety. “I’m losing my memory,” the political prisoner told his wife during an unprecedented visit that his relatives authorized this New Year, after a public complaint by mistreatment against the political activist Ana Margarita Vijil.

Reyes’ sin, in addition to being affiliated with the Blue and White National Unit (UNAB), is that he was a defense attorney for Félix Maradiaga, one of the seven presidential candidates arrested as of June 2021, when Ortega carried out a manhunt of 46 opposition leaders to eliminate all competition in the general elections on November 7. Ortega and Murillo declared themselves the winners of those elections marked by an overwhelming 85% abstention, according to the Urnas Abiertas organization, which interpreted the low turnout as citizen rejection of what many considered an “electoral circus” of Sandinismo.

The first visit allowed to some political prisoners occurred 80 days after the arrests. They were emaciated, with weight losses of between 13 and 36 pounds (between 6 and 16 kilos) due to poor diet; exhausted by perpetual and over-medicated interrogations. “They look like they came out of concentration camps,” the relatives said at the time. Over time, the situation has only gotten worse.

The former deputy Jose PallaisThe 68-year-old has lost 90 pounds. He is so weak that he has passed out twice. He has sores and abscesses on his back because the guards removed the mat on which he was resting. He suffers from diabetes and has been sleeping for a couple of months in a chair brought to him by his relatives due to the sleep apnea that afflicts him. The activist Ana Margarita Vijil, thin by nature, is so stunted that she asked her relatives for glasses as a child because hers fell off her face. Like Pallais, 12 of the 36 locked up in El Chipote are senior citizens and the most alarming: their pre-existing and chronic diseases have gotten out of control due to the lack of medical attention. Former ambassador to the Organization of American States (OAS) Edgar Parrales, 79, lacks a large intestine and lost 12 pounds (more than 5 kilos) in 40 days.

El Chipote has become the darkest dungeon of the presidential couple, but also a cornerstone of the repression that will allow Ortega to swear as president of Nicaragua on Monday, January 10, in the old plaza of the Sandinista Revolution. in Managua.

In their last public acts, Ortega and Murillo have in any case justified the closure of the opponents. For them they have used the qualifier of coup plotters, which they have been using since the 2018 protests, and they have also called them stateless . “They should be taken to the United States, they are not Nicaraguans, they stopped being Nicaraguan. They have no homeland, ”Ortega said on November 8, a day after the disputed elections. “To move forward we must banish the lack of love and any hint of indifference or servitude and servility to stateless interests,” insisted the presidential couple in an unusual message from New Years Eve, at a time when complaints of mistreatment in El Chipote were pouring out. One of the historic ex-guerrillas of Sandinismo, the 73-year-old retired general Hugo Torres, was taken in mid-December from El Chipote to a hospital in Managua “in a delicate health condition.” Torres, along with ex-guerrilla Dora María Téllez, led the mythical assault on the Somocista palace in 1978. Téllez is the one who is physically and emotionally stronger compared to her old dissident Sandinista colleagues, according to the relatives of the prisoners of conscience. She exercises, but is very skinny in isolation, since the guards do not allow relatives to pass food to political prisoners.

Some elderly detainees only ask for Ensure milk (a liquid food supplement) to alleviate hunger. On some occasions, they have managed to put some small boats in their cells and they are shared by political prisoners of different ideologies and sectors who are not in isolation cells. But they have to do it in silence, because the permanent custodians threaten them to prevent them from communicating with each other, the families say. Although at the time they disagreed on how to fight Ortega, in El Chipote businessmen share cells with former Sandinista guerrillas or right-wing politicians with activists who promote causes such as feminism and social democracy.

The repressive vortex of the Nicaraguan presidential couple has not distinguished origins and beliefs and a possible release on the occasion of the presidential inauguration is seen far from the radicalization of an internationally isolated regime, whose mandate was born from the ignorance of many countries, such as States. States and Spain. Madrid was the first capital to announce that it would not send anyone to the inauguration in Managua. Although the vice president has said that “about 300 people” from different delegations will accompany them at the investiture. Mexico, which had confirmed the presence of its representatives, announced Sunday night that “no official from the Mexican Foreign Ministry would attend the protest.”

They are cruel to women

Family members of political prisoners have denounced that, in the case of women held in El Chipote, abuse is compounded by sexist attacks. The activists Támara Dávila and Suyén Barahona are isolated and are victims of psychological abuse: the police repeat that they are “bad mothers for abandoning their children for protesting against the Government.”

Mothers and wives of political prisoners also suffer harassment during visits to El Chipote. The searches to which they are subjected include “touching, removal of clothing and underwear.” Ana Chamorro de Holman, 94, said that when she went to visit her son Juan Lorenzo Holmann, general manager of the newspaper The Press, the custodians the they forced to drop her pants and take off her bra. Despite this invasive screening, the woman continued with the process and found her son with near-blindness and heart problems. Some political prisoners are kept in cells with light 24 hours a day, while others live in darkness. However, the inmates cannot calmly relate to their families what is happening to them, because the visits are always monitored by police. Even, they denounce, the officers take photos and videos of the encounters without consent.

Lawyers for political prisoners are also unable to exercise effective defense. Not only because they hardly have access to their clients, but because the causes of the alleged crimes they are accused of – treason, money laundering, cybercrimes – respond to laws made to measure by the National Assembly related to Ortega to criminalize the opposition and are not yet reflected in the Judicial Power system. “The objective is to make them invisible and remain defenseless,” the relatives of the detainees said in a statement. “The interrogations continue in the absence of the lawyers and all the petitions presented are denied or not resolved. Due process has not been respected and its procedures have been de facto suspended, alleging workload, vacations or decisions of force majeure by the judges, “the statement added.

Even the first trial hearings were held in the same prison in El Chipote and the defense attorneys did not even have case files. “We reaffirm our deep concern for the conditions in which they are kept and that they are causing irreversible physical and psychological damage,” insist the relatives of the political prisoners. Some prefer not to denounce publicly so as not to lose the few concessions that the sentries admit, such as allowing bottles of water to enter the prison.

The president of the Nicaraguan Center for Human Rights (Cenidh), Vilma Núñez, said that “it can no longer be called the Directorate of Judicial Aid (DAJ), but rather a torture center” after hearing the stories of the relatives of the political hostages. “There is a macabre exhibition inside El Chipote so that the prisoners collapse and those of us outside, the companions and relatives, collapse,” Núñez emphasized. Collapses like that of Lesther Alemán, the student leader who, at just 20 years old, faced and asked Ortega to “surrender” in the 2018 national dialogue. The university student could not even stand up in a trial hearing and, disoriented, It said, “I’m hungry.” Currently, Alemán suffers from malnutrition and limps on one foot in El Chipote, while his captor will celebrate “a new mandate of the president people ”, as Rosario Murillo has called Ortega’s new swearing-in on Monday.