Daniel Ortega criticizes the Catholic Church: “It is a perfect dictatorship” 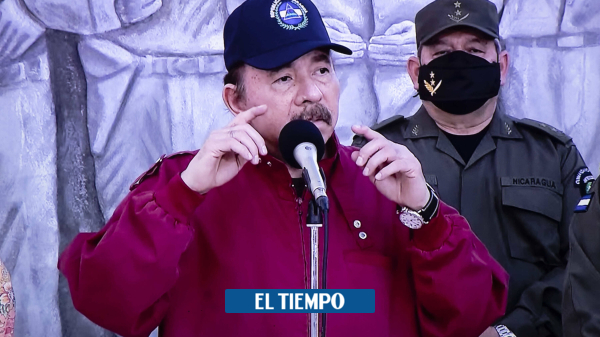 The Nicaraguan President, Daniel Ortegaaffirmed this Wednesday that the Catholic Church is a “perfect dictatorship” for not allowing the majority of Catholics to elect the Pope and the rest of his authorities.

(Also read: Controversy over a couple who dyed a waterfall blue to reveal the sex of their baby)

(Also: Guatemala: They are looking for a mother and daughter who were “swallowed” by a gigantic sinkhole)

“If they are going to be democratic, let them begin to elect the pope, the cardinals, the bishops with the Catholic vote,” he insisted during a speech on national television, on the occasion of the 43rd anniversary of the national police.

See also  Apple without brakes: it is worth more than Amazon, Google and Meta combined!

During his speech, Ortega again branded the bishops and priests as “assassins” and “coup plotters” for the support that, according to his government, the temples gave to the opposition protests in 2018.

(Of interest: Woman set her ex-boyfriend’s car on fire while holding her baby in her arms)

If they are going to be democratic, let them begin to elect the pope, the cardinals, the bishops with the vote of the Catholics.

The demonstrators “came out of the churches, not from all of them, armed to launch attacks against the police stations (…) and some priests calling on the people (to) put lead in me,” Ortega reproached.

Relations between the government and the Catholic Church have deteriorated since the 2018 protestswhich the president linked to an alleged failed coup plotted by the opposition with the support of Washington.

(Keep reading: Why are US sanctions on Venezuela limiting relations with Colombia?)

The conflict intensified last August with the arrest, under house arrest, of the bishop of Matagalpa Rolando Alvareza strong critic of the government.

At least four priests and two seminarians have also been arrested without specifying the charges against them.

The police prohibited religious processions. Last March, the Vatican reported that the apostolic nuncio Waldemar Sommertag was expelled from the country.

Months later, in July, the government outlawed the Missions of Charity association, created by Saint Mother Teresa of Calcutta, and its nuns had to leave the country.

(Also: Bogotá-London flight had to make an emergency landing on an Atlantic island)

In the middle of this month, Pope Francis admitted that there was a “dialogue” with Nicaragua regarding the arrest of several members of the Catholic Church, but its progress is unknown.

– The sea disappeared in Tampa before the arrival of Hurricane Ian in Florida: video

– United States: several injured in a shooting at a California school

– Hurricane Ian: journalist ‘protects’ his microphone with a condom during transmission

The Russian Embassy responded to US statements on Nord Stream