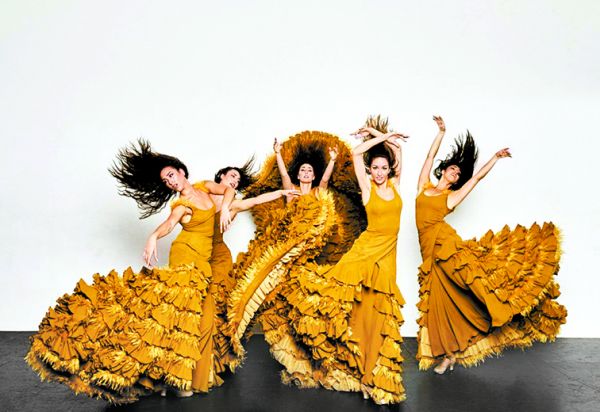 Antonio Najarro’s career began at the age of 15: classical ballet, bowling school, Spanish classical, folklore, flamenco and contemporary dance have been part of his training in the arts.

The dancer and choreographer was director of the National Ballet of Spain in 2011, in addition to being the creator of pieces for great figures of figure skating.

The Spanish artist is currently in Mexico, invited by the International Contemporary Iberian Dance Festival, in Querétaro, where he teaches flamenco classes with castanets and stylized dance, as well as presenting three pieces from his latest show, Alento. “Here you will see my real style as a creator,” he says in an interview with MILLENNIUM.

The Madrid-born artist considers that “the Mexican has a factor very common to the Spanish and it is strength, energy, vivacity, way of life and expression. Spanish dance is full of expressions, it is full of emotion and the Mexican assimilates it very well and expresses it very well, that is why I think there is such a love for Spanish dance. We speak the same language, so to speak, when it comes to art. Uniting Spain with Mexico, through Spanish dance and flamenco, is something perfect ”.

That Spanish art has crossed borders, for the creator is an exhibition that “teaches us that dance, through emotions and sensitivity, unites countries. I believe that everyone moves through emotion and sensitivity. Spanish dance is full of emotion, far beyond technical preparation, and the truth is that I feel very happy ”.

Pleased because the International Festival of Contemporary Iberian Dance has presented various galas and shows both in theaters and in public squares, Antonio Najarro declares that he is “an advocate that theater and dance must be seen live because feeling the energy of the artists is something that has to be lived ”. As for the power of dance, he expresses that it lies in “that the artist manages to speak from the heart with movement, and that is understood by everyone. It is something very understandable by everyone; You don’t need language, you just need to know how to express and move perfectly to transmit emotion through movement ”.

The audience at the festival enjoyed Alento, a choreography that unites all styles of Spanish dance in an innovative way, as well as an international and plural approach thanks to the music written especially for the show by Fernando Egozcue, which includes reminiscences of tango and jazz .

According to the play program, it is a music “full of sensitivity, totally descriptive, overwhelming and with nuances very much in the line of his creations, where roots are breathed and at the same time a search for new sounds and new cadences ”.

The dancer and choreographer firmly believes that dance is so capital that it encompasses all kinds of artistic movement. Such is his idea that his creation has led him to painting, choreography for fashion shows and sports (figure skating on ice and synchronized swimming).

“I started in figure skating in 2000 and I have turned skaters into real dancers. That has been my job: working with them in the studio, not on the ice first, but in the studio; take maximum care of the costumes, the music, the dramaturgy of their programs and create true ice dance works. I think that has been the success that has led to winning so many gold medals, because this strategy has made the figure skating programs thrill the public who is watching them ”.

With one of their choreographies, the couple of Marina Anissina and Gwendal Peizerat won a gold medal at the 2002 Winter Olympics. By collaborating with Stéphane Lambiel, the world champion took gold at the same games in 2006-2008, while Javier Fernández achieved the same at the World Championships in Boston in 2016. _