Customs launches a ship to ‘hunt’ narcolanchas in Galicia 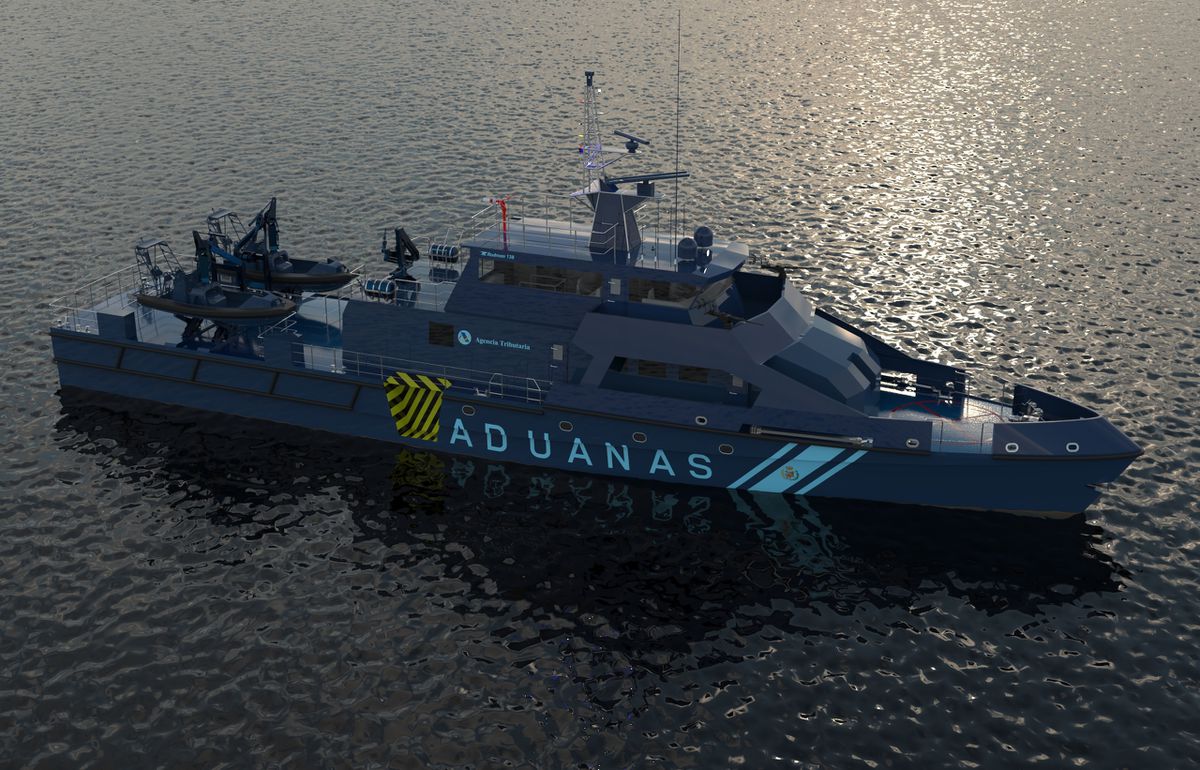 In the waters of the Rías Baixas, one of the battlefields against drug trafficking, the Tax Agency has incorporated a new patrol boat to the extensive fleet of the Customs Surveillance Service (SVA) to counter the latest technologies used by mafias in maritime transport of the drug. What makes the new ship different from conventional ones is its state-of-the-art design and its ability to sail 2,000 nautical miles (about 3,700 kilometers) without refueling. At 43 meters in length, the Condor reaches 23 knots of speed; The two auxiliary vessels that he has on board will be used to carry out narcolanche chases and provide support to the crews that assault the mother ships.

At the Rodman Polyships shipyard where the ship was built, in the Vigo estuary, the new SVA flagship was launched last Thursday, in a ceremony attended by the staff of the Tax and Customs Surveillance Agency. The firm that designed it has specialized in the construction of patrol cars for military and police forces.

The paradox is that ships for historic smugglers have also left this same shipyard. While the firm was preparing the ships for the Civil Guard at the end of the eighties, the then cigar maker Laureano Oubiña commissioned Rodman a boat to transport packs (although he also ended up unloading hashish). The data was collected in the session diary of the Operation Nécora trial, when the prosecutor Javier Zaragoza asked Oubiña about the famous shuttle Zaratti, which it had built in Rodman and paid for through a Panamanian company, Alfa Omega Productos Alimenticios SA

The drug trafficker boasted to the court that his boat was faster to dispose of tobacco than those that the Civil Guard had ordered in the same shipyard to suppress smuggling. He declared that it had cost him 75 million of the old pesetas compared to the 315 that the armed institute had paid. “Mine had two 1,480-horsepower engines, while those of Colonel Ayuso’s patrol boats had a power of 750,” commented Oubiña ironically. “That didn’t even sail backwards,” he settled, causing laughter among his teammates on the bench.

The Zaratti It was a local boat for packing tobacco, but it also ended up unloading hashish. It was seized six years after the Operation Nécora trial, when the Galician capo was on probation and was detained for a shipment of more than 12 tons of hashish aboard the mother ship Regina maris.

The Condor takes its name from the saga of six vessels seized from the criminal organizations themselves in the 1980s and 1990s. Turned into camouflaged Customs patrol boats, these vessels were involved in numerous operations in a particularly intense period of the fight against cocaine trafficking and hashish in Spain.

The first ship of this peculiar fleet was incorporated at the end of the eighties, when the pleasure yacht type vessel was captured Yasmine, which had belonged to the Greek shipowner and billionaire Aristotle Onassis, and which in his active life had other owners, including actor Richard Burton.

Confidentially, the Yasmine became part of the Customs Surveillance fleet under the name of Condor I, and secretly took his participation in various special performances. His crew was not in uniform. The ship was painted white and pretended to belong to a scientific institution.

Another example of the saga is the Condor III, which was actually the Smith Lloyd Off Cairo, standard-bearer in Saint Vincent and the Grenadines and one of the flagships of the Galician narco Sito Miñanco. This type tug supply was provided, like the new Condor, with two powerful gliders on board. The task they had was to lighten the tobacco that the nurse was carrying and transport it to land, avoiding the outward journey of the boats. He was seized with 1.5 million packs in May 1990, a month before Operation Nécora broke out.

The new patrol car Condor It already has the most modern means of navigation and communications. It will be equipped with a state-of-the-art optronic system for the detection and monitoring of vessels, as well as a specific secure communications system to prevent cyberattacks.

In full escalation of drug trafficking, the decree law that prohibits the navigation of high-speed boats, has had its effects, mainly in the Campo de Gibraltar, since it came into force in October 2018. “We have seized 500 boats and it has been a turnaround in the way of acting of the trafficker because he has run out of maritime means, for this reason they have resorted to robbery between gangs to continue operating ”, confirms Manuel Montesinos, deputy director general of Special Customs Operations.

But the drug business does not stop. From the beginning of 2019 to date, the Customs Surveillance Service has carried out 140 actions. The result has been 19 tons of cocaine and more than 200 of hashish seized. “Drug trafficking will continue to be unstoppable as long as there is demand, markets willing to buy and consume,” says Montesinos. “Drug trafficking will not disappear in the same way that there will be robberies in supermarkets, but we work tirelessly and forcefully to counter it, with maritime intelligence systems or big data to detect money laundering networks,” he says.