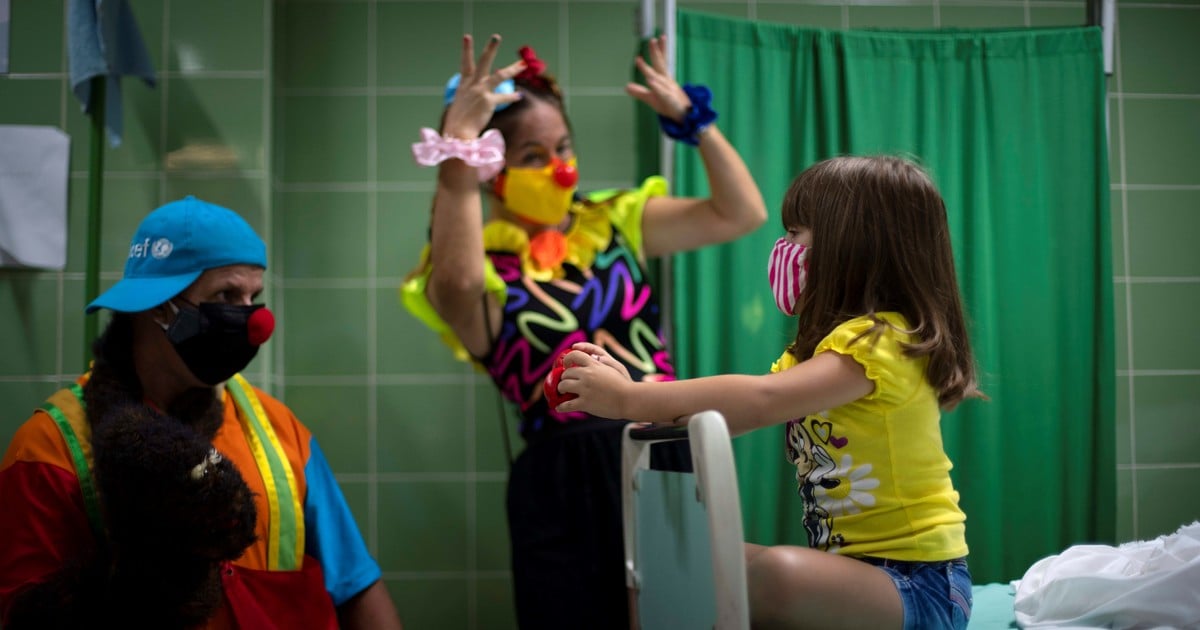 While fighting against an increase in coronavirus infections in several central and western provinces of the country, Cuba reached the last stages of the studies of one of its vaccines in children and young people.

About 300 minors between the ages of three and 18 This week they received the third dose of Phase I and II of the clinical trials with Soberana 02 – two applications – and the last with Soberana Plus, a scheme that the authorities also stipulated for adults. They were injected every 28 days.

For inoculations in children, Tuesday supplies donated by Cubans residing in Great Britain were usedThe Associated Press found in a hospital in the capital.

“We have a lot of faith in Cuban science and the effort they have put into it. It’s super exciting and the peace of mind that the girl becomes immunized, ” Meiter Lemus, a 45-year-old cyber engineer who accompanied his little 8-year-old Flavia to receive her third dose, told AP.

Checkup as a step prior to vaccination in Havana. AP Photo

“We did a family discussion so that she understood and gave her consent. She feels how important it is that she can help even other children”

The little ones are cared for by nurses who take their vital signs and data before receiving the injection and then have to wait at least an hour in an adjoining room together with their tutors for doctors to review. The hospital put clowns on them, especially to entertain the little ones and avoid stress.

Flavia Lemus squeezed her father’s hand as she prepared the syringe with her dose and before they both counted seven out loud she was already vaccinated. He did not suffer immediate reactions.

The Finlay Institute, creator of Soberana 02 and Soberana Plus _which obtained emergency authorization for adults last week_ received medical supplies such as tubes for collecting special samples and reagents for this pediatric assay.

“We have proven that it is a safe vaccine,” Yaricel Ricardo, the coordinator of the pediatric trial with Soberana, told reporters, for whom the objective is “to bring children to have protection to prevent them from reaching serious forms of the disease or have sequelae that affect their quality of life afterwards and above all avoid death ”.

A girl receives the Sovereign 02 vaccine in Havana. AP Photo

The experts no incidents were reported of health after the application of vaccines.

“How good to think that there are Cubans in other latitudes who are also interested in helping, it is a very noble act” added Dr. Ricardo Cubas, investigator of the trial.

The official newspaper Granma reported over the weekend that the island had received some 500 official and non-governmental donations of all kinds, from food, oxygen and fuel for hospitals, to syringes and masks from places like Thailand, Canada, Mexico, Argentina, Bolivia, China or Italy.

Cuba has another vaccine, Abdala, created by the Center for Genetic Engineering and Immunology and with which a massive campaign is also being carried out.

The island crosses a tough economic crisis It makes it difficult for him to get many of these disposables, as well as medicines for the treatment of the sick, which have increased in a regrowth in recent months under the influence of the Delta variant of COVID-19.

Already vaccinated, a girl waits with her parents. AP Photo

This Tuesday, the director of Epidemiology, Francisco Durán, indicated that since the beginning of the pandemic in March 2020, 602,526 infections and 4,710 deaths.

The most complicated regions they are the province of Cienfuegos in the center of the country and Pinar del Río, where health services showed saturation and medical brigades were displaced from other regions that have already overcome the outbreak, such as Matanzas.