Cristina Kirchner, harsh with justice for the pact with Iran: ‘it is an institutional, judicial and political nonsense’ 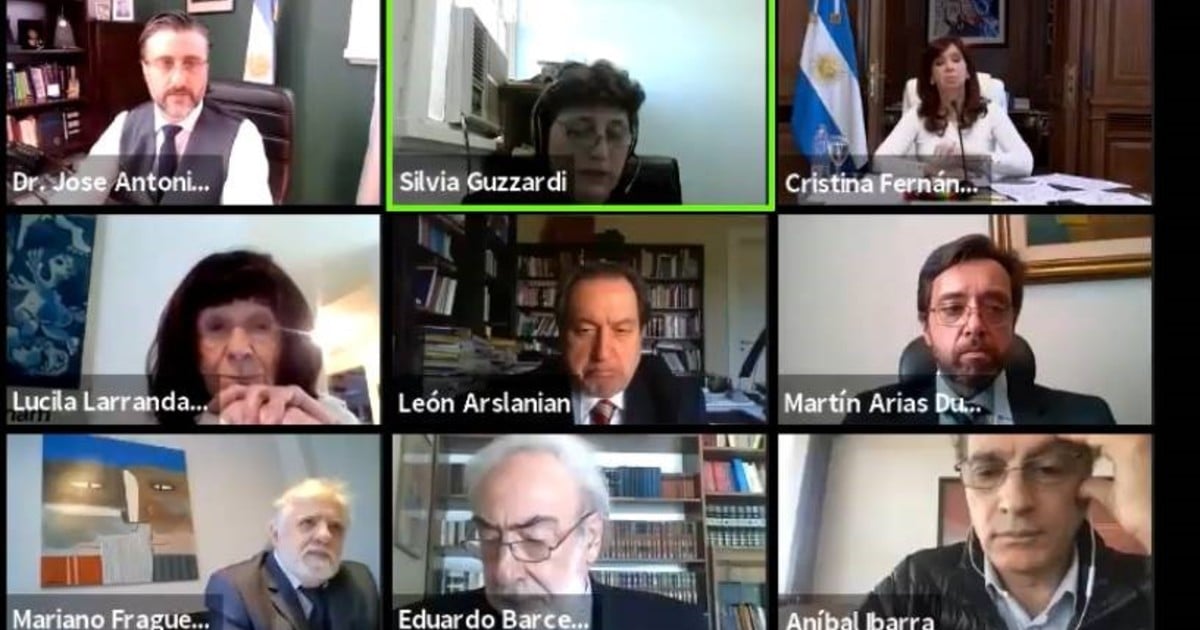 Two and a half hours after the relatives and victims of the AMIA attack commemorated the 27th anniversary with the slogan “Connected against impunity”, in a virtual way began in Comodoro Py a hearing requested by Cristina Kirchner to expose the arguments on the basis of which you asked for the case to be annulled brought to trial where she is accused of aggravated cover-up of the attack on the Jewish mutual society. As expected, the vice president shot at justice: “This case is an institutional, judicial and political nonsense.”

The members of the Federal Oral Court 8 (TOF 8) participate in the hearing. José Michilini, Gabriela López Íñiguez and Daniel Obligado, the prosecutor Marcelo Colombo and the defendants who required this space to defend themselves against the accusations. There will be three proposals that will be heard this Friday and the TOF set deadlines for 45 minutes for each exposure.

From her office in the National Congress, Cristina was the first to speak during the hearing chaired by Judge Gabriela López Íñiguez. Prior to hearing his discharge, the TOF 8 secretary reported that on Thursday at the last minute, various requested tests were entered: income and expenses to Quinta de Olivos, a testimonial statement from the judge Ana Maria Figueroa that he had spoken of pressures during the previous administration, resolutions related to the case, documentation from the UFI-AMIA.

With the papers on her desk, the annotations in order, the vice president opened the hearing. “They accuse us of being cover-ups for the maximum attack that our country suffered.” The idea is “from the simplest logic of the judicial, institutional and political nonsense that is this accusation”.

To dismiss the accusation regarding the cover-up, the vice president said: “When the AMIA attack happened, Andrés Larroque was 17 years old when the AMIA attack occurred. Juan Martín Mena was even younger, he should be taking a school course . Oscar Parrilli, perhaps he even had hair, had lost the justicialist intern and had approached the Frepaso. Carlos Zannini was the Minister of Government of Néstor Kirchner who was going through his first governorship. Where was I? Sitting on a bench in the legislature of the province of Santa Cruz. We had no contact, and this is not minor“, He said.

Then he again targeted Mauricio Macri. He expressed that the Executive Power barely arrived at the Casa Rosada “sought to handle justice to use it as an instrument of persecution against the political leadership “, and he resumed his theory of lawfare in court again.

She elaborated on this aspect, and pointed out that both she and former members of her cabinet and her own family were “victims of fierce persecution”. In explaining this accusation, he referred to two government control bodies of Macri’s management, the Anti-Corruption Office, the Financial Information Unit, as well as the resignation of Alejandra Gils Carbó from the Attorney General.

But Cristina emphasized the OA and the FIU, “fThey were used to prosecute improperly and abnormally, The AFIP was also used to specifically persecute my family, more than 30 thousand income to the places where my children and mine contributed ”.

The vice president went further, and pointed against magistrates of Comodoro Py where she has seven causes for corruption: “Judges who do all kinds of things are hired, who sign whatever“In this case, an attempt was made to put an Oral Court to the finger, this fortunately was aborted by the Supreme Court, but it was going to constitute one of the biggest judicial scandals in memory, like this one today,” he remarked.

In this institutional context, “the State is prepared to serve as an instrument of persecution of a sector of politics of which I am the head“.

The cause known as Pact with Iran began with the complaint of the late prosecutor Alberto Nisman accusing the then president of the Nation and several members of his cabinet of cover-up for the signing of that document, through which – Nisman affirmed – se sought to benefit the accused Iranians of being responsible for the largest terrorist attack in our country. The case was taken to oral trial in 2018, but TOF 8 must now decide whether to cancel the proceedings and dismiss the accused, or encourages the oral debate.

The annulment requests that give rise to the controversial hearing were formulated after knowing that two members of the Chamber of Cassation, Mariano Borinsky and Gustavo Hornos, visited the Casa Rosada and the Quinta de Olivos during the presidency of Mauricio Macri. Both intervened in the resolutions that confirmed the progress of the case towards the oral trial.

This Friday’s hearing has no record, since it is before the Court that you must carry out the trial. In March, Cristina Kirchner made a political defense before the Chamber of Cassation against the accusations related to the operations with the Future Dollar. On that occasion he also requested the annulment of the file, something you got: the judges considered that what was investigated as a criminal maneuver it was just a political decision that it could not be prosecuted, and they ordered the dismissal of the accused.