Covid’s victims in Brazil may already be 700,000, shows estimate 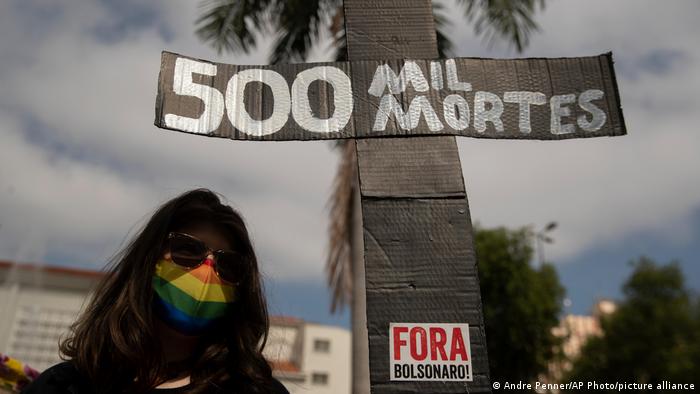 Brazil has been a rare case worldwide of accumulation of errors in the fight against the disease since the official registration of the 1st confirmed case of covid-19, on February 26, 2020. Almost 16 months after patient 1 (in official statistics), the country surpasses the tragic mark of half a million dead and almost 18 million confirmed infected, as stated in the panel world of Johns Hopkins University on the afternoon of June 18, 2021. The worst part is that the scenario, scientists warn, is certainly darker, and the size of the tragedy larger and more alarming.

Statistical studies conducted by Brazilian scientists indicate that, both in terms of deaths and the number of people infected by the coronavirus, underreporting reaches high levels. Lack of clarity about the real picture is an obstacle to more rational implementation of public policies and often supports the false sense of disease control.

Victims would be up to 700 thousand

The most realistic number of deaths in Brazil today should be around 700,000, with the possibility of the country reaching 1 million deaths by the end of the year not being ruled out, as he told the DW Brazil the infectious disease physician Ana Luiza Bierrenbach, author of a study on underreporting in the country. The research conducted by her, who is a senior technical advisor at Vital Strategies, points out that Brazil has at least 30% more deaths and 60% more infected than official figures. “Actually, we’ve already reached 500,000 dead by mid-April”, he assures.

To disclose only confirmed cases, says the researcher, is “much more comfortable for governments”, in Brazil and in the rest of the world. “There is a tendency to start reporting confirmed and suspected cases, the probable ones, because the data is obviously smaller.”

However, for infectologists and epidemiologists, he adds, they need to see the more realistic picture. “What we advocate is to start talking not only about confirmed ones, but including in our daily notifications the number of probable and suspected cases. They need to make themselves known.”

The statistical study, which is dynamic and updated daily, is based on the SUS’s SIVEP-Influenza (Influenza Epidemiological Surveillance Information System). This database, which is publicly accessible, records cases and deaths of SARS (Severe Acute Respiratory Syndrome).

“We took all these SARS cases, those that were covid-19 and those that had no etiology, no etiological agent [causador da doença] determined. In 2018, 2019, the numbers were pretty low. happens a boom obviously from March 2020, and in this boom has many unconfirmed cases and deaths as covid. Since we did not find the etiology, the only possible explanation is that it is covid, or else in Brazil we are having a pandemic of another respiratory agent that we are not aware of. It can only be covid”, attests the infectious disease.

Open graves in the cemetery of Taguatinga, in Brasília. The country has the 2nd highest moving average of deaths from the disease in the world, only behind IndiaSérgio Lima/Poder360

“At no time did the country control the number of deaths”

In addition to the appalling number of lethal cases, immunologist Alessandro dos Santos Farias, diagnostic coordinator of the Covid-19 Task Force against Unicamp (State University of Campinas), points out that the main fear of the scientific class is that Brazil will produce an aggressive variant that will take the country to square one. “The production of variants is related to the number of people infected. And we are the perfect portfolio of new variants, of replicating viruses: we have slow vaccination with high contamination”, explained Farias, in an interview with DW Brazil.

For the researcher at Unicamp’s Biology Institute, who coordinates an innovative testing program, the number of infected people today should be approximately 50 million people, that is, almost 3 times greater than official statistics record. It cannot be said, according to him, that Brazil would be entering a 3rd wave now. “Brazil is one wave. They are peaks within the same wave. The country, at no time, controlled the number of deaths.”

The possibility of emerging a new variant for which there is no vaccine coverage, says the researcher, is great precisely because of the gigantic number of infected people. This month, Farias and Unicamp specialists will start an unprecedented survey, by sampling, which will detect the variants in all 11 regions of the state of São Paulo by PCR, in a faster and cheaper way, without the need for sequencing of the virus.

No prospect of mass testing

Brazil, sustains Alessandro Farias, has no national perspective for mass tests to be carried out. “The testing of symptomatic patients has diagnostic value, but it has no epidemiological value. We don’t have a very good idea of ​​what’s going on, and we have no prospect of mass testing at all”, it says.

Unicamp, in the task force coordinated by Farias, has already managed to test 200 thousand people, equivalent to 20% of the population of Campinas. In Brazil as a whole, the researcher points out, the federal government tested only 135,000 people. The research and application of tests by Unicamp were financed by the Public Ministry of Labor.

National mass testing programs, as Germany did, highlights the immunologist, are crucial to managing the opening and closing of services and schools, for example. “Germany even tested 500,000 people in a single day”, exemplifies, adding that the European country, like Brazil, has problems with the speed of vaccination. However, it invests in testing.

When vaccination is quick, explains Farias, the monitoring of variants is more effective because the transmission rate is slower, which is not the case in Brazil. “We were rooting for us not to generate anything that would lead us to start from scratch again. But it can happen. We may have a variant where the vaccinated and recovered have no protection. Then we started a Brazilian epidemic from scratch. That’s what scares me the most for the future. The present is already dismal: 2,700 deaths a day is a World Trade Center per day.”

The national production of vaccines, by the Butantan and Fiocruz Institute, observes the researcher, is the most intelligent and important measure taken in the country so far. “We believe that we are not going to get rid of this virus ever again. I don’t know if we will have to vaccinate the population every year, but we are going to live with the virus and we need to monitor it. It is very important for Brazil to have the capacity to produce vaccine itself.”

Physician Ana Luiza Bierrenbach explains that as the database that was the basis for the underreporting study only records severe cases of respiratory distress syndrome or people who died in the hospital or outside, or were hospitalized, the statistics are certainly conservative. It means to say that underreporting of deaths by covid-19, he explains, is greater than 30%. “In many mild cases people didn’t even try to get tested. This underreporting that we were able to calculate is for serious cases and deaths.”

According to the researcher, underreporting was certainly higher in 2020, at the beginning of the pandemic, when there were no tests and many asymptomatic people did not even suspect they had the disease. “More recently, the proportion of underreporting is decreasing, which is a merit that we are making more diagnoses. And more timely diagnoses. What happens is that due to the natural progression of the disease, the virus has a phase of replicating in the nasopharynx and, therefore, with a simple exam, the Swab, we can detect. But then the virus goes to the tissues, and the detection of the viral agent becomes more difficult”, he says, emphasizing that the PCR test, for example, registers positive results if done between the 5th and 8th days of the disease.

“Always counting cases and deaths is important to develop and plan health policies. If we don’t know the number of serious cases, we cannot allocate hospital beds, [definir] how many are needed depending on the stage of the disease, how many ICU beds we need, [qual a] amount of oxygen we will need to avoid experiencing a Manaus crisis. Medicines, human and hospital resources are calculated from numbers”, emphasizes Ana Luiza Bierrenbach.

The realistic and “clean” disclosure of the numbers, she adds, is also crucial to raise awareness and alert the population. “We are really facing a very serious crisis. You still need to stay home. Between 2,500 and 3,000 people die a day in Brazil, and it has been good months that we have maintained these numbers.” Chile, cites the researcher, serves as a warning to Brazil that vaccination, if high, may not alleviate the tragedy.