# Covid19Hoy: thousands of French people once again demonstrate throughout the country against the health pass 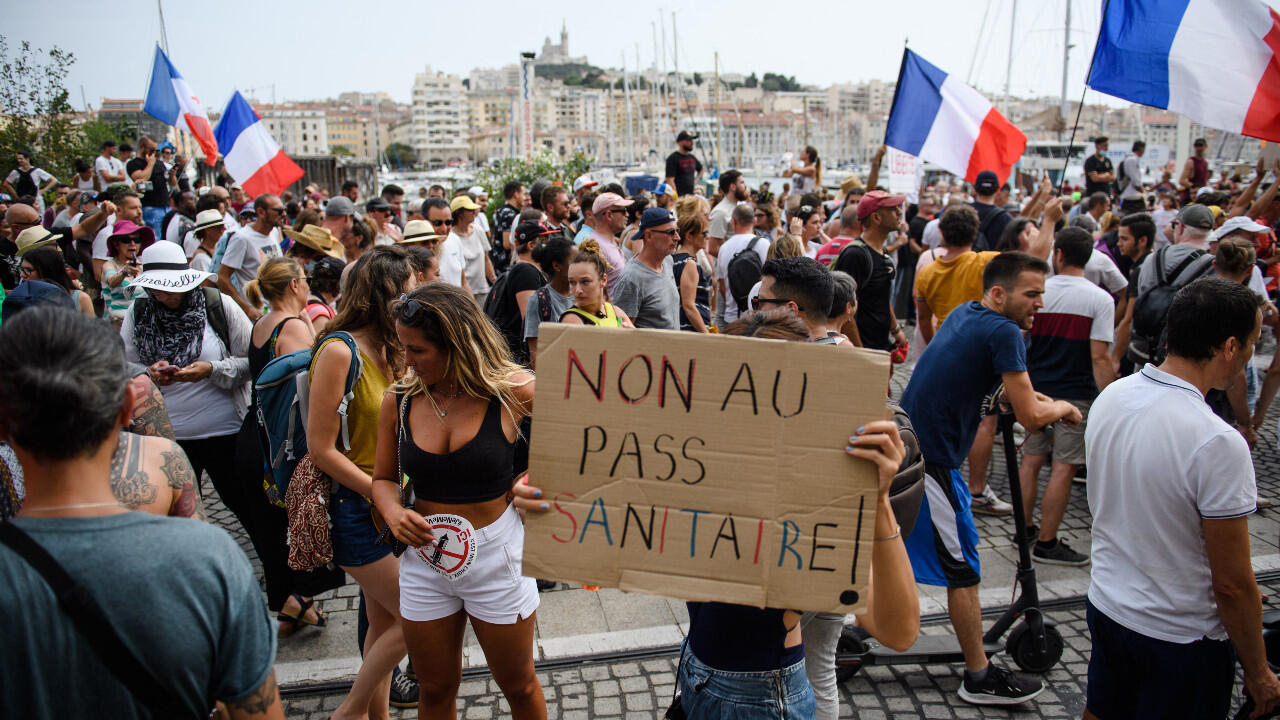 For the fourth weekend in a row, the streets of all France were filled again, with thousands of people opposed to the health pass that will come into force on August 9 at the initiative of the Government of Emmanuel Macron. Meanwhile, Spain extended restrictions on countries at high risk for the virus, while on the island of Cuba hospitalized increased. There the Government is implementing health intervention measures.

The fear of a new wave of coronavirus with a higher incidence of the Delta variant has led several countries to resume certain restrictions. In Europe, in the middle of the summer season, these measures are a hard blow for the tourism sector, which in countries such as France and Italy, are increased with the implementation of a health pass that will require being vaccinated or in possession of negative Covid tests for be able to enter certain interior spaces.

These measures have unleashed numerous demonstrations for attacking, according to citizens, their basic rights and involving discrimination for those not vaccinated, either out of fear or for refusing to receive the vaccine. The controversy is served, because, at the other extreme, there are those who also defend that it should be mandatory for the entire population.

Meanwhile, the world already adds more than 202 million cases of the disease, which has caused the death of more than 4.2 million infected. Against this background, more than 4.3 billion people have received vaccines, according to figures from the Johns Hopkins University.

Next, the most outstanding news of the pandemic, on this Saturday, August 7, 2021:

The legislature of Emmanuel Macron at the head of the Elysee has been marked by demonstrations. On this occasion, and for the fourth consecutive weekend, thousands of people protested against the health certificate to enter closed places such as bars or restaurants, as well as for the rest of the measures to stop the advance of the Delta variant in the country.

According to the French Interior Ministry, more than 200,000 people demonstrated across the nation against a measure that has the approval of the Constitutional Council and that will come into force next Monday, August 9. The health certificate that certifies being vaccinated or being negative for coronavirus has already existed since last July, but now it will be extended to bars, restaurants and numerous public places.

“Although I will have no other choice, I am going to boycott all the businesses that request it. I am a creator, I go to fairs and markets and there will be certain activities that I will not be able to do. It will be complicated on a financial level, but I agree to assume that risk “, explains to EFE Marie, participant in the Parisian protest.

What began as protests by denier citizens or anti-vaccines have become an amalgam of citizens of various kinds, including politicians and supporters of the extreme right. But also many citizens who see in the measure an attack on their fundamental rights.

“We are responsible citizens, absolutely committed to the defense of our fundamental rights and our freedoms. We are irreproachable, we are united and without political labels,” said Sophie Tissier, of the collective ‘Paris pour la Liberté’.

In Congress, the measure has also been opposed by the left, assumed by the La Francia Insumisa party. Meanwhile, Macron, who is on vacation, remains firm in his measures and relies on the fact that they have been constitutionally voted in Parliament.

Initially decreed for 15 days, the measure of the Government of Spain that forces to quarantine travelers from Argentina, Bolivia, Brazil, Colombia has been extended until next August 23. The measure is also extended to travelers from Namibia and South Africa.

According to this order, travelers from these countries must keep quarantine for 10 days once they enter the country, or seven days, if a week they provide an antigen test or PCR with a negative result. The measure affects high-risk countries, which is measured by the cumulative incidence per 100,000 inhabitants in fourteen days, the rate of positivity, that of diagnostic tests, or that of the vaccinated population.

In Colombia, this measure generated controversy because until now it has prevented Colombian nationals without Spanish nationality or justified kinship with a Spanish national from entering the European country, even when the person is fully vaccinated.

The Colombian ambassador in Madrid stated in previous days to a media outlet in the country, that the reason given in Spain for the measure is the high number of false Covid tests that had been detected. Many Colombians had arrived with negative tests and they resulted in positive tests taken upon arrival in Spain.

Cuba counted 8,893 new cases of the virus this Saturday and 93 new deaths in the last 24 hours. Meanwhile, the authorities reported an increase in hospitalizations for confirmed or suspected cases of Covid-19.

Havana, with 1,590 cases a day, and the central provinces of Cienfuegos (1,272) and Ciego de Ávila (1,087), currently present the most complex epidemiological situation, according to the Ministry of Public Health.

The Cuban authorities have launched a health intervention plan for the areas hardest hit by the virus. There they are using the already accepted Abdala vaccine, with an efficiency of 92.2% after its three doses. Also the vaccine candidate, Sovereign 02. So far, more than 4 million Cubans have received at least one dose of these formulas.

Protect your business from the dangers of hacking