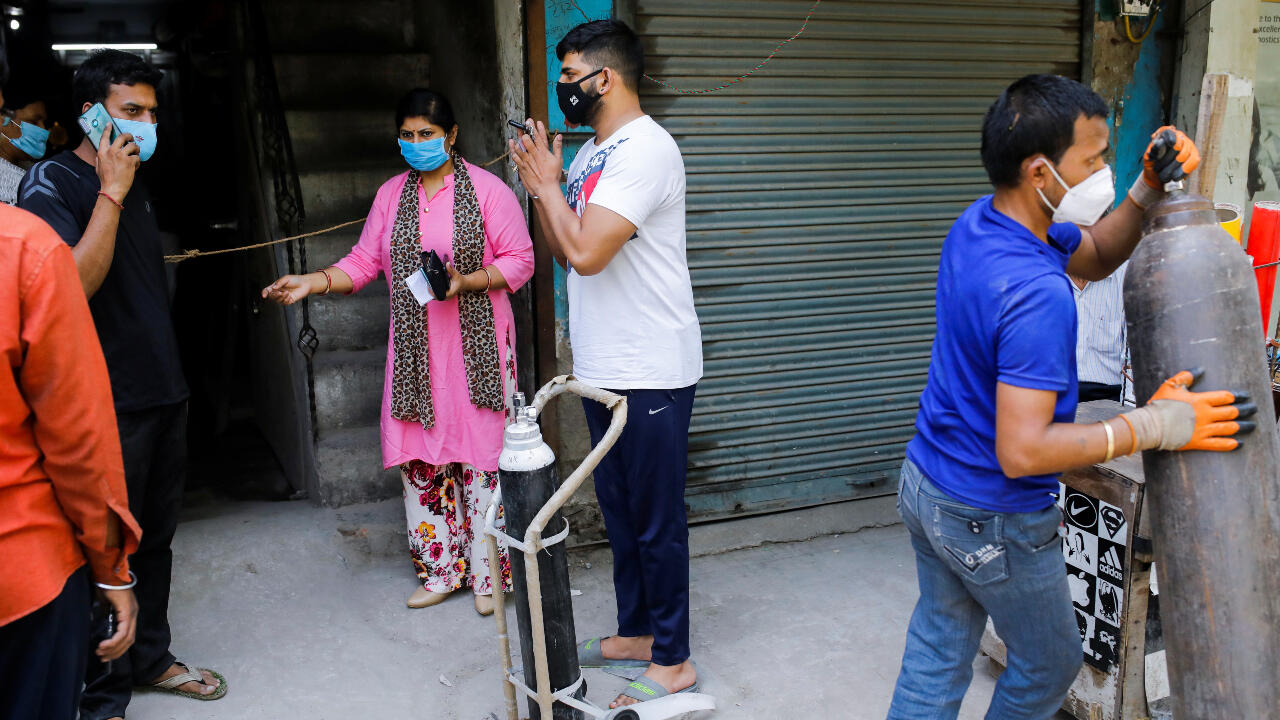 The quarantine in the Indian capital will last until next Monday, while intensive care beds and oxygen are in short supply. In other news, trips without quarantine began this Monday between New Zealand and Australia and in France they campaign for citizens to agree to apply the AstraZeneca vaccine due to the fear that aroused the finding of rare cases of thrombi in European patients inoculated with the medicine.

The health system of the Indian capital is overwhelmed and the daily infections of Covid-19 during the last week have approached 25,000 per day. This Monday, around 23,500 new infections were registered and hospital beds, as well as oxygen, are in short supply. New Delhi joins 13 other states in the country that have also imposed lockdowns or curfews to slow the spread of the virus.

The actions of the nation come as the country exceeds 15 million infections by the virus. In total, the world has registered 141.5 million cases of Covid-19 since the start of the pandemic. More than 3 million people have died from the virus and at least 80.8 have recovered.

Here are some of the most important news about the Covid-19 pandemic of this April 19:

At the start of this Monday, in the city with 20 million people there were around 113 intensive care beds of the 4,220 arranged to care for seriously ill patients with Covid-19. The health system in the capital of India is overwhelmed and in addition to the shortage of beds, oxygen cylinders are also lacking.

In recent days, the city has been around 25,000 cases a day and the country recorded a record 273,810 infections on Monday. India also just reported 1,619 deaths from the disease in the last day. In total, 178,769 people have died from Covid-19 in that country.

The confinement measure in New Delhi adds to similar decisions that have been made in 13 other states in the country, after months of criticism of Prime Minister Narendra Modi for his handling of the crisis. In recent months, in addition to multiple electoral events, in different parts of India crowds have been summoned to attend religious festivals.

British Prime Minister Boris Johnson canceled a scheduled trip to the country due to the aggravating situation.

This Monday, April 19, trips without quarantine from Australia to New Zealand were resumed for the first time in almost a year. Although several Australian states had already allowed the arrival of travelers from the neighboring country without requiring isolation, in New Zealand they had maintained the measure to prevent outbreaks.

New Zealand Prime Minister Jacinda Ardern said her Australian counterpart would visit the island “in the not too distant future.” “The bubble marks a significant step in New Zealand’s reconnection with the world and it is a step that we should take a moment to be very proud of,” the leader added to the press in Wellington.

However, despite the emotional scenes of family reunions that were broadcast on Monday in the local media, both the president and Australian Prime Minister Scott Morrison stressed that the measure would be under “constant review.”

Both alerted travelers to be prepared for abrupt changes in the event of a flare-up.

Loaded with flyers and patrolling areas near vaccination centers, volunteers from the French Civil Protection association try to persuade those over 55 to get vaccinated with the AstraZeneca doses. Workers from the Paris Mayor’s Office have joined the task in recent days.

Like other European countries, France faces the reluctance of its citizens to inject itself with this vaccine after some cases of blood clots occurred in people who had received the dose of the drug developed by the British laboratory of the hand in hand with the University of Oxford.

Faced with resistance, countries like Denmark suspended the use of this vaccine, but most European states are limiting it to older people. The European Medicines Agency noted that clots “appear” to be connected to the AstraZeneca vaccine, but noted that its benefits outweigh the risks.