# Covid19Hoy: Israel returns to the mandatory use of the mask 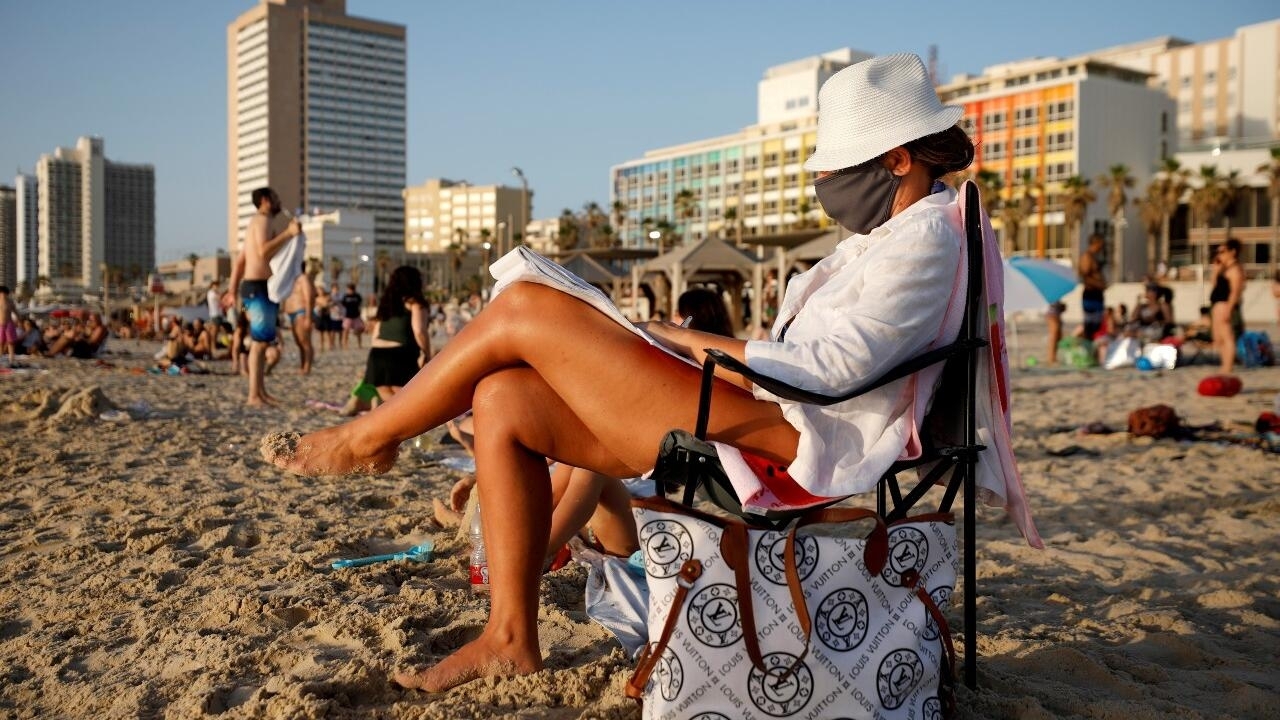 The Israelis were already beginning to feel the end of the pandemic, when the authorities announced that the use of a mask in the open air is again mandatory, due to the increase in infections. Meanwhile, Russia exceeded a maximum of daily deaths from Covid-19 this year and, in Spain, a series of student trips to Mallorca put several autonomous communities on health alert.

A successful vaccination campaign is not a sufficient guarantee that people will not continue to be infected with Covid-19. This was demonstrated by what is currently happening in Israel. After having managed to vaccinate, so far, more than half of its population of 9 million inhabitants, the growing increase in cases due to the Delta variant has forced the authorities to reimpose the mandatory use of a mask indoors.

In other countries, the arrival of summer has brought a false sense of security for many travelers and tourists who began to engage in leisure activities without protection. Consequently, mega-outbreaks have been registered, as happened in Spain during a series of student trips to the Balearic Islands.

This Friday, the Johns Hopkins University tracker reports that, in the world, 180,087,836 people have been infected; 3,902,331 have lost their lives and 2,801 million doses of vaccines have been administered.

Next, the most relevant news this Friday, June 25:

The increase in infections by Covid-19 has forced the authorities in Israel to restore the use of a mask in closed public spaces, after recently withdrawing its mandatory nature.

Exempt from the measure are minors under 7 years of age, disabled people, people who are alone in the closed place, employees who work in the same space and those who carry out a sporting activity outdoors.

Despite a vast and successful vaccination campaign, with more than half of the population inoculated against the coronavirus, health authorities have warned in recent days about the spread of the Delta variant of the virus, which appeared in India and is more contagious.

🇮🇱#Israel Masks have once again been required in schools in higher risk areas. Also places like airports and interiors. This is due to the increase in cases due to the Delta variant. Today they reported 120 cases, double that of the previous day and the highest number in two months. pic.twitter.com/rW0ljmEBnz


Since Monday, more than 100 new cases have been reported in Israel daily. As of Thursday there were 227, according to the latest government report. “We hope that vaccines will protect us from the increase in hospitalizations and serious cases,” said Nachman Ash, coordinator of the campaign against the coronavirus nationwide, in an interview with an Israeli radio station.

Ash added that he does not believe that the country is in a fourth wave of infections, but supported using the mask again due to the increase in the positivity rate.

In addition, Israeli Prime Minister Naftali Bennett postponed until August 1 the entry of tourists to the country, which was scheduled for July 1, and advanced the possibility of reimposing restrictions to contain infections.

Honduras will receive this Sunday, June 27, a total of 1.5 million doses of Moderna vaccines against Covid-19. This donation from the United States is part of the 80 million vaccines that US President Joe Biden has promised to give to the international community.

Honduras is the third Latin American country to receive them, after the US government donated three million doses of Johnson & Johnson’s vaccine to Brazil and 1.3 million of the same inoculation to Mexico last week.

The doses will reach the city of San Pedro Sula, through the Covax mechanism of the World Health Organization. It is the first time that the United States has distributed vaccines through this program, as previous donations have been delivered directly to countries.

In an interview for EFE, Juan González, director for the Americas at the White House National Security Council, assured that the donation is for the good of the world. “We share vaccines with Honduras because it is the right thing to do, from a global public health perspective, and the right thing to do for our collective safety and well-being in the region,” he resolved.

This tireless group of Argentine women, who have been searching for their missing grandchildren for more than 35 years during the military regime that ruled the country between 1976 and 1983, are making the new phase of vaccination against Covid-19 their new ally to find their families.

The objective is to take advantage of the fact that the age group that can access vaccination these days in Buenos Aires and other provinces of the country coincides with the age that those who were separated from their grandmothers during their childhood must currently be. Today they must be between 40 and 45 years old.

The Grandmothers of Plaza de Mayo launched a campaign on social networks aimed especially at those whose age corresponds to that band and who have doubts about their identity.

The president of the Abuelas de Plaza de Mayo association issued a statement inviting those born between 1975 and 1980 to participate in this campaign under the slogan “Vaccinate, save your life, if you have doubts about your identity, look for your truth.”

The campaign consists of publishing a photo on their social networks once they are vaccinated, or an image of their vaccination card, accompanied by the hashtag #UnaDosisDeIdentidad, tagging the official account of the organization @abuelasdifusion and adding the text

“If you are getting vaccinated these days, and you were born between 1975 and 1980, you could be one of the grandchildren we are looking for. If you have doubts, contact #Abuelas ”.

The last grandson who recovered his identity thanks to the work of the Playa de Mayo Grandmothers in Argentina was Javier Matías Darroux Mijalchuk in June 2019, who became the 130th grandson. beginning of the pandemic have made it difficult for grandmothers to work.

They hope to make up for the time lost during this stage of vaccination and thus find several more of those who were born in captivity or who were kidnapped along with their mothers during the dictatorship. The grandmothers estimate that there are still at least 400 grandchildren to be identified.

Colombia continues to report some of the highest numbers of deaths and infections from Covid-19 in the world. Both on Thursday and Friday, the coffee nation surpassed 32,000 daily confirmed cases in 24 hours.

In addition, the death toll from the virus also reported its historical maximum on June 24 with 698 deaths, while this Friday that number remained at 685 people killed by Covid-19.

In the midst of this difficult panorama, the Colombian government recommended the imposition of certain restrictions by local governments, including night curfews and shifts to make purchases according to the identity document number. This last measure is known in the country as ‘pico y cédula’.

At the same time, the nationwide vaccination campaign is advancing, whose current target audience is mainly those over 45 years of age. The total inoculated doses in the country is over 10.6 million. However, this includes both first and second doses. In total, 5.3 million people already have the complete vaccination scheme.

To speed up this process, this Friday health authorities authorized the use of the vaccine developed by Pfizer for children over 12 years of age. The National Institute for Food and Drug Surveillance INVIMA authorized the modification of the Health Authorization for Emergency Use that had been requested by the laboratory.

Our director @jaldanabula explains what the modification of ASUE for the vaccine against # Covid_19 from the pharmaceutical company Pfizer – BioNTech, in order to update the age group for people over 12 years of age to receive this vaccine. pic.twitter.com/Gnh0Gk7UMG


The Colombian entity also authorized the use of Moderna’s vaccine, developed in the United States. The drug may be administered to people over 18 years of age in a two-dose schedule with an interval of 28 days between each one.

In this way, it is expected to increase the amount of doses available in this country, one of the most affected by the Covid-19 pandemic in Latin America.

Russian authorities reported that the country registered 601 deaths from coronavirus in the last 24 hours, the highest number of deaths from this disease so far this year.

In addition, in the 85 regions that make up Russia, 20,393 new infections were detected this Friday, of which 3,120 were asymptomatic.

The situation is not improving either in Moscow, the capital and epicenter of the pandemic, where in just one day the number of deaths rose to 98, the highest since the pandemic began in March 2020.

The mayor of Moscow, Sergei Sobianian, said that the city is “practically at a peak of infections, compared to the previous wave.”

In Moscow, vaccination was decreed mandatory for at least 60% of employees in the service sector, and as of June 28, gastronomic establishments will only serve vaccinated people.

The Community of Madrid reported this Friday that at least 2,000 students from various academic institutes are isolated, after a Covid-19 mega outbreak reached students from six autonomous communities in a series of trips to the island of Mallorca, made to celebrate the end of the course.

Student trips so far leave 394 young people infected from various autonomies, including the Valencian Community, Madrid, the Basque Country, Murcia and Aragon. According to local media, Galicia is also studying cases associated with a trip to Mallorca.

The people who tested positive for coronavirus are between 17 and 19 years old and were staying in eight hotels in Mallorca between June 12 and 20. Most of them are asymptomatic or have mild symptoms, and so far there are none hospitalized.

The discos in the Balearic Islands are closed, however, the cafes and bars are open until 2 in the morning. Although it is not allowed to dance indoors or outdoors, videos of parties in Mallorca and large crowds of students without masks circulate on social media.