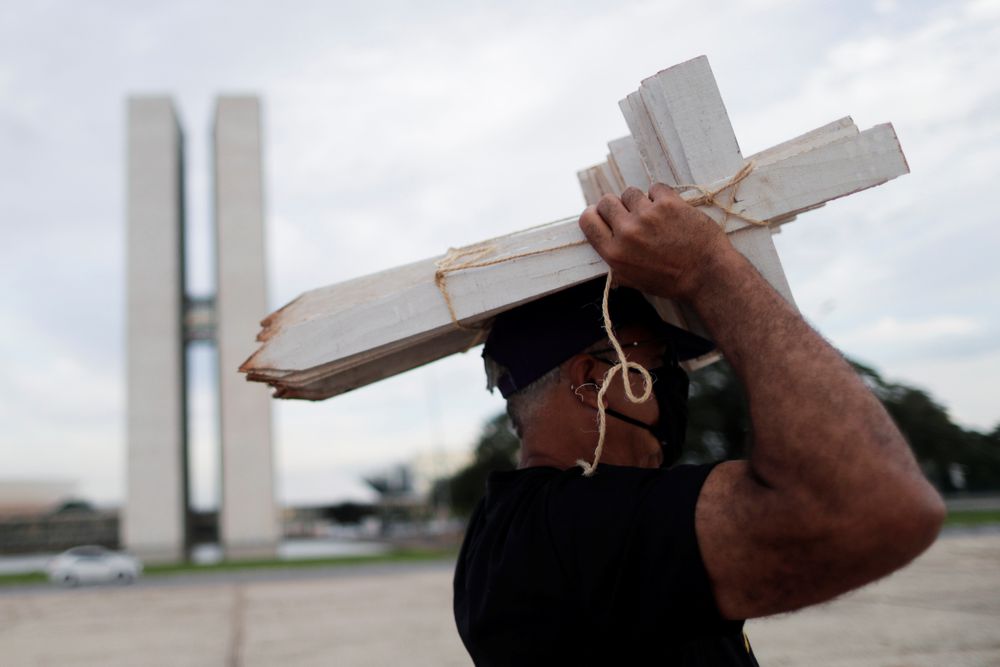 In a period of three hours, last Thursday, the Medical Department of the Chamber of Deputies received 20 certificates from employees requesting leave to treat covid-19. The day before, there had been almost 60, according to the vice president of the Legislative Branch Officials Union, Paulo Cezar Alves. Since March 2020 and until last week, the Chamber had registered at least 21 employee deaths and 482 infections. The numbers give an idea of ​​the wave that sweeps Brazil and of which, on Thursday, Senator Sergio Olimpio Gomes (Social Liberal Party PSL-SP) was a victim. Mayor Olimpio, who first supported President Jair Bolsonaro and then broke with the Government. This crisis is hitting the administrations of Brasilia with intensity, which, in large part, have decided to resume face-to-face or blended work.

Senators have shown their outrage at what they consider to be the ineptitude of the Jair Bolsonaro government in managing the pandemic. After the death of Olimpio, they have begun to articulate to define protest actions, which began with the dissemination of a video on their social networks in which Olimpio himself asked to be vaccinated. There is a climate of indignation and consternation among the majority of the parliamentarians, but it seems that they only realized the debacle now, with the death of the third senator – José Maranhão and Arolde Oliveira preceded him – and when the country approaches the 300,000 dead, while the president persists in denialism: he has doubted the collapse of health in the States, with saturated ICUs, and said that he will appeal to the Supreme Court against confinements.

The cases of the civil servants, however, accumulate without receiving the media attention that is dedicated to their bosses. Many are forced to return to their jobs day after day, because, in the case of contract workers, they fear losing benefits, such as food subsidies or, worse, their own jobs, so they end up converting. in pandemic numbers. Many times, not even that, since 18 of the 23 ministries of the Government of Jair Bolsonaro, in addition to the Federal Senate, have refused to respond to this newspaper’s questionnaire on the number of infections and deaths from coronavirus in the last 12 months. In practice, the victims are listed in the accounts of the Federal District Health Secretariat, but hardly anyone knows who they are. In the capital of Brazil, 5,274 people have died from this disease and 324,576 have been infected.

Of the five ministries that responded, totally or partially, to the questions from EL PAÍS, added to the data sent by the Chamber, it can be said that at least 91 officials have lost their lives due to this disease, and 4,319 have been infected.

The three senators who died from the virus ―Olimpio, José Maranhão and Arolde Oliveira― and the Army sergeant Silvio Kammers, an adviser to President Jair Bolsonaro whose name had been omitted by the Planalto Palace until last Wednesday, do not enter the calculation. when the Brazilian press reported the case.

Among the five ministries that responded to the questions, the one that registered the most deaths was the Economy (49), followed by the Agriculture (19), and the Justice (2). The Ministry of Health reported only 333 infected, but not the number of deaths. And the Office of the Comptroller General of the Union (CGU) reported that no fatalities had been registered. In the other 18 ministries, no accounting was provided. In the case of the Office of Institutional Security, the answer was that the reporter had to use the Access to Information Law to obtain the data. Due to the current deadlines, the response could take up to a month.

In the Chamber, one of the fatalities was the head of the internal control secretariat, Creuzi Rodrigues da Silva, 60 years old. She, her husband and her son were infected, but hers was the most serious case. His relatives searched for a bed for him in the ICU for three days, and they got one on March 8, but Rodrigues da Silva died the next day. He had worked in the Legislature for 29 years. She was teleworking until January, but was forced to go to the National Congress in February, when Arthur Lira (Progressive Party PPP-AL) assumed the presidency of the Chamber and decided to return to face-to-face work. Lira’s inauguration was celebrated with a party in which the guests did not wear masks.

Last Thursday, Lira backed down and decided to restrict the movement of parliamentarians and employees for the next two weeks. Journalists featured in the Chamber were instructed to suspend live broadcasts after one of them was infected. The deputy felt pressured by the majority of the parliamentarians, as well as, indirectly, by Rodrigo Pacheco, president of the Senate, who called for a “national pact” to combat the pandemic. “We need more than ever a national union, a national pact against this disease. The sadness that we are suffering, with people close to us, is the sadness that thousands of people in Brazil suffer, and it is necessary for the political class to do something, ”Pacheco said in a television interview. Pacheco is holding a request to form a parliamentary commission to investigate the management of Jair Bolsonaro. Until now, however, he prefers to use it only as an instrument of political pressure.