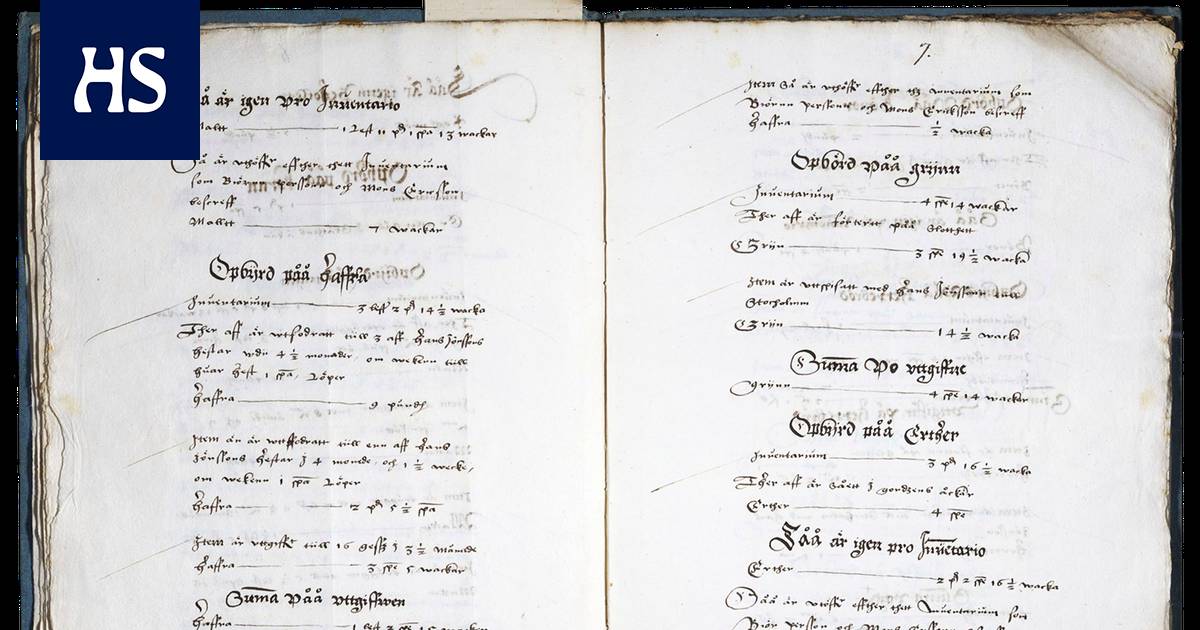 Without King Gustav Vaasa and 16th-century voudin accounts, we would know little about the lives of medieval Finns.

Helsinki Messages said recently that the State Audit Office got its start Gustav of Vaasa during the 16th century.

Assistant Professor of Finnish and Nordic History Anu Lahtinen commented on the story on Twitter, saying that a wealth of interesting minutes of the early audits and subsequent lawsuits have survived.

They are a barren read – and a treasure trove of historical research.

1550s In the middle of the 19th century, King Gustav Vaasa stayed in Finland for a long time. One of the purposes of the trip was to increase the efficiency of tax collection in the Kingdom of Sweden.

The people had been squabbling about the heavy tax burden for a long time, and now, for the first time, it was possible to find out how much taxes were collected from the people – and what part of them ended up in King Stockholm.

The system was revealed to be permeable.

Taxes were levied at that time by collecting food and raw materials from the people: rye, barley, oats, malt, fat, butter, hops, hemp, feathers, or fish.

The tax was levied by vouds who, in the absence of supervision, had lived like pigs in a field. But now they got caught!

For example, there were scam measures in use: the people collected grain in two liters, but only one liter was delivered to Stockholm for the king. Vouti and the scribe betrayed the rest to themselves.

Lahtinen specifies that the dimensions are only examples. The definition of a liter did not even exist at the time, but the standard was not created until the late 18th century.

The dimensions were named after the localities: there was, for example, the Vyborg dimension and the Stockholm dimension from there to the king.

In Porvoo, a very rancid vouti was caught. This is where the saying came from By the measure of Porvoo.

Theft were substantial. According to Lahtinen, in one case, Vouti had embezzled goods worth FIM 600 at the time.

“It’s an incomprehensible amount, at that time it would have got a big mansion,” Lahtinen says.

He thinks embezzlement was downright a country habit. Immediately after the first large-scale inspection, a lot of vouts were caught.

Trials were held in Turku Castle, in which the voudis were held accountable for their actions. Lahtinen translates a protocol written in medieval Sweden:

“Unbelievably, unjustly and falsely seized these supplies from the Royal Majesty and hid them like thieves. That is why they must be put on a noose unless the king graciously protects their lives. ”

“God knows how this has happened here. I never imagined the measure would be that big. I never knew the difference between the Stockholm measure and the measure used. ”

Porvoo vouti was sentenced to death, but his fate is uncertain. Sometimes bribes helped.

According to Lahtinen, the lawsuits were a sign of a strengthening state and tightening control. For the people, accurate accounting ultimately meant tightening the tax screw but also a certain protection against local arbitrariness.

“It cannot be said that after this order and peace prevailed, but as a kind of fright, the inspection acted.”

Presently is going project, where vaudo accounts from the time of Vaasa are digitized. There are half a million pages.

According to Laitinen, a unique history has been stored in voudint accounts. They contain letters, judgments, payrolls, visitor lists for Turku Castle, information about executions and land ownership, or stories of how a cow took cows from the island.

“They exist thanks to Kustaa Vaasa. Without them, we would not have terribly information about the lives, everyday life and even the Finnish villages and locality of the 16th century. ”

An ambulance was embedded in a place in Recoleta