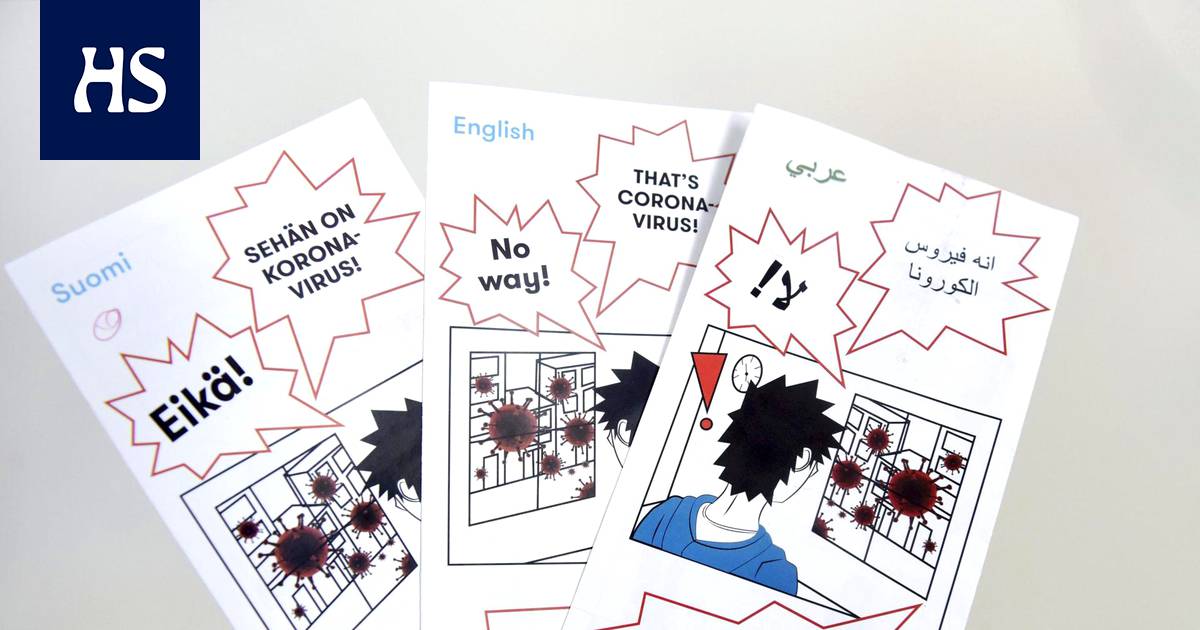 Structural reasons make people with a foreign background susceptible to infections. The aim is to alleviate the situation by disseminating information in many languages.

Foreign backgrounds the proportion of coronavirus infections in the metropolitan area has been high for a long time, but has increased further in the last couple of weeks. There are many reasons behind this, some of which are structural.

In the Helsinki and Uusimaa hospital districts (Hus), the proportion of foreign-language, ie non-Finnish and Swedish-speaking, coronary infections has been about a third since the autumn, says Hus’s chief infectious disease doctor. Asko Järvinen. Over the past week, it has risen to 40-50% based on sampling.

“It might seem that the infections of the native population are leveling off a little faster than those of foreign speakers. There, the rise has continued to be stronger than in the Finnish and Swedish speakers, ”says Järvinen.

In Helsinki, the share of foreign-language infections rose to 39 per cent last week, and in Vantaa it has been 45–50 per cent in the first half of the year. In Helsinki, foreign speakers account for about 16.5 per cent of the total population and in Vantaa for about 21 per cent, so people with a foreign background are over-represented in infections.

Järvinen recalls that over-representation is not quite as strong as it suddenly seems. Infections have been detected during the current wave of the pandemic, especially in the much younger generations, ie those under the age of 50, and there are relatively more migrants in these age groups than in the elderly, who are well protected and now have relatively fewer infections.

According to him, the age structure of foreign speakers may also contribute to the fact that the virus is not considered so dangerous, because due to the lower risk at the individual level, even younger age groups in the native population also have a slower attitude towards the pandemic.

Hus has not statistics on hospitalized corona patients by mother tongue, but Järvinen estimates that there are relatively fewer foreigners in hospital than in infected ones.

“Our foreign speakers are, on average, a younger age group, and people have to go to the hospital a little older,” Järvinen says.

“But I know we’ve had younger people with an immigrant background in intensive care and in severe pain. Yes, they also take more blows in this way through serious diseases. ”

Foreign language for the relatively higher number of infections, there are several background factors in addition to the age structure. Mayor of Vantaa, the city with the highest incidence rate in Finland at the moment Ritva Viljanen notes that many of the reasons are structural.

“Many are in occupations where telecommuting is not possible, and many may live in cramped conditions. We have a lot of international labor from abroad, and large clusters of infections have been noticed in Vantaa, for example on construction sites, ”says Viljanen.

Husin Järvinen points out that the same phenomenon has been observed not only in Finland but also in all other large Nordic cities. Not only those with an immigrant background stand out in the infection statistics, but those belonging to the lower social classes in general. These groups combine occupations that are more prone to infections and more cramped housing.

Certain groups of immigrants may also have more social contacts than the native population due to community culture.

Viljanen reminds that some foreign language groups have a larger family size than average.

According to Järvinen, the British variant of the virus, which passes more easily through family circles, may also have had its own effect.

“It felt like with the previous virus, maybe half of the family got sick and now it feels like the bigger part, if not almost everyone in the family gets sick. Then, of course, it is also emphasized ”if there are large families.

Authorities in the metropolitan area have long sought to take measures to curb the spread of the virus among foreign speakers. It is difficult to influence structural reasons, but active efforts have been made to disseminate information in both Helsinki and Vantaa.

In Vantaa, for example, there is a “corona pack” where counseling is distributed in several dozen languages.

“We have a coron bot on our website that translates counseling into over a hundred languages. Through the children, multilingual counseling videos made by mother tongue teachers were also distributed at home, ”says Mayor Viljanen.

He has met several times with representatives of immigrant organizations and religious communities. According to him, the meetings have taken place in a very good spirit of cooperation.

“We have provided information and asked them for help with this situation and for their part to provide advice.”

Free masks have also been distributed to immigrant communities through organizations and religious communities.

The most recent action in Vantaa was the opening of a new testing point in Hakunila, one of Vantaa’s most immigrant-intensive suburbs.

“There is no need to take a bus to the surrounding areas,” but a test site can be found within walking distance.

There is an order for sharing information and the proximity of testing sites, as according to Järvinen, the proportion of positive test results in the Hus area is slightly higher among foreign-speakers than among the native population. It suggests that infections from foreign backgrounds go undetected.

According to Järvinen, the language barrier can in some cases make it more difficult for immigrants to apply for corona tests.

Turbulence in the Bundesliga: Schalke threatens to break on the subject of Rangnick