Coronavirus Those who received one vaccination would avoid two tests, from “green” countries to Finland – Social Affairs and Health Committee proposes mitigations to the government’s entry model 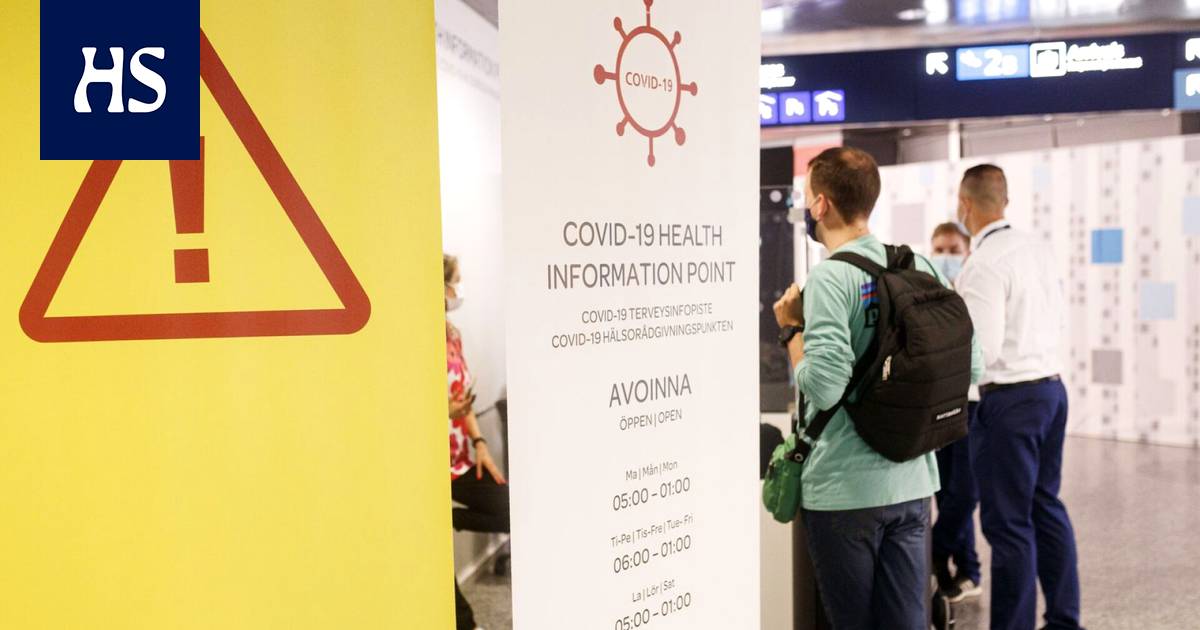 The Parliamentary Committee on Social Affairs and Health completed its report on Monday on the government’s entry model. The Social Democrats in the committee did not support the mitigation.

Parliamentary the Social Affairs and Health Committee, in its report completed on Monday, is giving the green light to the government’s entry model.

However, the committee is proposing changes to the model.

Among other things, it considers that passengers who have received one coronary vaccination should not be required to have two coronavirus tests upon arrival in Finland. Instead, one test would suffice, says the chairman of the committee Markus Lohi (middle).

In a government proposal Passengers who have received one vaccination would be required to have both a preliminary test, a certificate of which would be presented upon entry, and a second test in Finland within 3–5 days. The Committee on Social Affairs and Health considers that a preliminary test would not be necessary and that the test taken in Finland would be sufficient.

THE BOARD OF DIRECTORS the proposal is a temporary amendment to the Communicable Diseases Act.

The aim of the law is to reduce coronary infections spreading to Finland through cross-border traffic and to prevent the spread of new viral variants to Finland as tourism gradually opens up.

In the government’s proposal, the law would be in force by the end of the year and the requirement for a second test by mid-October.

The Committee on Social Affairs and Health shortened the validity of the law to mid-October. this was condition of the Committee on Constitutional Affairs that the law may be enacted in the order in which the ordinary law is enacted.

The Committee on Constitutional Affairs gave its opinion on the bill last week. It also drew attention to the fact that the level of risk in countries of origin should be taken into account in law. In the government’s proposal, the requirements are the same at the border, regardless of which country the passenger comes from.

The Committee on Social Affairs and Health also made this change. It believes that the so-called green countries could enter Finland freely.

“We started from the premise that the regulation stipulates that those countries that are so-called green countries […] would be free to come here. We could focus resources on those that are at risk, ”says Lohi.

Green countries are referred to countries with a maximum incidence of 25 cases per 100,000 inhabitants per 14 days.

“We saw that if there are no medical grounds to strictly regulate in this way, then we need to think about the overall situation of society and also that society and tourism can be opened up in a safe way as vaccination programs progress,” Lohi says.

The report the content was voted on. The Social Democrats in the committee supported the government’s original proposal and would have failed to make any mitigations. Only the period of validity would have been shortened as required by the Committee on Constitutional Affairs.

Member of the committee Who is Linden (sd) says that in the Social Democrats, mitigation was seen as a risk.

“We didn’t support the point where, unlike the government’s original proposal, we went to rank different countries. That means that those countries can come to Finland without any tests and without any vaccines. ”

Lindén is particularly concerned that these countries, despite their low incidence, could spread to Finland the so-called delta variant of the virus, which is highly contagious.

Exempting those who have received one vaccine from the pre-test is also a bad idea, according to Lindén.

“It can practically mean a situation where people walk on the ground and they can still have an infection on the ground after they have only received the first vaccination,” he says.

Government According to the model presented by those arriving in Finland, a reliable certificate of coronavirus disease, an acceptable coronary vaccination series or a negative corona test performed prior to arrival in Finland would be required upon entry into Finland.

If there is no certificate for any of these, the passenger should take the corona test as soon as they arrive in Finland.

The pre-entry test should have been performed no more than three days before arrival in Finland.

If the passenger has not received a full series of vaccinations or suffered from coronary heart disease, he or she should also take another test in Finland within 3–5 days.

The obligation to present a certificate or take a test would apply to those over 16 years of age.

Failure to participate in the tests could result in a fine.

There is no actual requirement in the law for voluntary quarantine between tests, but close contacts are instructed to be avoided. This is in line with THL’s current recommendation.

The law is to be discussed in Parliament before the summer recess, ie this week.

It has taken a long time to create a model for presenting corona test results at borders and the process has been difficult.

Last fall, the government attempted to create a model did not passt as such is screened by the Committee on Constitutional Affairs.