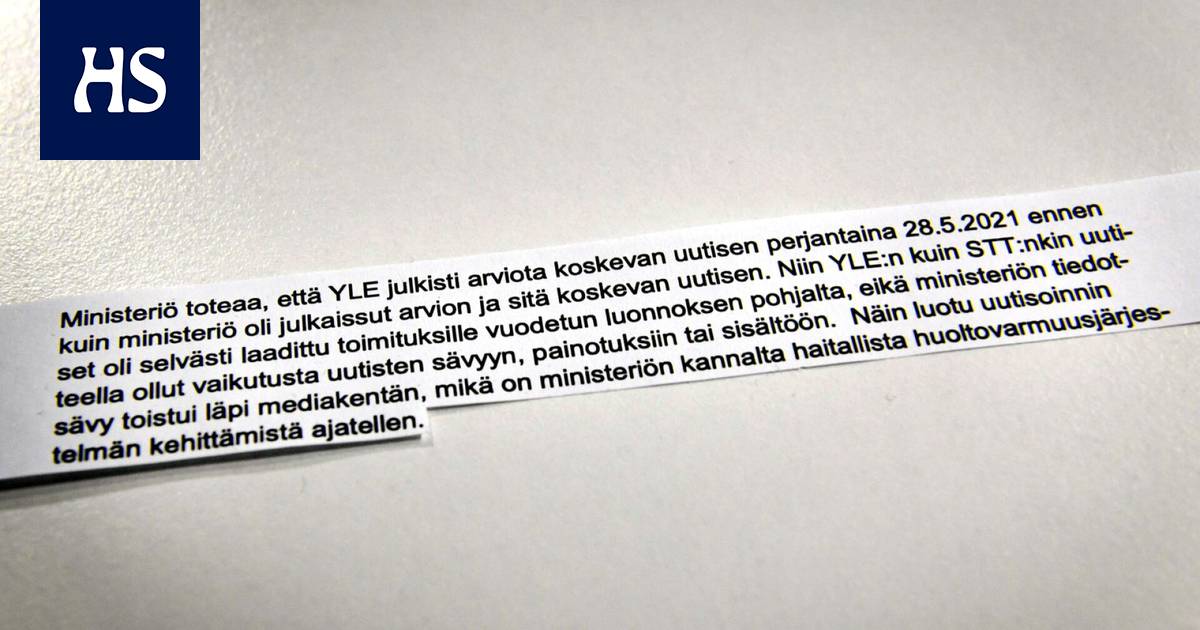 The Ministry of Employment and the Economy acknowledged that the media had read the report in advance. According to the ministry, this caused the news coverage to focus on negative findings rather than a message from the ministry bulletin. The views are reflected in the exchange of messages that BTI received from the Ministry with a request for information.

Job- and the Ministry of Economic Affairs (MEE) wanted to influence how the evaluation of the Security of Supply Center (IGC) was reported last spring. The Ministry was disappointed that the news focused on critical findings about the security of Finland’s security of supply, ministries and the IGC.

“Both YLE’s and STT’s news were clearly prepared for the editorial staff on the basis of the draft, and the Ministry’s press release had no effect on the tone, emphasis or content of the news. The tone of the news thus created was repeated throughout the media field, which is detrimental to the Ministry in terms of developing a security of supply system, ”the Director General of the Ministry Antti Neimalan a letter sent by Laurea University of Applied Sciences to the rector in June states.

This week, BTI asked Neimala about the ministry’s reaction. He denied that his effort had been to influence the tone of the coverage.

“The tone of the news is chosen by all media completely independently, but a piece of the first news was missing, ie our own press release,” says Neimala.

TEM had decided to acquire an independent evaluation initially in the summer of 2020, following the failure of the Security Supply Centre’s failed mask acquisitions to result in a public resignation and the resignation of the CEO of the IGC. The Ministry of Employment and the Economy is responsible for directing the Security of Supply Center.

The report was commissioned from a research consortium that included the University of Vaasa and Laurea University of Applied Sciences. The evaluation was completed in the spring of 2021.

While the evaluation was still awaiting publication, STT and Yle received the final layout of the text from the research consortium, not the unfinished draft. The condition was that the matter would not be reported until the ministry had published the report. For example, it is standard practice for ministries to make reports available to the media in advance so that journalists can prepare for news coverage.

STT asked the Security of Supply Center for an interview in the spring, when the ministry was informed that the content of the report was already known to journalists. Yle, for its part, ended up publishing the story early on the same day the ministry was due to report on the report. Immediately after Yle, BTI also published its news, as the findings of the report had already been made public.

The ministry said that the report had been read to the media in advance. According to the ministry, this caused the news coverage to focus on the report’s negative findings and not on the ministry’s own press release message. The views are reflected in the exchange of messages that BTI received from the Ministry with a request for information.

The Ministry of Employment and the Economy requested an explanation from Laurea University of Applied Sciences, which participated in the preparation of the assessment, and considered that the price of the ordered assessment should be negotiated. Laurea reduced the price of the study by 10,000 euros after a discussion with the ministry.

In the news based on the report, it was pointed out, among other things, that the organization of preparedness activities in the ministries seems to be poorly managed, legislation and the division of responsibilities were seen as confusing, and the Ministry of Employment and the Economy was criticized for cooperating with other ministries. In the Ministry’s press release, the results of the evaluation report were summarized more positively.

“Finland’s security of supply system is estimated to be productive, flexible and agile, but due to changes in the operating environment, regulations, structures and processes need to be reformed. According to a stakeholder survey conducted in support of the assessment work, the actors involved in the security of supply work see the system working very well, ”the press release read.

See also  Minister must give way to lower interest rates

According to Neimala, it is the journalist’s “own interpretation” that the tone of the bulletin was softer than that of the report.

For example, Neimala had discussed the procurement of shelters with the then CEO of the IGC Tomi Louneman with the spring of 2020. He was thus involved in the process, the shortcomings of which the report addressed, among other things.

According to Neimala, it is normal for information to be prepared in the same department. According to him, it is up to the ministry to take care of the news based on the evaluation it receives.

“Our role was to prepare the information for us, which is quite a normal and natural order,” he tells STT.

Neimala denies that the Ministry made any attempt to conceal criticism of the department. According to Neimala, one problem with leaks in general is that they treat the media “unequally.”

“We wanted to get that information out to all the media at the same time to be evaluated in the same way.”

How did reporting the issues raised in the report in advance be detrimental to the development of security of supply activities, as you formulated in your email?

“When such an assessment is made, it is important that it can be assessed in the most appropriate way for the subscriber and communicated to everyone at the same time. It does not contribute to the further preparation or alignment of the issue of leakage. ”

What did you not like about the tone of the news?

“I won’t go into detail here. It was a matter for the whole chain of operations and the mandate given, and what kind of loyalty can be expected from its consortium and its members. ”

Neimalan according to the Minister of Labor Tuula Haatainen (sd) was aware of the plans for disclosure.

“When it comes to making a case public, of course, the minister is involved in preparing to make the case public about how it will be implemented. This is how the ministry works together with our communications, ”says Neimala.

“That claim for compensation was not a claim, but we asked how the reporter of the report would react to it [vuotoon]. It was considered reasonable to consider the matter. The amount of the rebate was offered from the supplier, ”he says.

Haatainen, through his assistant, replied that he had received a normal summary of the content and plans for publishing the report before it was published. However, the preparation and implementation was done by an official, which is why Haatainen did not comment further.

TEMin According to its own communication guidelines, the values ​​that guide the ministry’s communication include transparency and reliability. The guide states that open communication on difficult issues also increases trust.

“Public authorities have a duty to produce and share information so that citizens and other stakeholders can have a true picture of how the authority operates, influence what is going on, and monitor their interests and rights,” the guide says.

According to Neimala, the goal of the ministry is to be able to inform about things itself.

“It was a way of a press conference or a bulletin or someone else, but we’re not trying to influence the tone of the news in a way that guides them.” Daniela Castro locks herself up after getting COVID-19: “I’m omicrona!”