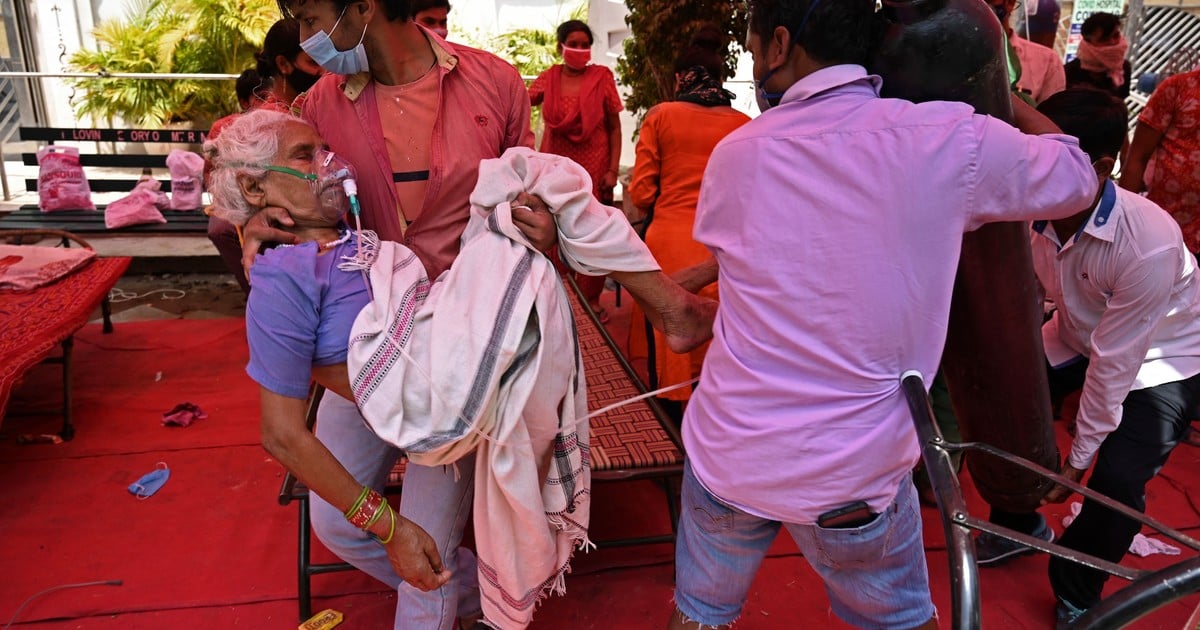 Infections and deaths from Covid-19 are increasing with alarming speed in India, with no end to the crisis in sight and with the warning from a high-level expert that the next few weeks in the country, with almost 1.4 billion population, they will be “horrible”.

On Tuesday, India’s official coronavirus case count surpassed 20 million, and nearly doubled in the past three months, while deaths have officially passed 220,000. As staggering as these figures are, it is believed that the true they are much higher, since the count is an apparent reflection of the problems of the health system.

The country has seen scenes of people dying outside overflowing hospitals and funeral pyres lighting up the night sky.

Infections soared in India since February, in a disastrous turn which is attributed to the most contagious variants of the virus, as well as government decisions to allow them to gather crowds at Hindu religious festivals and at political rallies before state elections.

Last month, India’s chief health officer, Rajesh Bhushan, refused to speculate why the authorities were not better prepared. But the cost is clear: the population is dying due to the shortage of oxygen and hospital beds, or because they could not be tested for Covid.

Family members mourn the loss of a loved one due to covid. Photo: AFP

In the best case…

Dr. Ashish Jha, dean of the School of Public Health at Brown University in the United States, said he is concerned that the Indian policy makers with whom he has been in contact believe that things will get better in the coming days.

“I’ve been trying to tell you: ‘If everything goes very well, things will be horrible for the next few weeks. And it may be for much longer‘”, He said.

“That’s what this wave is going to break,” he said.

The numbers of deaths and infections are considered unreliable because the tests are irregular and the reports are incomplete. For example, government guidelines ask Indian states to include suspected Covid-19 cases when recording deaths from the outbreak, but many do not.

The United States, with a quarter of the population of India, has recorded more than two and a half times the number of deaths, about 580,000.

People line up to get tested at a hospital in Siliguri. Photo: AFP

Municipal records last Sunday show that 1,680 dead in the Indian capital were treated according to the procedures for the delivery of the bodies of those infected with Covid-19. However, in the same 24-hour period, only 407 deaths were added to New Delhi’s official number.

The High Court of New Delhi announced that it will begin to sanction government officials if they do not turn themselves in. oxygen supplies assigned to hospitals. “Enough is enough,” he said.

The deaths reflect the fragility of the healthcare system in India, a nuclear power and vaccine capital of the world. The party of Prime Minister Narendra Modi has countered the criticism, pointing out that the lack of financing of health it is chronic.

Burial of a covid victim, in New Delhi. Photo: AP

But this is all the more reason for authorities to take advantage of the several months in which cases in India have declined to prop up the system, said Dr Vineeta Bal of the Indian Institute of Education and Scientific Research.

“Only a patch-based enhancement would have been possible,” he said. But the country “He didn’t even do that.”

Now the authorities are struggling to make up for lost time. Hospital beds are being added, more testing is being carried out, oxygen is being sent from one corner of the country to another, and the manufacture of the few effective drugs against Covid.

The challenges are greatest in the states where elections were held and the crowds without masks, probably worsened the spread of the virus. The average number of daily infections in the state of West Bengal has multiplied by 32 to more than 17,000 since the voting began.

“It is a terrifying crisis“said Dr Punyabrata Goon, convenor of the West Bengal Physicians Forum.

A woman with covid loses consciousness in a Sikh temple. Photo: AFP

Goon added that the state also needs to speed up vaccinations. But the world’s largest vaccine manufacturer has a shortage of vaccines, as a result of delays in manufacturing and shortage of raw materials.

Experts also fear that vaccine prices will make it difficult to vaccinate the poorest. On Monday, opposition parties urged the government that vaccines are free for all Indians.

India is vaccinating about 2.1 million people a day, or about 0.15% of its population.

“This is not going to end very soon,” said Dr. Ravi Gupta, a virus expert at the University of Cambridge in England. “And really … the soul of the country is in danger, in a way. “

How to Squash a Locust Plague with New Technology