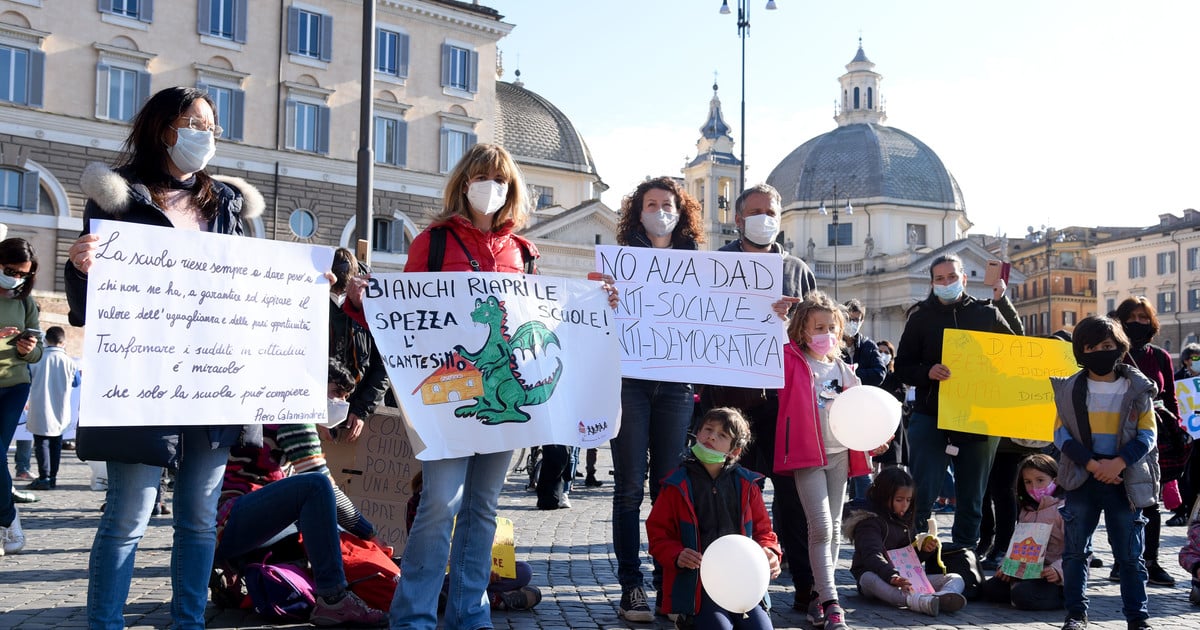 Almost seven million students from Italy will return to face-to-face lessons on April 19, pending the completion of the initiative “all to class” on April 26.

The end of distance education, modality in force due to the coronavirus pandemic, was the main commitment assumed by the government of Italian Prime Minister Mario Draghi after his inauguration.

It is about of 6,850,000 students out of the 8.5 million total between state and joint schools (without state or private management but that adhere to the teaching programs of the Ministry of Education), reported Tuttoscuola, the online site of the Italian educational community.

There are 291,000 more this week, all from the Campania region, south-west of the country, who left the red zone. The regions of Puglia, Sardinia (both in the south) and Valle d’Aosta (northwest) remain in a state of maximum rigor, with 390,000 students taking classes virtually.

In Naples, a march in early April to open schools. Photo EFE

Total, There will still be almost 1,657,000 children under the distance education modality next week On the other hand, as of April 26, in the “yellow” and “orange” areas all schools will open for face-to-face classes.

In the “red” areas, where the spread of Covid-19 is still raging, the lessons will take place in class up to the eighth grade of primary school (now it is up to first grade), while in secondary schools the activity will be developed by at least 50% in person.

Is about a true turning point If you think that, since March 2020, shortly before the total national confinement, the institutions did not offer face-to-face classes with all of their students.

Next week, with 80.5% of the students present, it will return to February levels, when about 7 million were in the classrooms.

In the 18 autonomous regions and provinces that are in the “orange zone” the percentage of face-to-face students ranges between 81% and 86%, while in the three cataloged as a “red zone” it reaches 51%.

The table on the territory becomes more homogeneous, according to data from Tuttoscuola: face-to-face students reach 84% in the north of the country; 83% in the center; 76% in the islands (with a decrease due to Sardinia) and 74% in the southern regions.

For their part, the autonomous provinces of Bolzano and Trento confirmed the most high percentage of face-to-face students (87%).

The problems related to the new return to school are the same as always: local public transport and infection detection.

To strengthen transport, the minister of the sector, Enrico Giovannini, met on Saturday with the local authorities and scheduled a new appointment for next week, which caused a bit of surprise in three municipalities and provinces due to the acceleration of the government in the total reopening of schools, as of April 26.

Draghi recalled that 390 million euros were allocated to improve transport.

For the traceability of contagions, on the other hand, the hypothesis of the salivary swabs for children and the antigenics for the students you like, at random, in schools, since it is impossible for cost and logistics reasons to carry them out in a total way.

It is expected that with educational personnel vaccinated with the first dose, more than 73% of those older than 70 years and more than 50% with at least one dose, the youngest are no longer a dangerous vehicle of contagion as before.

The main education unions urgently request, in addition to the traceability of cases and the strengthening of transport, update security protocols, give autonomy to the institutions in terms of schedules and staging of entries and exits and complete the vaccination of personnel as soon as possible.

Prosecutor opposes extending the curfew from Sunday in the Balearics