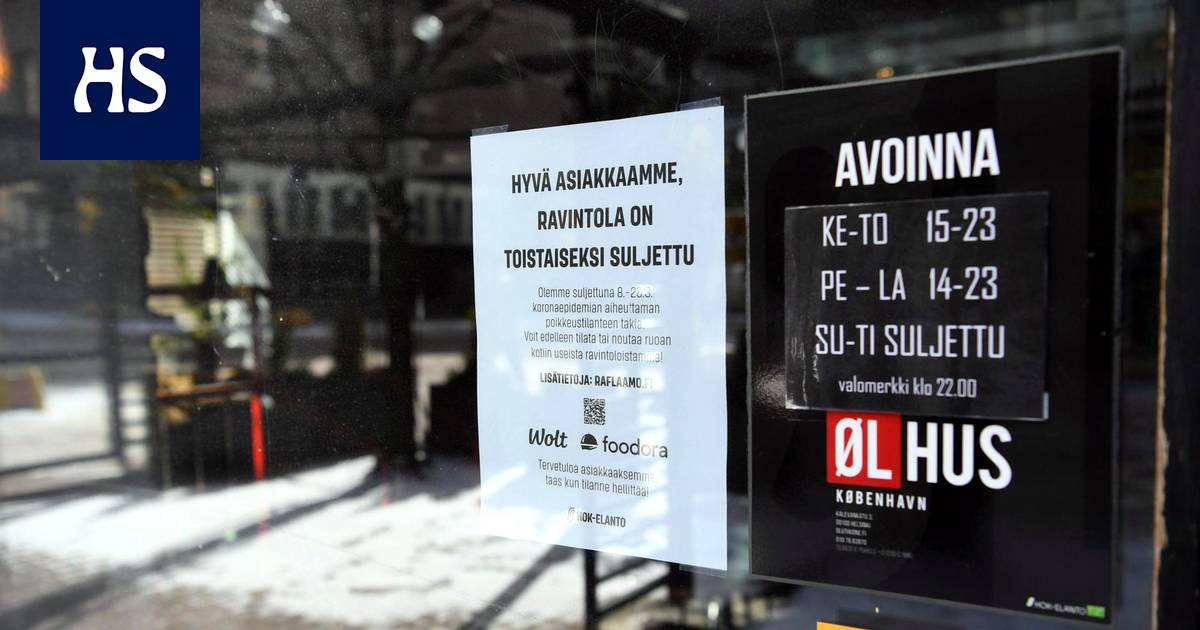 The strict restrictions that came into force in March are not yet reflected in the number of corona infections, but there is hope. Hus’s chief medical officer remains concerned that not everyone is following the recommendations.

People movement on Saturday evenings in the center of Helsinki has decreased significantly since the closure of restaurants and bars.

Crowds have been as much as 60 percent lower in places than on Saturday nights, when restaurants, bars and nightclubs were allowed to be open.

The data is based on Telia’s statistics. At HS’s request, Telia compiled statistics on anonymised mobile network data. For comparison, data on the number of people on four different Saturday nights in Helsinki were collected. The evenings were March 6 and 13, and March 7 and 14 last year. The statistics were compiled from five different locations in Helsinki, ranging from nine in the evening to ten in the evening.

In March came into force a set of severe restrictions in areas where the coronavirus pandemic is accelerating and spreading, such as Helsinki. One of the restrictions concerned restaurants, nightclubs and bars. They closed completely on March 9 and will remain closed until at least March 28.

The first Saturday in March stands out in Telia’s statistics. For example, more than 3,000 people stayed in the Triangle area on Saturday night, March 6th. The following Saturday, when the restaurant ban came into effect, the number of people had dropped to less than 1,500.

On Vaasankatu, the change in the number of people was the smallest, only about ten percent. However, the areas are different in terms of services and population, for example, and Vaasankatu has a relatively large population.

The statistics compiled by Telia include cases in which a person has spent at least 20 minutes within one area. If the same person has been in more than one area for twenty minutes during the same hour, he or she is logged in the statistics for other areas.

Movement has thus decreased, but it is not yet reflected in the number of infections or patients in the metropolitan area. It takes time for the symptoms of a coronavirus infection to develop and be diagnosed.

“However, the figures show that mobility has decreased, so it is assumed that the restrictions will have some effect on infections and possibly even patient numbers in the future,” says the chief physician of the Helsinki and Uusimaa Hospital District (Hus). Markku Mäkijärvi.

Honkanen also states that the decrease in movement is not yet clearly visible in the number of infections.

“So the epidemic is accelerating further, but the pace of acceleration seems to have leveled off a bit. Of course, the signal is still weak, ”he says.

Mäkijärvi considers the current restrictions and recommendations to be good. As long as they are followed.

“People still commit too much coronation sin. Restriction of movement is a really tough thing, and I don’t think anyone wants it if there are other options. And here it is, ”says Mäkijärvi.

Instead of stricter restrictions, such as outdoor movement rules, Mäkijärvi would like people to voluntarily reduce their contacts even more than at present. He is worried about people moving to friends and relatives, for example.

“It’s probably still happening. There has also been a message that peak buses and trains are pretty full and not everyone wears a mask on them. I’m worried about. I hope people think about whether they could move outside of peak hours. And maybe even HSL [Helsingin seudun liikenne] could consider adding shifts to peak times. “

This is how the data is compiled

■ The number of people not only describes Telia’s customers, but the company has expanded the numbers to cover the entire population by utilizing market share and population data.

■ It is not possible to determine the movements of individuals or telephones from statistics.

The possible Madrid shirt for next season is filtered