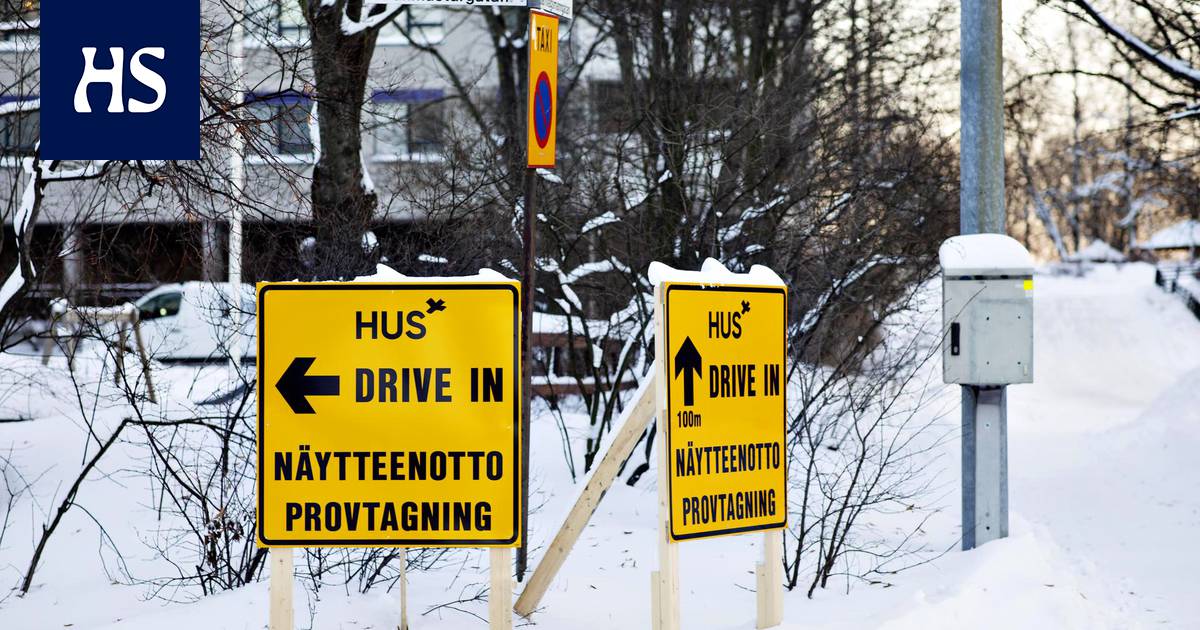 Hospital numbers and the proportion of positive samples in the samples tested are also in better shape, but the modification of the virus and the low level of enthusiasm of young people to take the tests still make the situation worrying.

January The first few weeks in the Helsinki and Uusimaa Hospital District (Hus) have looked promising for the coronavirus: the number of infections has decreased significantly since December.

Chief Medical Officer of Hus Markku Mäkijärven however, there is still no reason to sigh of relief.

In Helsinki, for example, the incidence of the coronavirus has halved from the worst phase in December. On December 3, the incidence rate in the city was 270.5, while on Tuesday it was 126.2. The infection rates for a single day are not as good a measure, but even on Tuesday the number in Helsinki was really low, only 28.

In the entire Hus area, on the other hand, the incidence is currently 104.8 cases per 100,000 inhabitants, says the National Institute for Health and Welfare crown map. In the last two weeks, 1,781 cases of infection have been reported in the area. In the previous two-week period, 1,905 cases were reported and the incidence rate was 112.08. So the direction is right.

“Testing volumes are currently lower than in the first weeks of December. At that time, we took about 6,000–7,000 samples a day, up to 8,000 during the Christmas ship weeks. Now about 4,500 samples are taken on weekdays and about 2,000 on weekends. So it is natural that the number of infections has decreased, ”says Mäkijärvi.

Young people in particular are less likely to take tests, while older age groups have more stable testing activity and the number of positive samples.

But what if there are only fewer infections?

Mäkijärvi is of the opinion that there are more infections than they appear.

“Testing volumes have almost halved since mid-December. Admission to the second or third test has decreased. When symptoms appear, you always have to go to the test again. Old tests don’t apply, ”he says.

On the other hand, the proportion of positive samples from all tests performed in the Hus area has returned to the same level as it was at the beginning of December before the holidays. The need for hospital care has also clearly declined from the worst weeks.

In the Hus area the source of the disease is typically home or close circle, and the majority of infections are diagnosed in those under 40 years of age. At the end of the Christmas and New Year festive season, a home competitor as a source of infection private meetings, parties and trips at home and abroad rose.

Mäkijärvi states that the epidemic is now in a calmer phase, but it is by no means over yet. Encouraging signs can be seen: the incidence of severe coronavirus disease appears to have decreased in the Hus area, as evidenced by the declining number of hospital patients.

“It can’t be said that the epidemic is going away. We are still in the spread phase in Uusimaa. ”

Last held on Friday at the corona briefing Mäkijärvi and the deputy chief physician Eeva Ruotsalainen expressed concern about the rapid spread of the new virus variant. The observed variant in the UK as well as the South African virus variant are more susceptible to infection than other virus variants.

“The better the virus is encountered in an epidemic situation, the better we will succeed,” concludes Mäkijärvi.

HS said on Tuesdaythat a few schools or kindergartens in Helsinki have doubts about the British conversion. The cases are not yet certain, as it can take up to a week to find out more about the genome of the virus. Hus outpatient treatment uses a corona test that identifies a virus from a sample of a specific gene fragment. The so-called S gene is missing from the British variant, but not only from it. In about half of the samples examined in more detail, this is ultimately not a British variant.

Mäkijärvi emphasizes that it is especially important to take the test, especially when trying to stop the spread of transformation viruses.

“The virus chains are big and spread fast,” he says.

“The epidemic is still in a dangerous phase. In the face of the threat of a conversion virus, you should follow the instructions and take the tests. ”

Dramatic hours in the impeachment process – a reconstruction

The Route of Money K: Martín Báez’s preventive prison was extended for one more month