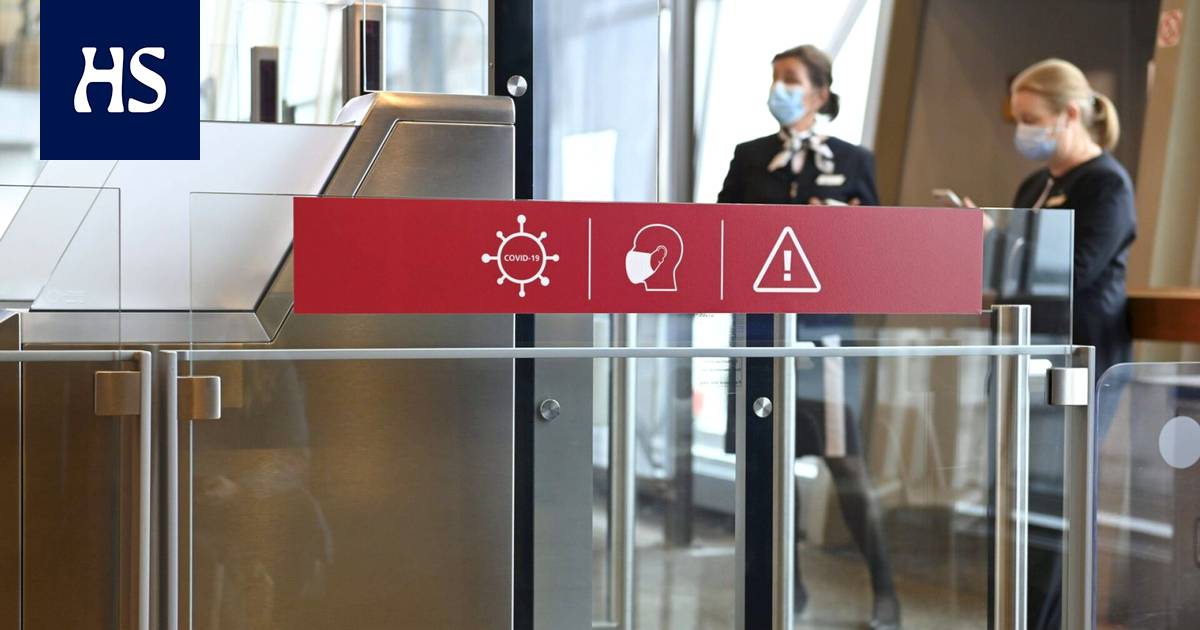 The proposal would allow entry without additional conditions for anyone who has received a full series of coronary vaccinations or protection within six months of an illness.

Government the bill on the new entry model returned from the consultation at the end of May.

The proposal, drafted by the Ministry of Social Affairs and Health, has been criticized for, among other things, the requirement of two tests and the fact that it treats those coming from all countries in the same way, regardless of the country’s disease situation.

For example, on Wednesday, the cities of Helsinki and Vantaa, as well as Finnair, Finavia, SAK and EK, organized joint briefing, where they criticized the performance in harsh words.

What would be required of those coming to Finland?

In the performance entry would be allowed without additional conditions to anyone who has received a full series of coronavirus vaccines or protection from covid-19 disease.

Thus, a full series of vaccinations could mean, for example, two doses in the case of Pfizer and Biontech, or one dose in the case of Johnson & Johnson.

If the disease has occurred, it should have taken up to six months.

A negative coronavirus test result would allow entry, but passengers would be required to take another test within 3-5 days of entry. The Department of Health and Welfare is already instructing voluntary quarantine for the waiting time for the test. The same guidance would probably be maintained.

In all cases, the traveler should present a pre-purchased, reliable certificate. If this is not the case, the passenger should apply for the test as soon as he or she arrives in Finland and for another test within 3-5 days.

How would the requirements be monitored?

Certificates inspections would be the responsibility of the municipalities where the border crossing points are located.

“If it is not possible to check the advance certificates of all immigrants, the checks can be carried out on a random basis,” the bill states.

If necessary, people could also be ordered for mandatory health check-ups under an existing law.

Helsinki and Vantaa, for example, have been concerned about how health care resources are sufficient to verify certificates as passenger numbers increase.

According to the bill, spot checks seem to be the only option from a resource perspective, even as passenger numbers increase.

In addition to spot checks, another option would be an automatic electronic verification of the certificate. This could mean, for example, checking the EU corona passport coming in July with a QR code.

Which model has been criticized?

Most prominent criticism has so far been made at a press conference on Wednesday, but many others have criticized the bill.

In the consultation, for example, the tourism industry criticized the requirement for a second test and the voluntary quarantine that is likely to be associated with it. In addition, among other things, the long period of validity of the law until May 2022 received criticism.

Lapland’s parliamentarians, for example, have also stated that they consider it important that Finland adheres to the “pan-European line”. Their concern is that the competitiveness of the tourism sector, which is vital to Lapland, would weaken in relation to other countries.

Read more: The government’s entry model hinders the recovery of tourism, say Helsinki, Finnair, EK and SAK, among others: “Our message is very serious”

How does the model relate to the rest of Europe?

In criticism the relationship of the bill to EU recommendations has been emphasized.

Finland’s requirements would apply equally to all people, regardless of the disease situation in the country of origin.

The future EU so-called corona passport could also serve as a certificate of entry.

If the passport had been obtained on the basis of a negative test result, Finland would, however, require another test after entry. The EU would not want any additional conditions for passengers in addition to the corona passport.

The EU Commission would like a second test or quarantine to be required only for those from countries with the worst disease situation, and no requirements for those from so-called green countries.

What do legal scholars say about the model?

Jurisprudence saw problems with the bill in the bill.

The basic problem seems to be that the government does not sufficiently justify the restriction of travel in the bill. This is stated, for example, by the Chancellor of Justice in his statements Tuomas Pöysti and the Ministry of Justice.

According to the Ministry of Justice, the proportionality, necessity and effectiveness of the measures proposed in the proposal, as well as their feasibility, remain unclear.

Current the bill is prepared by an office of the Ministry of Social Affairs and Health. Next, the governing parties will discuss the proposal.

According to the HS, there has again been disagreement among the government on the emphasis on economic opening of borders and on health security. The government’s sote ministerial group discussed the issue on Thursday.

Attempts are being made to get the law passed before the summer recess in Parliament so that internal border control can be abandoned during the summer.

On Thursday, the government decided to extend the current travel restrictions until June 27. The reason is that adequate measures to compensate for the restrictions are not yet in place.