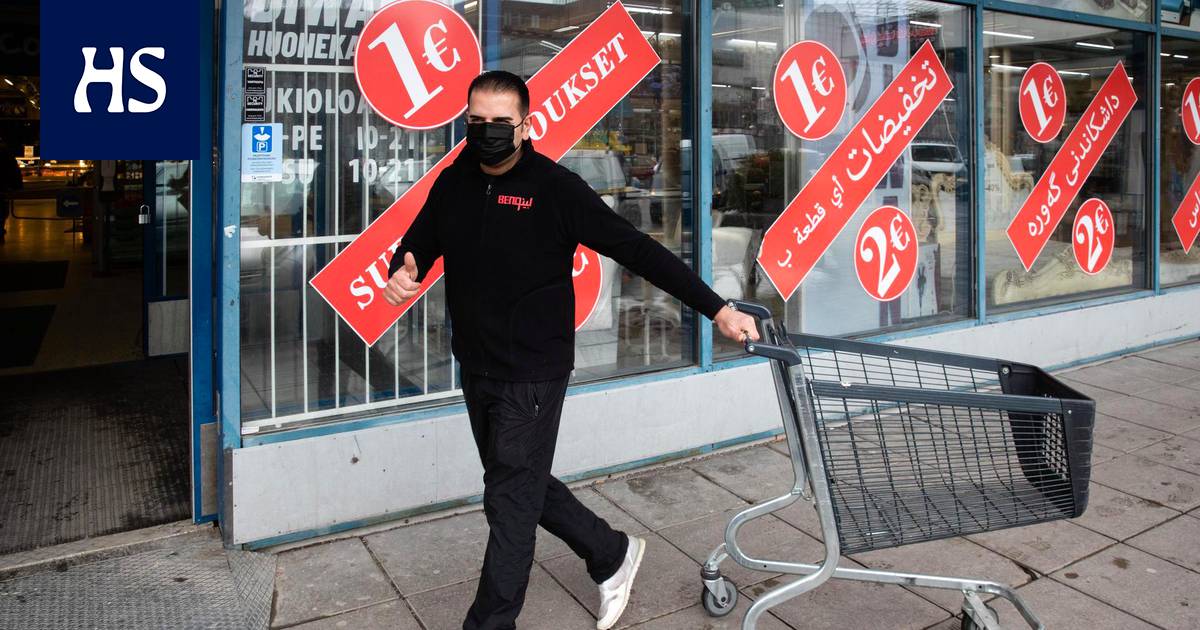 Infection statistics do not only show those with an immigrant background. The phenomenon believed to be structural applies more broadly to those belonging to the lower social classes.

Foreign backgrounds In the old shopping center of Puhos in Itäkeskus, which is also known as a meeting place for Helsinki residents, there is a lot of hustle and bustle in the middle of Tuesday. There are plenty of people on the move – all with a mask tightly on their face.

HS previously reported that the proportion of people with a foreign background in coronavirus infections in the metropolitan area has increased further over the past couple of weeks.

As many as half of the infections are now diagnosed in people with a foreign background.

Read more: Up to half of the infections are now found in foreign metropolitan areas – the same phenomenon can be seen in other major Nordic cities

Foreign language there are several background factors for a relatively higher rate of infection. Many of the reasons are structural.

The same phenomenon has been observed not only in Finland but also in other large Nordic cities.

However, it is not only those with an immigrant background that appear in infection statistics. The phenomenon applies more broadly to those belonging to lower social classes.

These groups combine occupations that are more prone to infections and more cramped housing.

Certain groups of immigrants may also have more social contacts than the native population due to community culture. For some foreign-speaking groups, the family size is larger than average.

It may also have had its own effect on the more contagious British variant of the virus, which passes more easily through family circles.

But what do foreigners themselves think about it? At Puhos, the atmosphere is busy and few people indulge in conversation.

There has been no corona in Razgar Abdullah’s immediate circle. The man himself considers restrictions important.­Picture: Juhani Niiranen / HS

Working as a supervisor in a grocery store in Beno Razgar Abdullah thinks that some foreigners do not take the corona strip very seriously, at least not as seriously as native Finns.

“This is just my opinion. I often see young people meeting each other and standing spending time close to each other without any masks. It [suositusten noudattaminen] not but somehow go to the head. Finns take their corona more seriously. ”

Abdullah himself is a supporter of strict restrictions and adheres to them in his own life – for example, he refuses to meet his mother for fear of this health. There have even been disagreements with acquaintances about literal compliance with restrictions. Part of their own community is strangled by a man’s strict line.

“They don’t say anything, but they see that it’s wondering.”

According to Salim Baliouzb, not all people just understand the need for corona restrictions.­Picture: Juhani Niiranen / HS

Helsinki Salim Baliouzb was just laid off from his job because of interest rates and hopes that the restrictions will be respected so that at some point life can slowly return to normal. Then you could also go back to work. The layoffs had already hit another due to the corona pandemic.

“This [koronavirus] continues to spread due to non-compliance with restrictions. We are without masks and we travel around. ”

Baliouzb believes that some foreign-language infections have their origins in non-compliance with restrictions. According to him, for example, not all mosques in the metropolitan area comply with assembly restrictions.

“I don’t want to name these places, but I know they pray there together, even though instructions have been given that they shouldn’t.”

HS did not reach representatives of Helsinki’s mosques to comment.

Husin chief physician of infectious diseases Asko Järvinen reported on Tuesday that in the Helsinki and Uusimaa Hospital District (Hus), the share of foreign-speaking people, ie non-Finnish and Swedish-speaking ones, has risen to 40–50 per cent, based on samples.

Read more: Up to half of the infections are now found in foreign metropolitan areas – the same phenomenon can be seen in other major Nordic cities

In Helsinki, the share of foreign-language infections rose to 39 per cent last week, and in Vantaa it has been 45–50 per cent in the first half of the year. In Helsinki, foreign speakers account for about 16.5 per cent of the total population and in Vantaa for about 21 per cent, so people with a foreign background are over-represented in infections.

Authorities in the metropolitan area have long sought to take measures to curb the spread of the virus among foreign speakers. It is difficult to influence structural reasons, but there has been an active focus on disseminating information.

Director of Immigration and Employment Affairs of the City of Helsinki Ilkka Haahtela says he met the mayor Jan Vapaavuori with the imams of Helsinki and had a dialogue with them on co-operation.

“Things have been taken seriously among imams. They are also concerned about the safety and situation of their members. ”

Individual events or mosques that have not complied with security arrangements have also come to Haahtela’s attention during the past year. City advisers have been sent to the scene and the situations have been reviewed together and it has been considered how they can be avoided in the future.

“We have gone through, for example, how safety gaps and masks can be utilized in the premises. Restrictions on gathering cannot be imposed on those affected by religious freedom without violating the practice of religion, but we can give advice on how to organize. ”

Haahtela points out that many mosques have very good and strict restrictions on visitors.

“There are some difficult situations known over the last year, but I have not become aware of them until recently. Mainly, we have been getting better all the time. ”

City has done a lot to increase communication, but still the effectiveness has not been enough, Haahtela says.

“In various construction sites and workplaces, as well as at home, infection chains have increased and quarantine guidelines have not always been followed, although this is a problem for the entire population. The situation is alarming, all the additional means that have been possible have not been effective enough. ”

In addition to the transmission of information, there are other reasons behind it.

“More generally, we see fatigue following the guidelines. Let’s get to how strict the restrictions are that, in the end, most would follow very strict practices at the moment. If the restrictions and recommendations were already followed, would anything more be needed? ”

Deputy Mayor of the City Sanna Vesikansan (green) says that the situation in Helsinki is serious overall.

“Infections have now risen alarmingly among all Helsinki residents. The increase in the share of foreign speakers is also worrying and we need to find new ways to do so. It is important that infections are reduced and that everyone understands how serious the situation is, ”says Vesikansa.

In Helsinki, corona counseling began in the autumn in shopping centers and various residential areas. Among other things, masks and information about test possibilities are distributed about corona counseling.

The City of Helsinki also cooperates a lot with various organizations, such as the Finland-Somalia Society. Coronation telephone counseling is also now also available in Arabic and Somali.

“The high proportion of infections from foreign backgrounds is also common in other European cities and models for action have also been sought internationally. An example of this is just walking into people, ”says Vesikansa.

Earlier mobile test containers also passed around eastern and northern Helsinki. However, as port testing expanded, containers had to be moved to ports.

“The mobile test points would be needed back quickly and are being added by Hus. It’s important to bring unanswered test opportunities now close to people. ”

Puhos sitting in front of a car Shaman Yassen says she is taking food to her daughter who is in distance education. Restrictions are familiar and are followed, even if they make life awkward at times, Yassen says.

Shaman Yassen went to fetch lunch for his daughter, who is in distance education, from his brother’s restaurant in Puhos shopping center. He considers the current restrictions necessary.­Picture: Juhani Niiranen / HS

Some of Yassen’s friends see each other and keep celebrating despite the restrictions. Yassen has missed such gatherings.

“I refused to celebrate and seeing my friends who have wanted to meet you. The restrictions are good, but sometimes it gets boring. “

Infinite sadness: There will be no Days Gone 2 | EarthGamer

Trouble at Borussia Dortmund: Haaland is beside himself with anger