Corona measures and democracy: state parliaments want to have a say 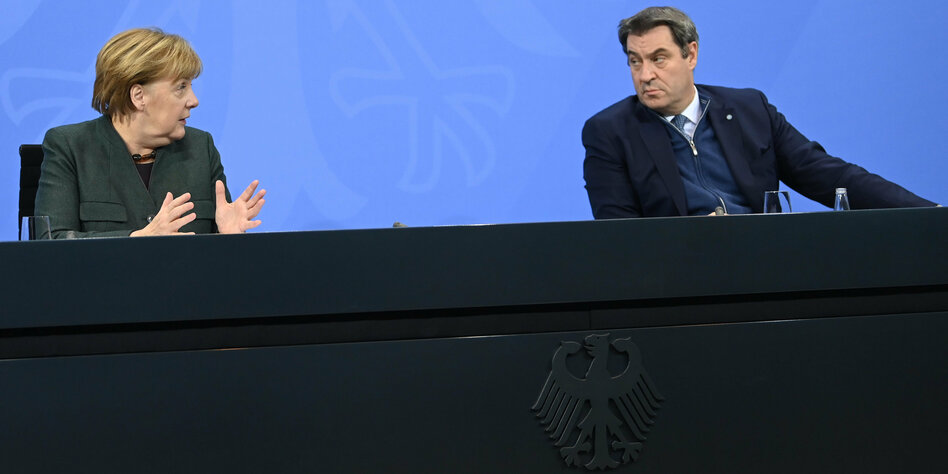 Merkel and Söder at the press conference on the federal-state consultations Photo: Filip Singer / Pool / dpa

FREIBURG taz | The democratic basis of the shutdown decision is delicate. The state governments always decide on severe restrictions on fundamental rights for citizens and companies. But the parliaments of the 16 federal states are also increasingly intervening.

On this Tuesday, Chancellor Angela Merkel met again with the usual group of 13 prime ministers from the regional states and the three ruling mayors of the city-states of Berlin, Hamburg and Bremen. They passed a ten-page resolution that the massive shutdown will be extended to February 14th. Medical masks are to become mandatory in local transport and retail.

The decision is nothing more than a political recommendation. The federal states try – with the moderation of the Chancellor – to coordinate as well as possible, because excessive regional differences would jeopardize the acceptance of the measures. Only the statutory ordinances of the federal states that the state governments will pass in the coming days are legally binding.

It is regulated in the Federal Infection Protection Act. And the states have so far fought off all attempts by the federal government to centralize decisions about the corona restrictions.

The federal government recommends that the state implement

It is now repeatedly criticized how little the Bundestag is involved in this process, although it is about massive encroachments on fundamental rights. But when the decisions are made at the state level, the Bundestag has no access. Rather, the 16 state parliaments are responsible for democratic control and legitimation.

However, at the beginning of the pandemic, they were completely overwhelmed and simply let the respective state governments have their way. The parliamentarians were not used to the fact that central political decisions are constantly being made at the state level and they also had no suitable instruments for this.

After almost a year, however, a lot has happened. The state parliament in the green-black-ruled Baden-Württemberg was the pioneer with its participation law in July 2020. In the second corona wave, Hesse, Brandenburg, Bremen, Hamburg and Berlin followed with their own laws from December 2020. The Saarland wants to follow suit soon. Saxony and Thuringia have adopted new rules for parliamentary participation as resolutions of the state parliament. In Rhineland-Palatinate there is an agreement between the state parliament and the state government.

Berlin: No restrictions on fundamental rights without a parliament

In Baden-Württemberg, the approval of the state parliament is not required immediately, but whenever a corona ordinance is to remain in force for longer than four weeks, the people’s representatives must assume joint responsibility. Originally, “two months” were prescribed as the threshold for a parliamentary decision. In December the threshold was lowered to four weeks.

In the other federal states, it is primarily ensured that the state parliaments are informed in good time about the planned ordinance so that they can intervene in good time. In nine federal states the information takes place before the decision of the state government, in ten states (also) afterwards.

In Thuringia, the state parliament must be able to take a stand

However, the more or less strong participation of the state parliaments has not led to a corona ordinance of the respective state government being stopped in any federal state. However, this is not surprising, but corresponds to the parliamentary system of government, in which the government is supported by the majority in parliament.

Participation in parliament is therefore primarily about transparency, debate and legitimation. The state parliaments not only participate in the resolution of new corona ordinances. Figures from North Rhine-Westphalia prove what the dominant topic Corona was in 2020 for the state parliament. There were 280 small questions and 18 parliamentary group motions on this topic – and even five special sessions of the state parliament, more than ever before.

The administrative courts are also responsible for checking the corona ordinances and, in particular, check the proportionality of the measures. Administrative courts can be called on by all affected citizens and companies. When the infection rates were still relatively low, they objected to some ordinances, such as bans on accommodation.

At the federal level, political pluralism is expressed above all in the context of the federal-state conferences. Because there are now heads of government from five parties (SPD, CDU, CSU, Greens and Left), the debates in the run-up to the corona summit are not only federally but also politically relevant.

What is decided in the end is much more unpredictable than any Landtag or Bundestag session. And a certain unpredictability has always been good for public attention and political legitimation.

Trial. Leaning out of the windows like a philosopher