Corona issue: how business and virologists reacted to restrictions in Moscow 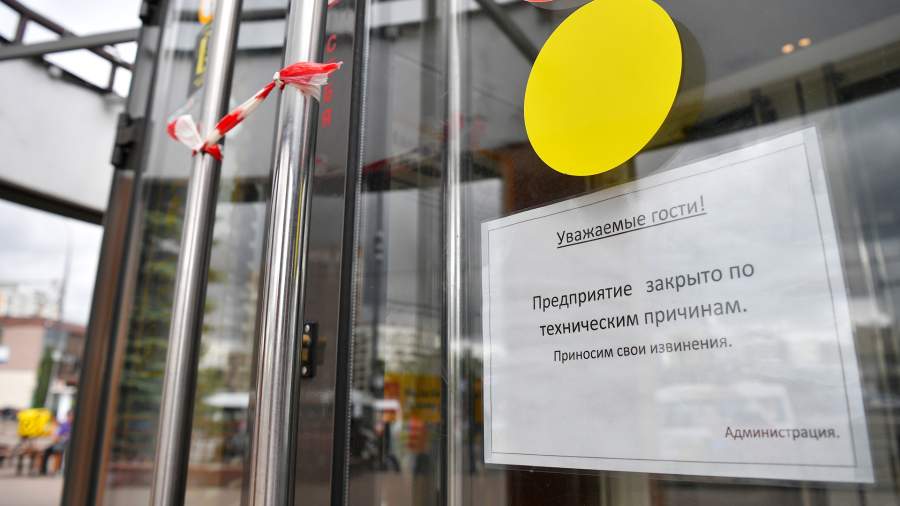 The decision of the Moscow authorities to make the next week a non-working week will not greatly affect the catering sector – most cafes and restaurants do not work at night anyway. And here the closure of nightclubs and food courts in shopping centers could undermine the mall’s profit margins, industry representatives told Izvestia. The business community also fears for the SME sector, after all, many small companies have not yet moved away from the last lockdown, and now they will have to skip a week and at the same time pay salaries to their employees. Virologists, meanwhile, recognize that restriction measures are the only way out with an increase in the number of cases, and they will have to resort to it until citizens stop unreasonably fearing vaccination… What caused this dynamics and when will it be possible to defeat the pandemic – in the material of Izvestia.

How much is sick and what will be closed

On June 12, Moscow Mayor Sergei Sobyanin signed a decree stating that days from 15 to 19 June will be non-working days. At the same time, wages will remain, he stressed. It is not yet planned to declare these days as days off throughout the country., said later the press secretary of the president Dmitry Peskov. He added: the heads of the regions of the Russian Federation are exercising their special powers.

– The number of newly diagnosed cases of covid jumped to the peak values ​​of the last year… To provide medical care for a large flow of patients, we are forced to re-profile thousands of beds in city hospitals, ” Sergei Sobyanin described the situation on his official website.

The most alarming symptom of recent weeks is people have become more sick with covid, there are many young patients among the patients, the mayor emphasized. The proportion of people infected between 18 and 35 years old increased by 35% in two months and accounted for almost a third of all cases, the headquarters confirmed. The number of people infected increased by 70% from last week, and the number of hospitalizations – by 30%. Such dynamics was noted for the first time since the beginning of the year, they noted there.

About 14 thousand beds have been deployed in the capital to receive patients with coronavirus, of which 78% are filled, said the head of the Moscow headquarters Anastasia Rakova. On June 15, GKB No. 15 named after V.I. O. M. Filatova, which will increase the total fund by another 2 thousand beds.

– Also in the coming days, we will repurpose five more polyclinics for the diagnosis of coronavirus infection, by the middle of the week the number of CT centers will reach 30, – said Anastasia Rakova.

In the capital already starting from June 13, employers have been advised to transfer at least 30% of employees to telecommuting… From the same day to June 20 the work of food courts and children’s playrooms in the shopping center is suspended. Amusement rides, playgrounds and sports grounds, rental points, gazebos will be closed in the parks… Besides cafes, bars and restaurants will not work in Moscow from 23:00 to 06:00, food can be taken away.

The mayor’s decision does not apply to organizations that are critical for ensuring the functioning of the city’s infrastructure, as well as defense enterprises, Rosatom, Roskosmos and some other strategic industries.

How business will survive

The new rules will not affect the fanzone at Luzhniki, where Euro 2021 matches will be broadcastAlexei Nemeryuk, head of the Moscow department of trade and services, told reporters. Also, according to him, measures to restrict the work of cafes and restaurants at night will not affect most catering establishments…

Igor Bukharov, head of the Federation of Restaurateurs and Hoteliers, confirmed to Izvestia that the standard for restaurants is to close the kitchen at 23:00 and the establishment itself at 24:00. Exceptions can be point and on weekends, the expert specified. Nevertheless, revenue is likely to fall: some of the guests will go into self-isolation and will not go to restaurants.…

Alexey Mostovshchikov, a member of the General Council of Business Russia, believes that the new restrictions will seriously affect the catering industry, which was just beginning to recover from the consequences of the last lockdown.

– In the absence of government assistance, the industry risks falling into a crisis on a scale we have never seen before.– he fears.

Boris Titov, Commissioner for the Protection of the Rights of Entrepreneurs under the President of the Russian Federation, agrees that the decisions taken will lead to inevitable losses. Many have not yet recovered from previous restrictions: they did not pay off debts, did not cover loans, are suing landlords, noted the Ombudsman of the Moscow restaurant market, the founder of the restaurants “Meat & Fish” Sergei Mironov. The restaurateur believes that restricting the work of children’s rooms and food courts can harm restaurants that are focused on family vacations.

– I think mass events will begin to be canceled, again, everything will go online or hybrid format. Apparently, it will be like this until September, – General Director of Moscow Event Roman Yakovlev shared his forecasts with Izvestia.

According to Pavel Gagarin, member of the General Council of Business Russia, Chairman of the Board of Directors of Gradient Alfa Investments Group, the new restrictions will have minimal impact on businesses that provide services online… Shopping centers and tourist business will suffer the most in a week.

Also long days off that must be paid will exacerbate the situation of small and medium-sized entrepreneurs with low business margins and those companies, most of the costs of which are the salary fund. The series of bankruptcies of SMEs did not stop since the first lockdown, now it can intensify, says Pavel Gagarin.

According to the forecasts of Oleg Voitsekhovsky, Managing Director of the Russian Council of Shopping Centers, due to the closure of food courts, visitor traffic in malls may decrease by 7%… In this case, the drop in revenue will be 10-12% of the rental income of the shopping center, he said.

What is the reason for growth

The increase in the incidence of COVID-19 is natural – it is associated both with the mutation of the virus and with the fatigue of people from the restrictions that have been in force for more than a year., says the chief physician of “Invitro-Moscow” Sergei Khomyakov.

– In the last month, people have observed less social distance, wear masks and gloves less often, but they began to travel. Russians are not so actively vaccinated – only about 10% of the population are vaccinated… Even taking into account 5 million people who have recovered, herd immunity has not yet reached the target values ​​of 60-70%. The situation is complicated by the fact that the peculiarities of immunity are not quite clear both in those who have been ill and in those vaccinated, – he told Izvestia.

Four Covid preparations are available in Russia – Sputnik V, EpiVacCorona, KoviVak, Sputnik Light. With total vaccination, 60% will be achieved only by autumn, the specialist explained.

– We expect that additional days off will allow Muscovites to take a closer look at their health – to pass tests for antibodies to coronavirus, nasopharyngeal swabs for PCR and get vaccinated, – the expert summed up.

Now a “pool” of patients has been formed who had recovered from coronavirus 6-8 months ago. During this time, they managed to lose their immune defense., Olga Shuppo, scientific director of the network of clinics for immunorehabilitation and preventive medicine Grand Clinic, told Izvestia.

– Due to a decrease in immunity, stress, a deficiency of vitamins and microelements, as well as a mutation of the virus, people began to get infected again. It is for these reasons that we are seeing an outbreak in June, ”she said.

Sergei Netesov, head of the NSU laboratory of bionanotechnology, microbiology and virology, complained in a conversation with Izvestia: virologists and epidemiologists warned that in no case should we relax.

– However, for some reason, they began to open international directions. And this should not be the case with such a low vaccination coverage, the expert is sure.

In his opinion, air traffic can be opened only when 100% of passengers on board have been vaccinated…

And when it all ends

To break the chains of transmission of infection, it was necessary to extend the weekend – this is the only way out that can somehow stabilize the situation, says Yevgeny Timakov, an infectious disease specialist and vaccinologist, chief physician of the Leader-Medicine medical center.

In his opinion, the third wave began a month and a half to two months ago, both doctors and hospitals were ready for it, but not ordinary citizens… The increase in the incidence will continue in the country for another 1.5-2 months, and its dynamics should be slowed down by the extension of vacations, the departure of a third of workers to remote work and the isolation of vacationers in their dachas, the expert added, stressing that vaccination should be the best protection.

Experts believe that if all the recommendations are followed, it is possible to break the chain of infections in two incubation periods, that is, at least 28 days.

Restrictive measures can take a long time, but they won’t help until most people get sick or get vaccinated., says the director of the Scientific and Clinical Center for Precision and Regenerative Medicine of the KFU Albert Rizvanov.

– The fact is that during the period of restrictions, the immune layer does not grow. The only way to form herd immunity is vaccination. BUT it goes very slowly because people unreasonably distrust vaccinations– he appreciated.

Pavel Volchkov, head of the MIPT genomic engineering laboratory, praised the measures announced by Sergei Sobyanin as “timely and competent.”

– If it is still not possible to achieve universal vaccination, then we will fight the epidemic as in the old days – with quarantine measures.– he told Izvestia.

The specialist advocates the introduction of exemptions for those who have a certificate. “And those who have not received the vaccine stay at home. It is clear that there are medical reasons not to be vaccinated, but most are simply afraid that the drug will cause them some damage – this is antisocial behavior, ”he stressed.

For the pandemic to subside, at least 16 million more citizens must be vaccinated… If there are 35-36 million of them, this will radically change the course of the epidemic in the country, the expert said.

– It is necessary to create some kind of system that will induce the hesitant citizens of Russia to take a root. We are delaying vaccination so much that after a while the vaccine itself will be meaningless., – added the virologist.

Besides, Moscow strains of coronavirus may spread in the capital, said the deputy director of the Gamaleya Center Denis Logunov during a conversation with President Vladimir Putin after the state awards ceremony in the Kremlin. It is important not to miss these strains in order to have time to adapt existing drugs for them or to make new versions of vaccines, said Denis Logunov. According to the head of state, to develop herd immunity, 60% of Russians need to be vaccinated or ill…