Corona: Groko decides to relax people who have been vaccinated – Merkel hope from internal meeting has become public 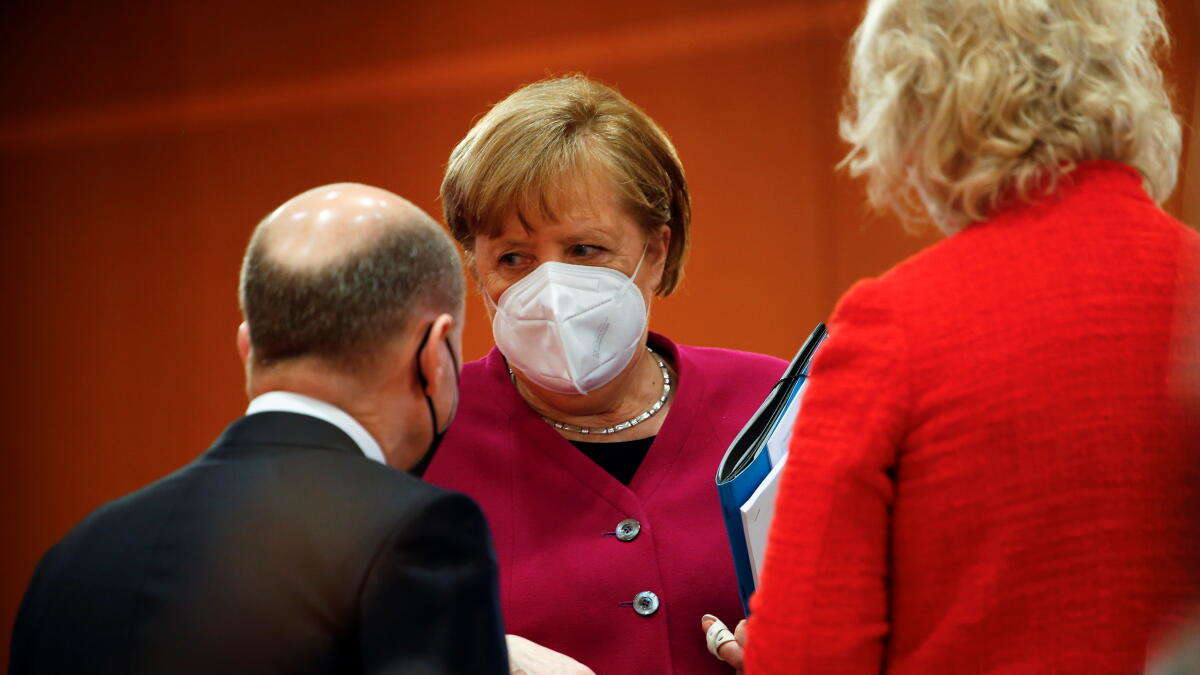 The federal cabinet has decided to relax those vaccinated against corona. Restrictions on fundamental rights such as contact and exit restrictions are to be withdrawn. News ticker.

Update from May 4th, 4 p.m .: Chancellor Angela Merkel * (CDU) said she was pleased about the relaxation of the corona infection in the country. There is “light at the end of the tunnel,” she said, according to information from the German Press Agency from participant circles on Tuesday in online deliberations of the Union parliamentary group in the Bundestag. The Chancellor referred to the falling number of cases and a slight relaxation in intensive care medicine. At the same time, according to this information, Merkel warned that the more carefully you proceed now, the faster everyone can benefit from the easing. The ordinance for relaxation for vaccinated persons from the federal government (see first report) should be dealt with in the Bundestag this Thursday and in the Bundesrat this Friday.

Meanwhile, Union parliamentary group leader Ralph Brinkhaus spoke out in favor of unbureaucratic easing of corona rules for vaccinated and convalescent people. “With all measures it is also about having an acceptance for the whole thing,” said the
CDU politician. However, Brinkhaus was reluctant to open up the catering and hotel industries as soon as possible. Against the background of the “positive vaccination progress”, the situation will have to be reassessed again in May and June – and agreed with the scientific community to see which reliefs will then be possible. “Of course, as far as this is epidemiologically justifiable, we have the strong will, as many basic rights as possible, to make opening steps possible accordingly.”

First report from May 4th: Berlin – The Federal Cabinet has made it easier for people vaccinated against Corona. The government passed the planned regulation on Tuesday, as Federal Justice Minister Christine Lambrecht (SPD) * said in Berlin. Among other things, there are plans to relax the previous requirements for contact restrictions and curfews. In addition, those who have been vaccinated and those who have recovered should be treated equally with people with a negative test result.

The Bundestag * and Bundesrat now have to make a final decision. That should be done by Friday. “An important step towards normality,” said Lambrecht. If everything is decided as planned, the easing could apply as early as the weekend.

In a constitutional state it must be clear that the restrictions are only possible with “good reason” in order to protect the life and health of others. “As soon as this reason ceases to exist, it must be just as clear that this restriction can no longer be made either.” The positive development of the incidence figures “gives us hope that we are all on the right track,” added the Justice Minister.

In addition to the Bundestag, the federal states also have a say. However, they will support the rapid relaxation according to Baden-Württemberg. “I think that we will decide that on Friday in the Federal Council *,” said Prime Minister Winfried Kretschmann (Greens) * on Tuesday in Stuttgart. Nobody wants to stop this process now.

Relaxation for corona vaccinated people: Merkel’s cabinet initiates regulation – countries have so far been going their own way

The federal government issues the ordinance on the basis of the new Infection Protection Act. The regulation should bring a uniform line in Germany, because many federal states are already going their own way with the easing for corona vaccinated people. In Bavaria, for example, as of this Thursday (May 6), people who have been completely vaccinated against Covid-19 will be equated with those who have tested negative and will be awarded further relaxations. Among other things, people with a full corona vaccination – i.e. usually with two administered vaccine doses – should be exempted from test obligations and from the nightly exit restrictions. Fully vaccinated persons are not included in the maximum number of contacts allowed.

Saxony will also equate people who have been fully vaccinated against Corona and those who have recovered from May 10th in many points with those who have tested negatively, as Saxony’s Minister of Health Petra Köpping (SPD) announced on Tuesday. For vaccinated and convalescents, the obligation to test should specifically be dispensed with in many situations. People are considered fully vaccinated 14 days after their second vaccination.

But the demands also go a little further: CSU regional group leader Alexander Dobrindt has campaigned in the discussion, for example, to reopen culture, gastronomy and hotels under certain conditions. On the basis of the planned ordinance, the aim should be that in counties with an incidence of less than 100 these areas would be made possible again for those who have been vaccinated and those who have recovered.

It could not only be about allowing vaccinated people to visit the hairdresser without a test or that there are no more exit restrictions for them at 10 p.m., said Dobrindt. More normality must be possible – this includes culture, gastronomy and the hotel industry. This is only a first step for the CSU. You can’t wait until everyone in Germany has been vaccinated. “Fundamental rights cannot be restricted by the fact that some do not want to be vaccinated or have not yet been vaccinated,” emphasized Dobrindt. There was a high level of vaccination in May and June, said Dobrindt. The CSU * then expected a further step, which would basically provide this normality for vaccinated and convalescent people.

The deputy leader of the FDP parliamentary group, Stephan Thomae, also called for people who have been completely vaccinated and recovered to have minimal risk of infection if they should be given access to sports facilities, hotels and indoor restaurants. The same should apply to those who have been tested. The economic policy spokesman for the left-wing parliamentary group in the Bundestag, Klaus Ernst, also called on the federal government to “let restaurants, hotels and cultural institutions resume operations immediately”.(AFP / dpa / cibo) * Merkur.de is an offer from IPPEN.MEDIA.

Biden said he hopes to meet with Putin in June