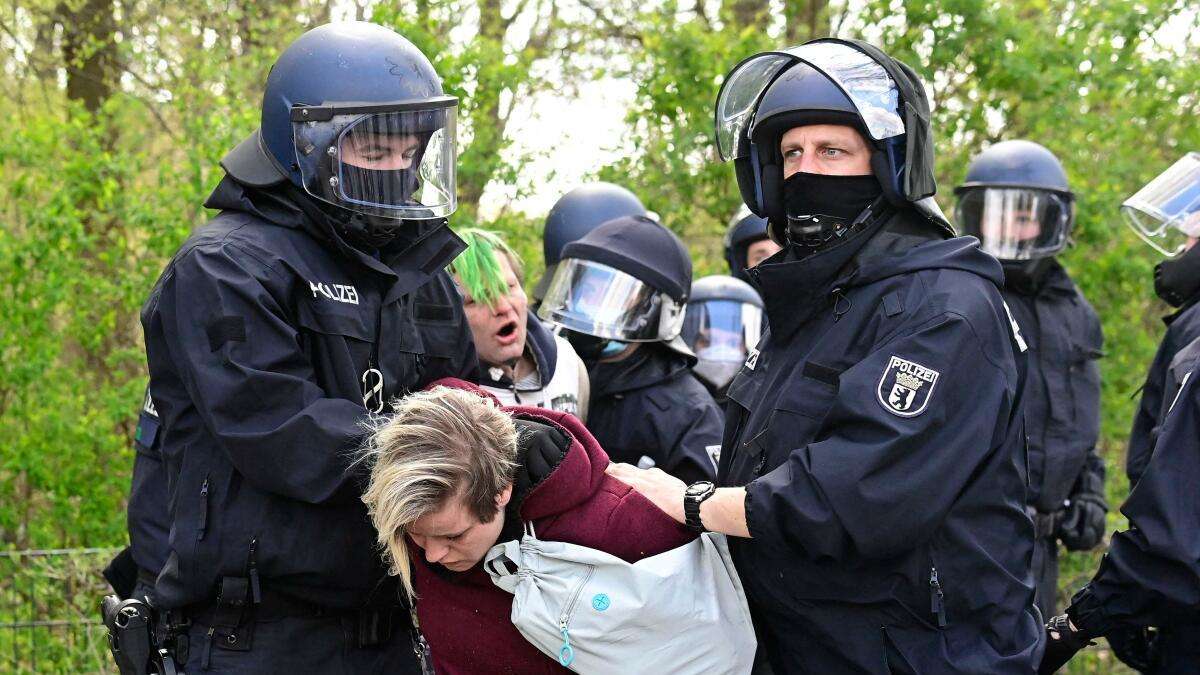 In Berlin, thousands of demonstrators gather in front of the government district before the vote on the nationwide Corona emergency brake. The news ticker.

Update from April 21st, 2:50 p.m.: As the Berlin police wrote on Twitter, there were seven more arrests in the Tiergarten. There were “physical attacks on our colleagues as well as attempted release of prisoners”. The police officers had to use physical force (“punches and kicks”).

40 arrests had previously been reported after the meeting was broken up on Strasse des 17. Juni near the government district.

in the #Ziergarten After personal checks, there were physical attacks on our college. and attempted release from prisoners – 7 people were arrested.
Physical force (punches / kicks) also had to be used.# b2104

Corona emergency braking demonstration in Berlin: Tumultuous scenes in the Tiergarten in front of the government district

Update from April 21, 2:30 p.m .: In Berlin’s Tiergarten, where there are still many demonstrators against the Corona emergency brake and Covid-19 policy, there are now more tumultuous scenes and arrests.

How FOCUS Online reported that a larger group tried to climb over barriers in front of the government district. The police had occasionally used pepper spray and, conversely, officials had been pelted with bottles. According to the police, the officers also had to use “punches and kicks”. The gathering with an estimated 8,000 participants on the Straße des 17. Juni had been terminated by the police for disregarding the Covid-19 protective measures.

However, many demonstrators are still waiting in the zoo, including allegedly numerous corona deniers and lateral thinkers.

Update from April 21, 2:15 p.m.: There are still many demonstrators gathered near the Strasse des 17. Juni in the zoo. Although the police broke up the meeting around noon – because of violations of the Corona rules.

At World live there are individual scuffles with the police and arrests by the officers to be seen. A hundred now apparently join the group of people, among which many corona deniers are said to be lateral thinkers. According to the Berliner Zeitung, isolated demonstrators had called for people to move on to Kurfürstendamm. According to matching media reports, around 8,000 demonstrators are said to have marched in front of the government district in the morning.

Update from April 21, 1:15 p.m.: It will be much rougher on the Strasse des 17. Juni in Berlin. In isolated places, groups of demonstrators form sit-in blocks. These are carried away by police officers in heavy gear. Sometimes there are fights, several arrests can also be seen. Quite a few of the protesters do not wear face masks.

According to media reports, the Berlin police tried very communicatively to push the demonstrators towards the southern Tiergarten. “People do not withdraw voluntarily. Many stayed. We are starting to push away physically in order to prevent the risk of infection, ”explains a police spokesman World live: “We are so prepared that they withdraw completely.” Around 2500 police officers are said to be on duty.

Update from April 21, 1:05 p.m.: Large groups of demonstrators still refuse to leave the Strasse des 17. Juni. Individual protesters go into sit-in strikes. Also reported World livethat several demonstrators had tried to get across the zoo in the direction of the government district and the Bundestag. The tightened Infection Protection Act is currently being voted on in parliament.

Update from April 21st, 1 p.m.: According to Berlin newspaper There have been 40 temporary arrests so far in connection with the anti-Corona emergency braking demonstration on Straße des 17. Juni and around the government district – for violating the Covid-19 rules. The meeting has meanwhile been declared over by the authorities. But TV pictures show that quite a few demonstrators have so far refused to leave the zoo.

Corona emergency brakes demo in Berlin: Police dissolve the meeting – because of a number of Covid 19 violations

Update from April 21, 12:35 p.m .: The Berlin police declared the meeting on Straße des 17. Juni over. There have been numerous violations of hygiene regulations and distance rules.

“Since the meeting leader of the meeting on Straße des 17. Juni could not influence the participants of the meeting to the required extent despite repeated requests, the meeting is being dissolved by our head of operations,” writes the Berlin police on Twitter.

TV pictures show that many hundreds of demonstrators remain in the zoo. According to the Berliner Zeitung, individual demonstrators have announced sit-ins, and other participants in the gathering are calling via megaphones to move through downtown Berlin to Kurfürstendamm.

Update from April 21, 12.20 p.m .: In Berlin, the situation at the anti-corona emergency brake demonstration remains tense. TV pictures show a large number of police marching towards the Brandenburg Gate. With a large contingent, around 2,200 officials secured the government district that morning. Sometimes with heavy equipment such as water cannons.

As blogger Nicholas Potter writes on Twitter, individual lateral thinkers and corona deniers are meanwhile trying to break away in the Tiergarten and get to Parliament. The police stopped such attempts directly.

According to initial reports, the demonstrators include curiously disguised and masked people, for example a “Captain Future” based on a comic figure can be seen.

demo trying to cross through tiergarten to get to bundestag, including #qanon followers and “captain future”. easily stopped by police but cat and mouse situation # b2104 pic.twitter.com/FxujaNn7CG

Corona emergency brakes demo in Berlin: Hardly any masks – police are threatening to dissolve the meeting

Update from April 21st, 11.50 a.m .: The Berlin police now speak of around 4,000 demonstrators in front of the government district. According to Berlin newspaper the meeting could soon be dissolved.

“There are violations of the mask requirement, the minimum distances are not adhered to,” police spokesman Thilo Cablitz is quoted as saying. The officials had warned the chairman of the meeting in this regard. “If he can’t get it under control, the gathering will be broken up by the police,” explains Cablitz. As the Berlin newspaper reports, police dogs and mounted police officers are among the forces. According to consistent media reports, water cannons are also available in the government district.

According to the authorities, a total of 2200 police officers are on duty, including support forces of the federal police from five federal states.

Update from April 21, 11:40 a.m.: Which uniform corona rules will Germany have to face in the Covid 19 crisis *? The Bundestag is currently discussing this in a heated debate on the statutory Corona emergency brake.

Not far from parliament in the zoo around the Victory Column, thousands of demonstrators have gathered to protest against the planned measures. Many of them do not wear face masks, as TV pictures show. The police have cordoned off the government district at the Brandenburg Gate with personnel carriers. Apparently, the demonstrators shouldn’t even come to the Bundestag.

According to Berlin newspaper the police banned four demonstrations in the federal capital this Wednesday. According to Welt, several demonstrations had been announced. The situation is currently still confusing. “Peace, freedom, no dictatorship,” read the demonstrators’ posters.

First report from April 21st: Munich / Berlin – Before the vote on the nationwide Corona emergency brake in Berlin, thousands of demonstrators gathered for protests in the area of ​​the zoo in front of the government district.

The world reported “a maximum of 10,000 demonstrators”. However, the situation is difficult to oversee. 2000 police officers are therefore on duty, water cannons are ready. TV pictures show the first fights by the police with Protestants who apparently do not wear face masks. (pm)

Coronavirus Should children be vaccinated, even if the coronavirus epidemic is reduced with adult vaccinations?

The most unloved household chores of Russians named