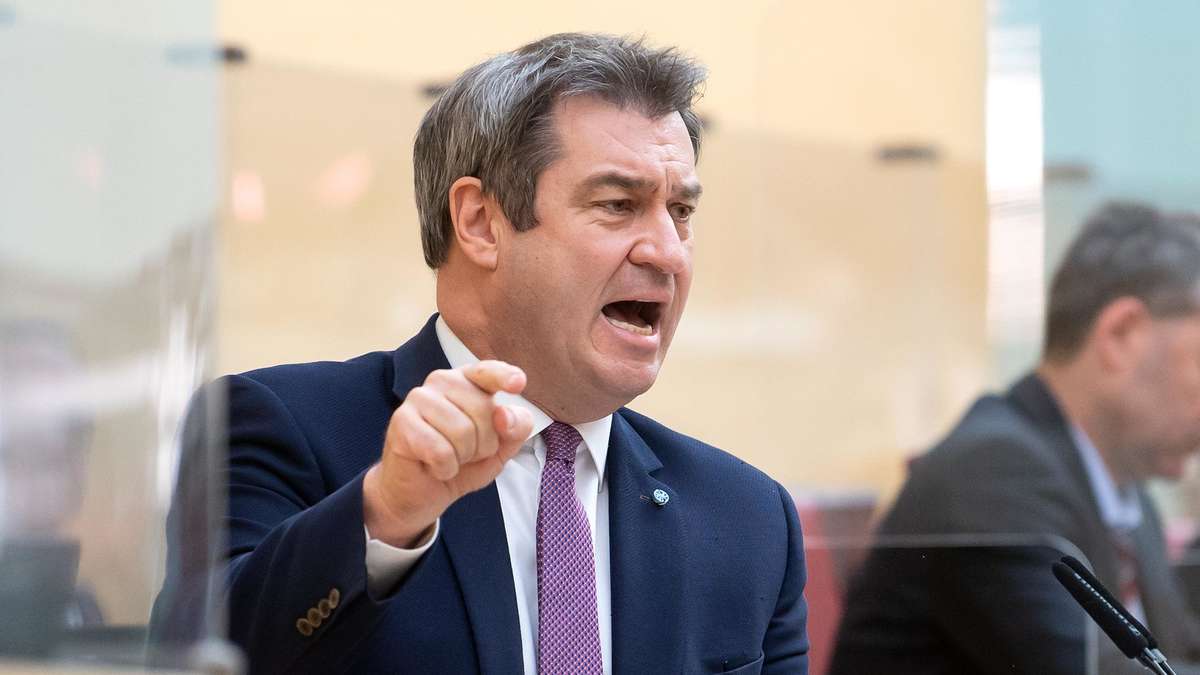 The Union is on a steep decline. And for CSU boss Markus Söder, the problems in Bavaria are growing everywhere.

Munich – The descriptions of this wild day already diverge in the morning. As always, the Prime Minister started the day very evenly, it is said in those around him, at best a little “combative”. Members of parliament report more colorfully that he was already “pissed off” at 8 o’clock in the morning in his CSU parliamentary group, “the anger came out of every pore”. And his mood did not improve there.

Be that as it may: you can’t blame him for it. At the moment there is a fire in all corners of the CSU *. For days, the party has been shaken by the mask deal affair. Even in the party’s history, which is full of scandals, this is a wild number. Söder wants to limit the damage with transparency, new laws, rules and party statutes.

Corona policy of the CSU in the crossfire: Söder even flies back and forth within the party

At the same time, the Corona * policy of its governments in Berlin and Munich is on fire more than ever. Massive criticism comes from the population, but also from within their own ranks. It’s about the big line, more loosening up or more rigor, but also about details: even the Federal Minister of the Interior * Horst Seehofer tore apart a newspaper interview asking the churches to only hold services online. “Neo-pagan,” complain board members. The result is sharply falling polls for the Union. 26 to 28 nationwide, for the CSU in Bavaria that shouldn’t be more than 40.

The morning session with the MPs is spectacular in itself. Several speak up, it is one of the few circles in which politics is still spoken in plain language. The “existence of the People’s Party CSU” is at stake, for example Ebersberger Thomas Huber is quoted as saying. He means the Raffke number, but also the “catastrophic corona management in Berlin”, he names several CDU * ministers, including Jens Spahn (health) and Peter Altmaier (economy). Several other parliamentarians are working on the Easter quiet that has not yet been tipped off, others again and again on Söder’s focus on the incidence figures as the basis for all measures.

Söder * himself complains in the parliamentary group about the free voters. He accuses the coalition partner of duplicity: in the cabinet every step is decided unanimously, outside the partner distance himself from it. The climate in the alliance is becoming toxic. Leading FW MPs spread ridicule about the Easter chaos on Wednesday. They derisively quote an earlier Söder sentence that the free voters in Berlin only have as much influence “as on the moon”. Perhaps “reliability and trust” are just more important, FW people tweet. One speaks of a “demarcation line” between parliamentary groups and the Söder government. The faction even writes in an official press release that it is “pure mockery” to keep the holiday apartments in Bavaria closed, but to allow flights to Mallorca.

Söder doesn’t want to accept this game anymore. You have to show the free voters “who is the boss in the house”, he is quoted as saying. Wherever Söder is in combat mode, he also takes on the greens. In his government declaration before the state parliament, almost only a footnote on that day, he attacks the largest opposition party head-on. He accuses them of knowing everything better in Bavaria, but nowhere to do it better: “In all federal states that are worse off than Bavaria, the Greens are in the government.”

Greens * parliamentary group leader Ludwig Hartmann countered a few minutes later in the plenary debate just as gruffly. Söder did not have a viable strategy, acted “cocky”, shifted responsibility: “A complete self-abandonment of the government.”

Fire everywhere. And in between, Söder should also apologize. He too asks forgiveness for the back and forth about Easter. “Nothing actually happened,” he says, “but of course there is a fidelity.”

They assaulted the mayor of Mendoza: ‘We cannot be locked up and criminal gangs on the loose’