Copa América: between the problems at the Consulate in Rio and the euphoria of those who got their ticket to the final 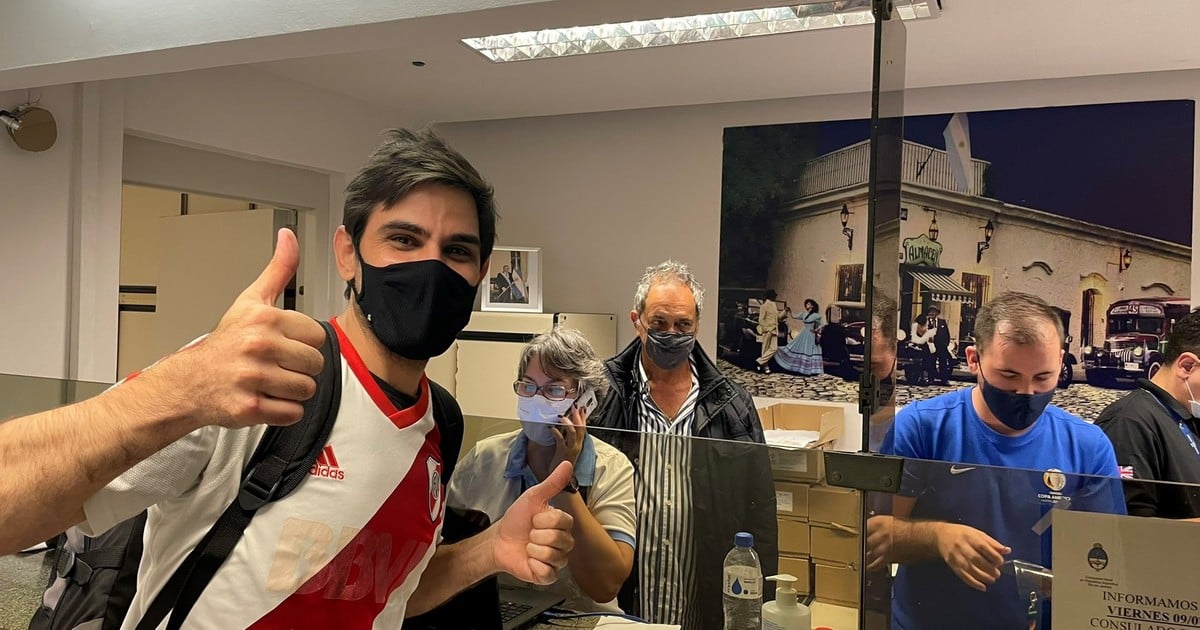 After Conmebol obtained authorization from the Prefecture of Rio de Janeiro so that this Saturday in the Argentina and Brazil final of the Copa América, there would be a 10% capacity, the search started for one of those precious 2,200 tickets. But the procedure was not easy and there were tensions in the Consulate, in which the documents had to be delivered.

While people went up to complete the paperwork and the others waited a lot, some in line explained that they were going to have to stay all night. So he started a little song: “Consulate, Consulate, we won’t tell you any more, if they don’t give the tickets, what a quilombo is going to be set up.”

The Argentine ambassador to Brazil, Daniel scioliHe argued that the process “takes time.” And he explained: “A laminated credential is given with the photo of whoever goes to the game and the identity is checked.”

A wine seller who lives 60 kilometers from Rio de Janeiro was the first to receive his entry. “Daniel Gonzalo Damore. Argentina”, reads the ticket that will give him entry to the final electrifying at the Maracana.

Dressed in the Albiceleste shirt, a red wine cap and a black sanitary mask, the 36-year-old man ran to get tested for covid-19 to get a ticket for the clash between Lionel Messi and Neymar at the Brazilian soccer temple.

From his native Argentina they warned him early on the authorization of the Rio de Janeiro mayor’s office to allow the entry of up to 10% of the maximum capacity of the legendary sports venue for the South American superclassic.

“The feeling is inexplicable because until a few hours ago there were no tickets,” he said excitedly outside the Argentine consulate in Rio, the point of delivery of tickets for fans of the two-time world champion.

“It’s a dream come true,” he added, almost in a tone of revenge because in the 2014 World Cup in Brazil he saw all the matches of Alejandro Sabella’s team from the stadium. minus the painful loss to Germany in the final in the same Maracana.

Dozens of people lined up since Friday afternoon at the Argentine diplomatic headquarters, in the traditional neighborhood of Botafogo, to obtain one of the income. Some were without a mask and others did not respect distancing.

To receive the pass, free, applicants had to show a negative PCR test for covid-19 and be Argentine residents in Brazil. The hosts and defending champions are also entitled to 2,200 innings.

“We came to get the tickets without being sure of having them. We got the PCRs in a matter of an hour, we solved everything between four friends, we grabbed the car and here we are … Just to see the final “, explains Jeremías, who works at an inn in Búzios, a tourist town about 175 kilometers from River.

“It is a privilege, when those opportunities come they should not be missed, we came with everything“said the young man, 28 years old.

The final will be the only match of the Copa América 2021 with an audience in the middle of a pandemic that has struck with special force to the Latin American giant.

Brazil, with 212 million inhabitants, it is the second country with the most deaths (more than 530,000) of the world, after the United States. The designation as host after the departures of the original venues, Argentina and Colombia, provoked strong criticism.

Specialists expressed concern for the slowness of the vaccination campaign, the spread of more aggressive variants of the virus and by the positions of President Jair Bolsonaro against the generalization of preventive measures, such as social confinement and the use of masks.

“At this point in the pandemic there is the solution, which is the vaccine, in such a stadium, like the Maracana, I do not see it badly “, considers Aaron Elías Jaramillo, a 25-year-old salesman.

At his side, the fans of Argentina paraded with albicelestes, Boca Juniors or River Plate shirts, and singing the traditional song that fuels the rivalry between Brazilians and Argentines: “Maradona it is bigger Than Pele “.

“A Copa América final, and against Brazil, is a dream, nothing else can happen,” said Juan Pablo, a 35-year-old master builder.