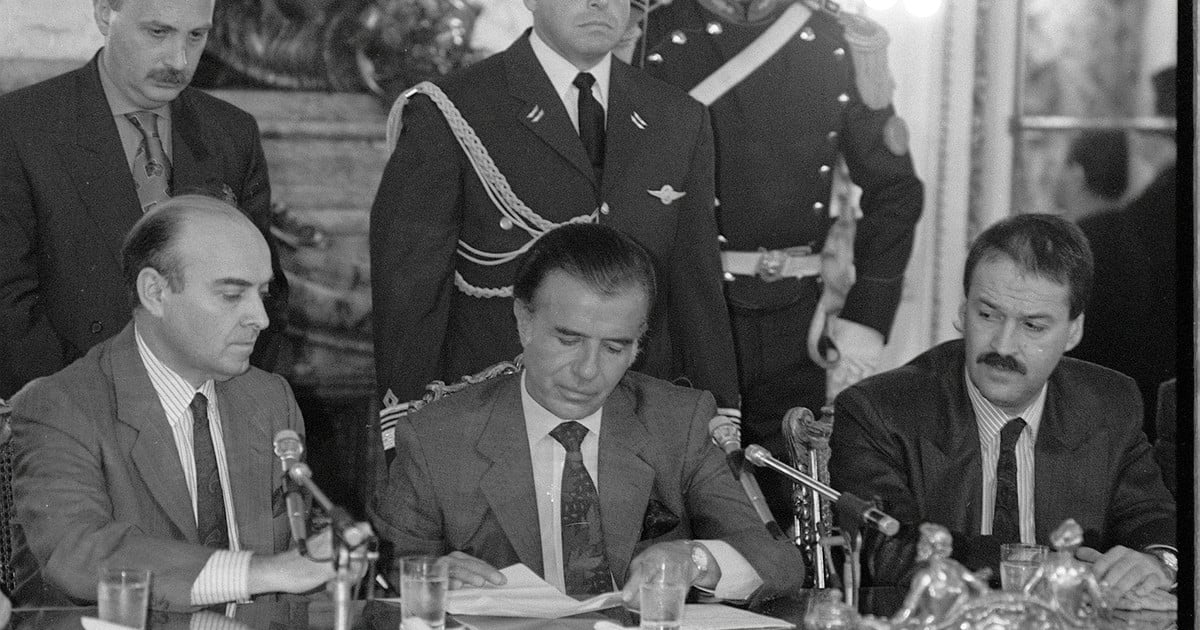 How to solve the demand for dollars in Argentina seems the mother of all battles. Based on this concern, the economist Andrés Wainer, researcher at Flacso and the University of Buenos Aires, compiled a series of essays that review the structural causes of the problem, stopping especially in recent years. Specifically on the 90s, the Conicet researcher Mariano A. Barrera points out: “The processes of privatization of State companies and the deregulation of markets that began with the first government of Carlos Menem (1989-1995) generated structural reforms in the economy. that altered the relationship between the State and civil society, and made possible a formidable increase in the returns on capital accumulation of the most concentrated fractions –national and foreign–, to which the energy sector was not alien ”. The document is entitled “The evolution of hydrocarbon policies and their results in the last two decades” and is part of Why are dollars always missing? The structural causes of the external restriction in the Argentine economy of the XXI century, compiled by Wainer and about which he spoke with Ñ.

On July 26, 1996, Domingo Cavallo resigned as Minister of Economy.

– One of the main causes of the demand for dollars has been the need to import capital goods: Were the conditions of our productive structure ever given to replace them?

–The Argentine industry never managed to produce the bulk of the capital goods that it needed for its operation. By the beginning of the 1970s, some relevant progress had been made, but with trade liberalization, financial liberalization and the increase in interest rates promoted by the dictatorship, this process broke down, and with Menem’s structural reforms in the decade 1990 and the Convertibility Law was finished deepening. It became increasingly dependent on imports, not only on capital goods but also on intermediate goods and final consumption.

– Only for that reason are dollars missing in Argentina?

– This is a central question because it is at the root of most of the crises that Argentina has suffered since the middle of the last century, although the causes of the problem have varied over the decades.

–And while before the last civic-military dictatorship the lack of dollars was fundamentally associated with an industrial expansion that demanded increasing imports that could not be compensated with exports, after the reforms of former minister José Alfredo Martínez de Hoz it takes on such importance or more relevant the outflow of foreign currency through financial means, especially through the payment of foreign debt and capital flight.

– Some readings tend to suggest a certain analogy between the government of Néstor Kirchner and the first Peronism, as two moments of sustained boom in an expansion of demand from the foreign market that was immediately translated into the balance of payments. If this was so, what went wrong, what could not be reversed?

– The first Peronism had a favorable international situation in terms of external demand, but when postwar Europe began to recover this changed and in 1952 it encountered a typical balance of payments crisis. Although the government of Néstor Kirchner started from an unprecedented economic crisis, it also found itself in a favorable international context due to the increase in commodity prices. This allowed the recovery of industrial activity to be accompanied by a significant inflow of foreign exchange from exports. But, despite growing at high rates, the inherited industrial structure was not substantially transformed, which is observed, for example, in the gradual reduction of the trade surplus that the industrial sector had obtained from 2002 until its disappearance in 2007.

In 2012, supporters of President Cristina Fernández de Kirchner listened to her speech at the inauguration of a YPF Gasoil Hydrotreating plant. EFE / Leo La Valle.

–In the book, they just stop in the period after 2008. In Argentina there is a growth cycle between 2010 and 2011. Why was it not possible to capitalize?

–Some measures taken by the Cristina Fernández government, such as the re-nationalization of the pension system and other policies to assist the productive sector (such as REPRO), made it possible to weather the international crisis relatively well and recover growth. But the problems in the external sector began to intensify rapidly. On the one hand, the remittance of profits made by transnational companies based in the country accelerated and capital flight soared. On the other, as shown in Mariano Barrera’s chapter, a key issue was the energy issue.

–Economic growth was concomitant with a drop in the country’s energy generation that had to be offset by increasing imports from the model inherited from the 1990s. In this way, the country went from being a net exporter of energy to a net importer from 2011. Everything made the exit of dollars from the Argentine economy accelerate and the country began to lose international reserves. This worsens at the end of 2012, when the international prices of the country’s main export products begin to decline.

–One of the main problems is effectively the flight of capital. Is there a solution outside of state regulation or restrictive measures?

–The main problem that originates the flight is not so much that the levels of profitability in the Argentine economy are always lower than those of other countries, but that there are few sectors to reinvest the surpluses. Bubbles were created at various times but, far from solving the problem, they have aggravated it. For example, profitability in privatized firms during the 1990s was much higher here than in the country of origin of those they bought. However, it was a business limited to a few large capitals and, in addition, a part of the local economic groups that participated in the business later sold their shares making large capital gains that ended up mostly escapes, and those who stayed with the business they were transnational companies that remitted most of their profits to their countries of origin. Another niche with high returns both in the 1990s and during the Macri government were financial investments, with the local interest rate being higher than that of the main financial centers of the world. But the problem with this type of investment, mostly of a speculative nature, in addition to the fact that it does not expand productive capacity or contribute to generating employment, is that it is very easily reversed in the face of any element that is perceived as a change. The regulations for these movements seek to reduce this volatility, but they do not generate investment attractions per se.

– And how did the financial profitability operate during Macri’s management?

–This is a typical operation of the “financial valuation” schemes in which a high profitability is guaranteed based on an internal interest rate that exceeds the international rate, discounting the variations in the exchange rate. In this way, speculative capital enters but the condition for that income is that its “exit” is guaranteed, that is, that they can freely dispose of the dollars to withdraw their financial investments whenever they wish. What the macrismo did, like the last dictatorship and also the Menemism, is to guarantee the dollars to finance that exit through external indebtedness. That is, as clearly seen in the chapter by Leandro Bona and Mariano Barrera, it was a foreign currency debt that did not have the objective of generating projects that generate repayment conditions for that debt – for example, investing in infrastructure works, a higher income from tourism or import substitution projects – but to finance current expenses of the State –which are in pesos- and guarantee the dollars to sustain the financial valuation scheme.

President Mauricio Macri arrives at the government house in Buenos Aires, Argentina, on Monday, September 2, 2019. The Argentine government decreed on Sunday that Argentines will need authorization from the central bank to buy US dollars. (AP Photo / Natacha Pisarenko)

–According to one of the essays in the book, when the government of Nestor Kirchner pays the debt, the financing of the flight is suspended but not closed. What does it mean?

–In effect, as I said, the flight began to intensify as of 2007. Above all with the irruption of the international crisis and the conflict with the agricultural employers in 2008. However, unlike what happened in the aforementioned schemes of “ financial appreciation ”, this flight was not financed with external debt but was settled with the dollars obtained through the trade surplus, that is, with exports. The effect of the flight is equally pernicious since they are resources that leave the system, but in that case it was financed through a genuine source that does not imply a greater subsequent outflow, as happens with the debt that, in addition to the capital owed, generates a flow of constant interest payments.

–In this context, what are the challenges that Alberto Fernández faces? To return to the terms of the beginning: where can you get dollars from?

–The challenges are multiple, starting with the effects of the “second wave” of the pandemic. One of them is the current management’s difficulties in accumulating international reserves despite having a trade surplus. Given that Argentina is virtually excluded from international financial markets, at least until an agreement is reached with the IMF, and the complex world scenario makes it difficult for foreign investments to increase significantly in the immediate term, almost the only source that has the government is through foreign trade. The challenge then is enormous because as the Argentine economy continues to recover, the demand for dollars for imports will also increase.. Now, as what we export are goods that make up the basket, this same increase in international prices tends to raise food prices in the domestic market, which has a direct impact on the levels of poverty and indigence. In this sense, Argentina is in a dilemma, since the recovery of the productive apparatus requires the dollars that come in from agricultural exports but at the same time it is required that prices in the domestic market do not increase. It seems to me that in the short term this can only be solved, at least partially, with instruments that seek to decouple domestic prices from international ones, such as withholdings. But, in the long term, the only alternative so that Argentina does not repeatedly fall into the scarcity trap is to achieve a structural change that encourages investment in new activities and increases productivity in existing ones, improving the level of employment and the salaries.