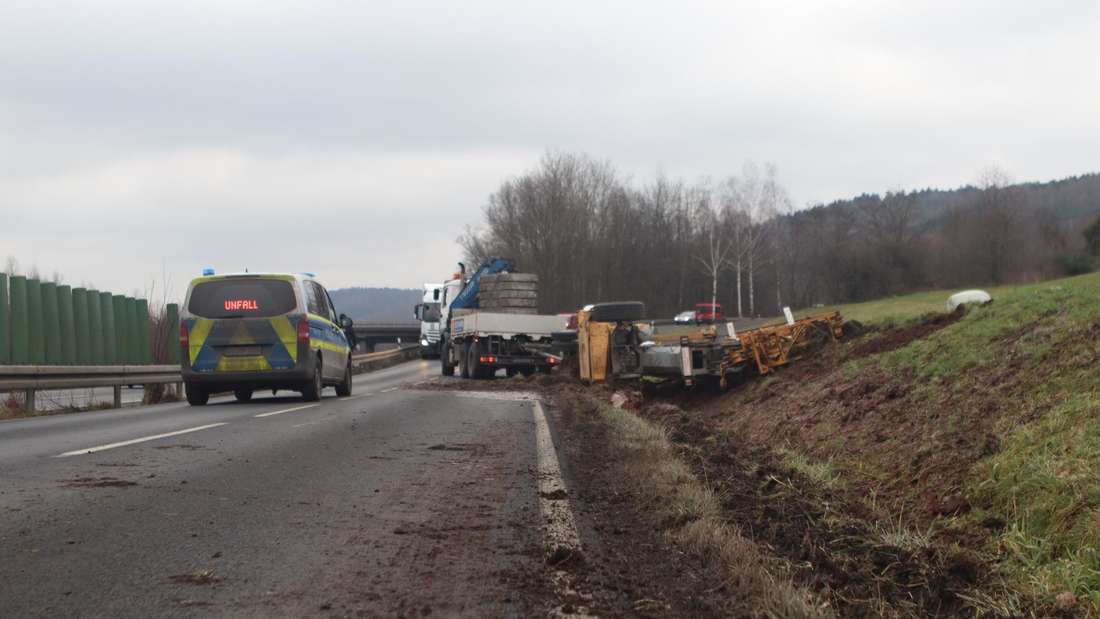 For hours, a construction company near Gelnhausen near Hanau tried to rescue their accident-crane crane on their own – until professional help finally arrived.

Gelnhausen – Between Altenhaßlau and Gelnhausen in the Main-Kinzig district, around 30 kilometers north-east of Hanau*, there was a lot for walkers to see on Wednesday (01/19/2022). For reasons that have not yet been clarified, a construction crane that was being pulled by a truck slipped into a ditch on district road K898 around 2:30 p.m. and tipped to the side.

But when the police arrived at the scene of the accident, the officials found the truck with the door open, a spokesman said when asked by our editorial team. The key was in, the engine was running, but there was no sign of the driver. Apparently, the fugitive had at least informed his employer about the accident, because a short time later employees from the company came to the scene of the accident. But not the one who put the crane in the ditch, at least that’s what the police suspect.

See also  Mandatory day off after Ascension: 'Right to take time off rests with employee'

Accident near Gelnhausen near Hanau: The company wants to salvage the crane itself – and fails

To save costs, the company wanted to salvage the construction crane itself. The police blocked the road – then it should start. However, eyewitnesses reported rather “adventurous salvage attempts”. When the crane was still in the ditch about an hour and a half after the accident, the police finally ordered another company to carry out the salvage. A mobile truck-mounted crane moved in and lifted the overturned construction crane out of the ditch by evening.

According to the agency 5vision.media, individual drivers have meanwhile tried to avoid the full closure of the K898 near Gelnhausen in the Main-Kinzig district by switching to a parallel cycle path. The police have not confirmed this information to date.

Gelnhausen near Hanau: the police are looking for witnesses to escape from the accident

After many hours of full closure, the officials finally released the district road again in the early evening. They also opened an investigation into a hit and run. Since the investigators already have a suspect in their sights, they are now looking for witnesses who can describe the driver of the truck as precisely as possible. After initial investigations, the police suspect that the alleged driver could be a 33-year-old man from Reichelsheim (Wetteraukreis). The Gelnhausen police station takes tips on telephone number 06051/827-0. According to the police, the accident resulted in damage of around 12,000 euros. (iwe)

A while ago there was one curious accident near Hanau in the Main-Kinzig district*. During a pee break on the hard shoulder, the outer wall of a mobile home is torn open. Drugs are strewn by the kilo on the freeway. *op-online.de is an offer from IPPEN.MEDIA.