Companies The Pool familiar from Helsinki is spreading to the world: Your own Pool will be made in Stockholm, Oulu, Turku, Espoo and soon maybe also in New York 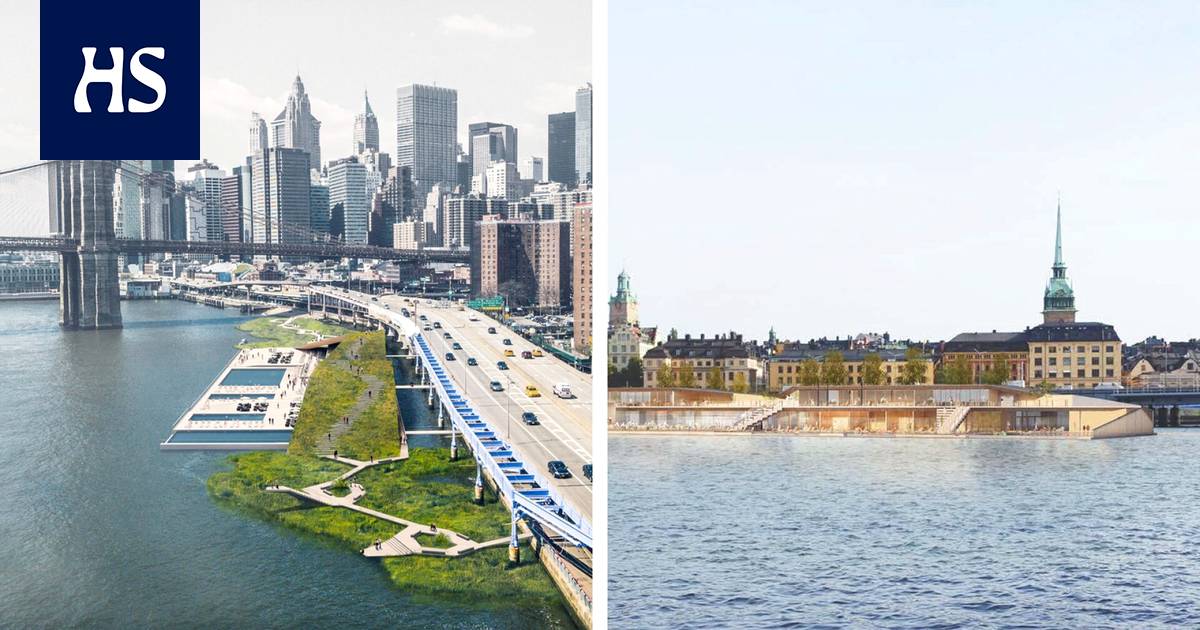 Led by Raoul Grünstein, Nordic Urban is the second of two finalists in a concept competition where New York is looking for an operator and builder for Manhattan to build a water-based spa next to Brooklyn Bridge.

Helsinki The Pool Sea Pool project, known from the market square, is spreading around the world. The entrepreneur behind the project Raoul Grünstein tells HS that the Pool Sea Pool will soon be implemented in Stockholm, Turku and Oulu.

If things go according to Grünstein’s wishes, his own Pool project will soon be done in New York as well. The pool has been operating in Helsinki since September 2016.

Grünstein According to him, the projects that are being confirmed are now Oulu, Turku, Espoo and Stockholm.

“I count as confirmed projects those where we have a building permit or a design reservation, ”says Grünstein.

In addition to these, Nordic Urban, which develops pool centers, is working on 15 projects around the world, including Oslo, Gothenburg, Dublin, Tallinn, Brussels, Hamburg and Antwerp, Grünstein says.

They are often event and concert centers with a restaurant and various swimming pools.

“In a sense, they all have the same concept. Is hubi [keskus] and many different activities. But the heart is always in the spa and wellbeing that is, in various welfare services. ”

An illustration of the Pool project planned for Stockholm. Picture: Pool Nordic Urban

Helsinki In the pool, one such popular wellbeing product, at least before the corona pandemic, was called “wine and stretching”.

He says the waiters bring glasses of wine to the stretchers after more than an hour of training.

According to various trend studies, there is an increasing demand for such holistic well-being experiences.

Cities have been interested in waterfront spas in recent years.

According to Grünstein, the enthusiasm of the cities is based on the combination of three simultaneous trends.

First of all, like in Helsinki and Oulu, many cities are concerned about the vitality of downtown areas, Grünstein says.

Therefore, it is desired to enliven the centers, even with spas.

Cities they also want to make better use of their water borders, Grünstein says.

When port operations are relocated away from downtown beaches in many cities, city policymakers often wonder how vacated beaches and waters could be used as recreational areas for residents.

Taking the facilities “back” for the use of the townspeople fits the election promises of many politicians. The business community is also often excited when there are good vantage points for recreational use in the city’s parade grounds.

“The third point of interest is the general good life, wellbeingin rise, that is, the importance of fitness and well-being in a broader sense, ”Grünstein explains.

The Stockholm Pool project rises next to Gamla Stan. An illustration of the Pool project planned for Stockholm. Picture: Pool Nordic Urban

According to Grünstein, Nordic Urban is Developer – operator that is, the property developer and the operator of the centers ’operations. It rents out restaurant operations to external restaurateurs, but other operations are the responsibility of the company.

In addition to planning and negotiations with the cities, the development of the project includes Nordic Urban looking for a developer and owner for the property, who will lease the premises for Nordin Urban’s use for a fixed period of time.

“We are selling the project to real estate companies and the real estate funds that will become their owners,” Grünstein says.

Buildings the funds that become owners require an annual return of about 5-7% on their investments, Grünstein says.

Nordic Urban typically sells the project it develops to a real estate fund at a purchase price of about 10 percent of the total investment value.

Prior to that, it had been purchasing expert services from architectural and consulting firms for years.

“In New York, three offices are collaborating with us. In almost ten cities, an office represents us. Cooperation also includes lobbying and networking. ”

Development work has largely been done with Business Finland’s RDI loans and other loan financing, but next autumn the intention is to raise additional financing from a private equity investor, Grünstein says.

The company is now owned by a number of private investors. Grünstein’s share of the company is more than half.

An illustration of a Pool project planned for New York. When completed, the project would be right next to the Brooklyn Bridge. Picture: Pool Nordic Urban

In Oulu, the lease period with options extends to 60 years.

The first Allas Sea Pool built in Helsinki initially had a city permit for only eight years of space lease.

Because of that, the Helsinki Pool also had to be built cheaper and easier to move to a new location than new properties, Grünstein admits.

“The space program with changing rooms, lobbies and wind cabinets has been better solved in the new versions,” Grünstein promises.

“Once our business model determines space needs, we can tell the architect what we’re doing.”

In Helsinki The pool has been a profitable business at least before the coronavirus pandemic. Net sales in 2019 were almost seven million euros.

Back in 2017, turnover was about three million.

Between 2017 and 2019, the pool’s operating profit rose from virtually zero to more than half a million euros, Grünstein says.

It is reported that the Building Board will make a decision on the building permit on Tuesday, June 22nd.

Grünstein says he is waiting for the final investment decision for the Oulu project next week.

New York The pool center is by far the largest construction project worth about 50 million euros, Grünstein says.

Nordic Urban participated in a concept competition where the city was looking for an operator and builder for Manhattan between Brooklyn Bridge and Manhattan Bridge for a spa to be built on the water.

“The New York proposal specializes in floating green space, which is both a biological treatment plant and a walking trail.”

Nordic Urban left for the New York tender from behind.

Grünstein says he received a Whatsapp message in October from a late board member of Nordic Urban From Ami Hasan just before the start of a theatrical performance.

Hasan had noticed a story in The New York Times about the city of New York launching a tender for the construction of a swimming pool a few months earlier.

“It started spinning in the mind. It took three and a half weeks to submit the competition entries, ”says Grünstein.

“The next night went in a pretty restless mood. We talked about it the next day at the office and decided to attend. ”

Next, Grünstein moved to New York for three and a half weeks.

Time was spent building the local group at the same time as three different teams in Helsinki were preparing plans.

“They were somewhat behind the tree that the Finnish company had also offered. Now we have a weekly meeting with the New York authorities to promote the project. ”

Grünstein says Nordic Urban received permission from the New York City Council for Economic Development (EDC) this week to announce that the city has selected Nordic Urban ‘s proposal as the second of two finalists.

The spas of Oulu, Turku, Stockholm and New York are designed by an architect known especially for wooden construction. Anssi Lassilan and designed by Oopea Architects.

An observation image of a green roof at a New York spa. Picture: Opera / Nordic Urban