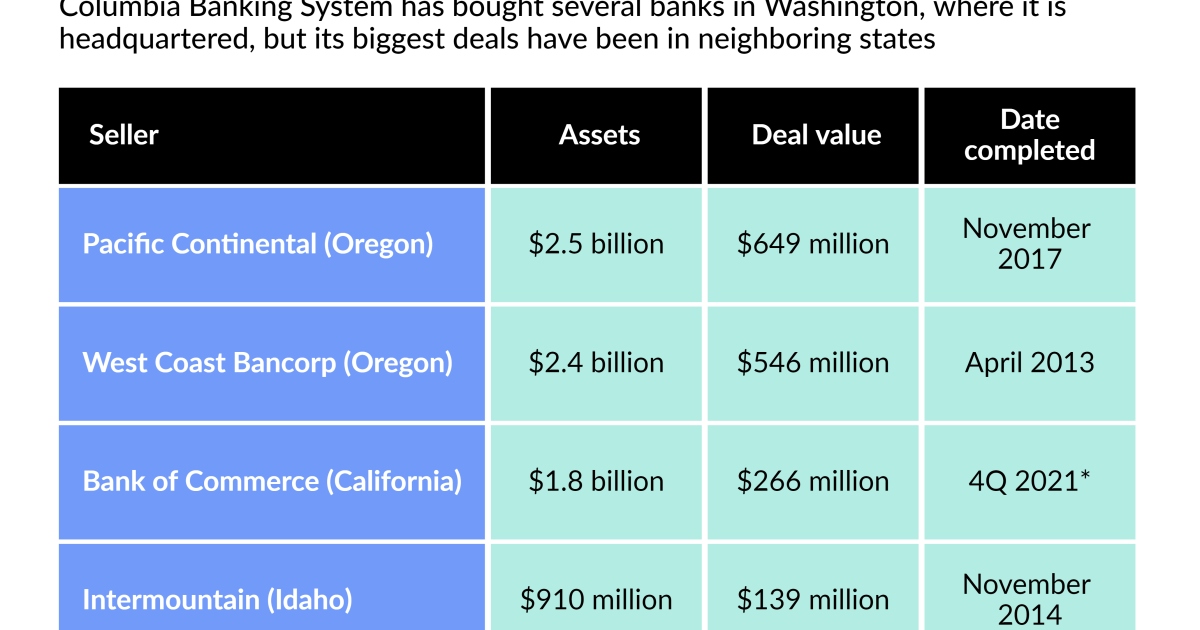 Columbia Banking System’s purchase of Bank of Commerce Holdings in Sacramento, California, doesn’t fill a gap in its footprint – it creates one. And filling that gap will be a priority for future acquisitions, its CEO said Thursday.

Columbia is based in Tacoma, Washington, and its branch network extends south to Eugene, Oregon, and east into Idaho. When its $ 266 million deal of the $ 1.8 billion-asset Bank of Commerce is completed, its closest California branch will be over 200 miles from Eugene, in Yreka, California.

“We think over time you’re going to see that continuity, and there won’t be any gap,” said Clint Stein, Columbia’s CEO, said in a Thursday conference call with analysts. “More to come on that later.”

Stein added that over the years, Columbia has occasionally done multiple deals in close proximity. He stopped short of saying another announcement was imminent but added that the company still has bandwidth to do more M&A.

“We’re not singularly focused on California. There are some things that we can do adjacent to the existing footprint. It’s an intriguing time as we continue to explore what’s out there, ”Stein said.

The Rocky Mountain states also could be the site of more deals for Columbia. Stein said many of the markets in those states have similar features to the bank’s legacy region of Washington and Oregon. “I still think there are opportunities to the east and the southeast,” he said.

This will be Columbia’s 12th acquisition since 2007, and the first since it bought Pacific Continental in Eugene in 2017.

Stein took over as CEO a year and a half ago. Prior to that, Hadley Robbins spent three years at Columbia’s helm after its previous CEO, Melanie Dressel, unexpectedly died in February 2017. Robbins steered clear of acquisitions during that time.

Stein said California has been of interest for several years and called it a natural extension to the bank’s footprint. He pointed out that the state has the fifth-largest economy in the world.

“This acquisition is going to unlock numerous opportunities for us to accelerate our growth trajectory both organically and through additional acquisitions,” he said.

Bank of Commerce CEO Randy Eslick will lead the new California division and hold the title of president. On the call, he said northern California is experiencing tremendous growth stemming from factors including its strong economy and a diverse mix of employers, which include technology and healthcare companies.

Sacramento in particular has seen a recent influx of new residents from the Bay area and has ranked among the top migration destinations in the US for homebuyers looking to relocate, he said.

Stein said Columbia found some potential partners that ultimately turned out not to be good fits through its deal conversations in California but added that there is “meaningful opportunity” in the Golden State.

“Over the next three to five years and beyond… we’re going to be able to leverage that and have a pretty significant impact on our overall position,” he said. “I see, on a relative basis, much greater opportunities in California (than in Oregon),” he said.

“With [Columbia] now having a strong foundation in the Golden State, we would expect it could bolt on additional smaller tuck-in transactions over time, expanding its presence further along the I-5 corridor [a highway that runs along the West Coast of the U.S.] both organically and through bolt-on M&A, ”the analyst wrote in a note to clients.

Feaster also said that culture is often an overlooked aspect of M&A, and he believes the two institutions are very much aligned, “which should allow for a quick and seamless integration.”