Colombia: the cemetery where the horror of the ‘false positives’ during the internal war is relived 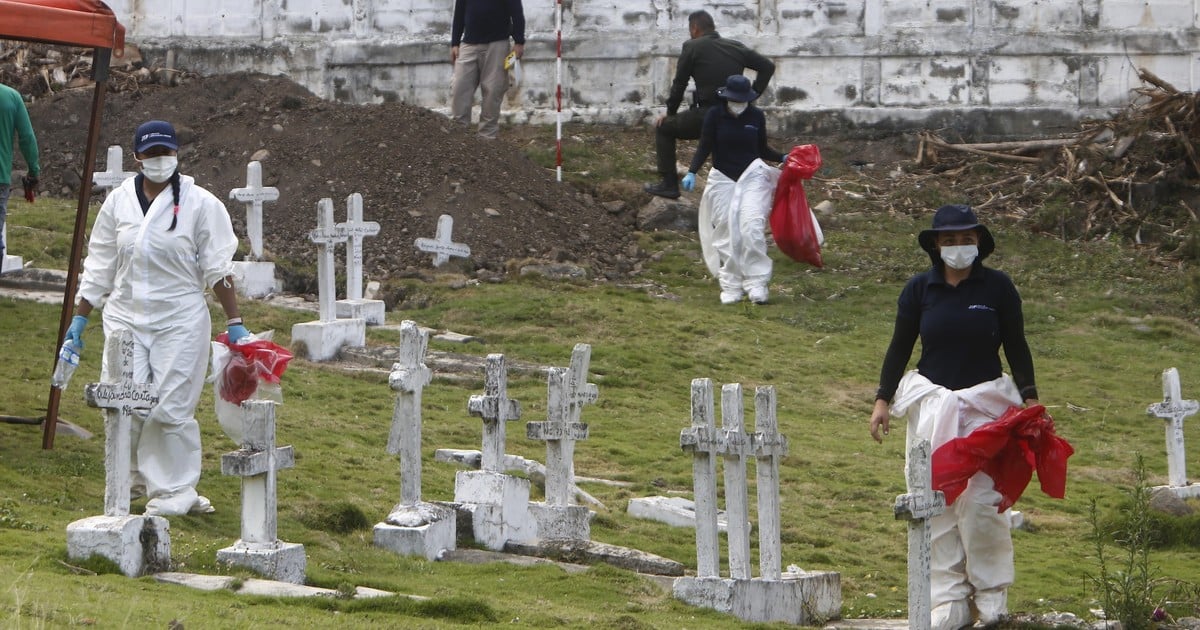 With a shovel, Jaime de Jesús Arango removes more than dirt in the Las Mercedes cemetery. When he picks up small amounts of material, he shakes up one of the darkest chapters of the armed conflict in Colombia, while trying to find part of the truth about “false positives.”

His work as a gravedigger in this cemetery in the municipality of Dabeiba, in the department of Antioquia (northwest), varies during the proceedings carried out by the Special Jurisdiction for Peace (JEP), which in December 2019 began several excavations there after receiving statements from members of the Army who recognized having participated in these extrajudicial executions and they revealed the place of the graves.

“It is a different job; there is no relative here and it is not known where the bereaved (deceased) was left,” Arango tells Efe, during the fourth day of exhumations and search for “false positives”, young people, especially from humble areas, taken by the Army under promises of work and executed to be presented as guerrillas to their superiors, and thus obtain permits, awards and other benefits.

A forensic expert from the Investigation and Accusation Unit (UIA) of the Special Jurisdiction for Peace. Photo EFE

Arango explains that he and eleven other people, most of them residents of Dabeiba, dedicate themselves to excavating at points indicated by the forensics of the Investigation and Accusation Unit (UIA) of the JEP in that cemetery that has been turned into a huge mass grave. This is shown by the chilling findings: 80 bodies have been recovered so far.

This squad of workers, dressed in green, with picks, shovels and wheelbarrows, receives the signal and enters to remove or cover, in a teamwork made up of three forensic experts -anthropologist, dentist and psychologist-, a surveyor, a photographer, a prosecutor and some magistrates.

“People ask, but you can’t say anything; we don’t know anything about (the identity of the) bodies because that does not belong to us. We do not know how many bodies are in each grave, “says the gravedigger, while a drone prowls taking aerial images to register the graves and create a 3D map of the cemetery.

A risen Christ, angels and a cross welcome visitors to this town. A chapel in the middle, small crosses scattered, pale tombstones and other colorful ones, flowers … All common elements of a cemetery until yellow ribbons and staff dressed in white appear moving by areas delimited with tweezers, brushes and other tools.

In this gloomy scene, houses that hang from a steep hillside stand out in the background. From there they watch some neighbors and vallenata music plays at full volume as if it were a sabotage to the rigorous judicial work.

The same soundtrack that accompanied the delivery of the remains, in February 2020, of the first identified victim: Edison Alexander Lezcano Hurtado, a peasant and father of three children who He was 23 years old in 2002 when he was assassinated by the Army.

Forensic experts from the Investigation and Indictment Unit (UIA) of the Special Jurisdiction for Peace (JEP) exhume a body. Photo EFE

During the first proceedings in Dabeiba, Legal Medicine experts took 150 DNA samples and conducted interviews to compare the information with the exhumed bodies. This process of collecting genetic material was key to the identification and delivery of five victims to their families.

In one of the graves found, 18 small green and orange flags stand out. Some indicate remains with a “normal funerary context”, while the others mark, according to the evaluation of forensics, which does not correspond to a burial made by a family. There is no shroud, coffin remnants, or lace.

In the fourth forensic procedure, carried out between March 6 and 13, the forensics found the remains of nine people, which are added to the 80 bodies recovered in this cemetery in Antioquia. for 15 months inspection, as part of Case 3 of the JEP.

On this occasion, they found a camouflage pants next to the exhumed remains. In another grave, the finding included a military cap together with the remains of a possible “false positive”, which lay on a legal burial, in which a body is seen in better condition and with clothes.

Forensic experts from the Investigation and Accusation Unit (UIA) of the Special Jurisdiction for Peace (JEP) transfer elements and bone remains in bags. Photo EFE

During its work, the JEP found bodies in black bags, naked, with gunshot wounds to the head, totally fragmented. Some appear with military garments and others, tied hands, feet and neck, in a state of total defenselessness.

“The patterns are repeating,” says JEP magistrate Alejandro Ramelli, who ordered the exhumations in Las Mercedes when a soldier revealed his participation in illegal burials in Dabeiba. He opened a “Pandora’s Box”.

The JEP, created by the 2016 peace agreement with the FARC to investigate crimes committed during more than 50 years of armed conflict, raised the number of “false positives” to 6,402 in February, concentrating the majority of executions between 2002 and 2008, the years in which Alvaro Uribe was president.

“There is an unacceptable macrocriminal phenomenon,” says the robed.

“The Gate of Urabá”As Dabeiba is called, it is one of the territories where the war did not show mercy to any of its protagonists. “If there is an emblematic site of the armed conflict, it is Dabeiba,” says Ramelli.

Located on the edge of the strategic agroindustrial region of Urabá, several fronts of the José María Córdova Bloc of the FARC operated there, fighting for control of those territories with paramilitaries and the Army.

Despite these traces of the war, the mayor of Dabeiba, Leyton Urrego, hopes that they will not be stigmatized nor made visible only by the graves and violence. He wants them to be remembered as a “peaceful people who do not seek revenge”, but “want to know the truth.”

For this reason, at the entrance of the municipal palace it reads “haven of peace”, to inspire a land of peasants -with a great indigenous presence-, which is self-sufficient with crops of corn, beans, coffee, cocoa and fruit trees.

The main park of the municipality of Dabeiba on March 11, 2021, department of Antioquia (Colombia). Photo EFE

While the JEP searches for answers in Las Mercedes, children play on their bicycles in the main park of a territory where they currently live ex-guerrillas of the FARC, ex-paramilitaries, Afro and indigenous population, but especially, victims.

“We forgive, but it is very difficult to forget”, the mayor tells EFE, and relates that the guerrillas not only shot him years ago, but also murdered his brother and the mother of his children.

For Urrego, the discovery of the bodies of possible victims of “false positives” constitutes the “beginning of a truth”, but stresses that the investigations should not stop in Dabeiba.

“There is hope that other sites that are whispered loudly that exist can also be touched,” says Urrego, and says that the current diligence “is possibly the last.” He also hopes that Forensic Medicine can fully identify the recovered remains.

Father Carlos Arturo Sánchez, recently appointed parish priest of the church in charge of the administration of the cemetery, comes to snoop around the excavations.

“We must catechize the population so that it is not buried in the earth again when victims of the conflict appear “, proposes the priest.

Sánchez describes the JEP’s interventions as a “great and admirable work” that once finished will allow a “process of forgiveness and reconciliation” to begin between a community that “remains united”, despite the violence.

Thirty minors find a family thanks to adoption programs