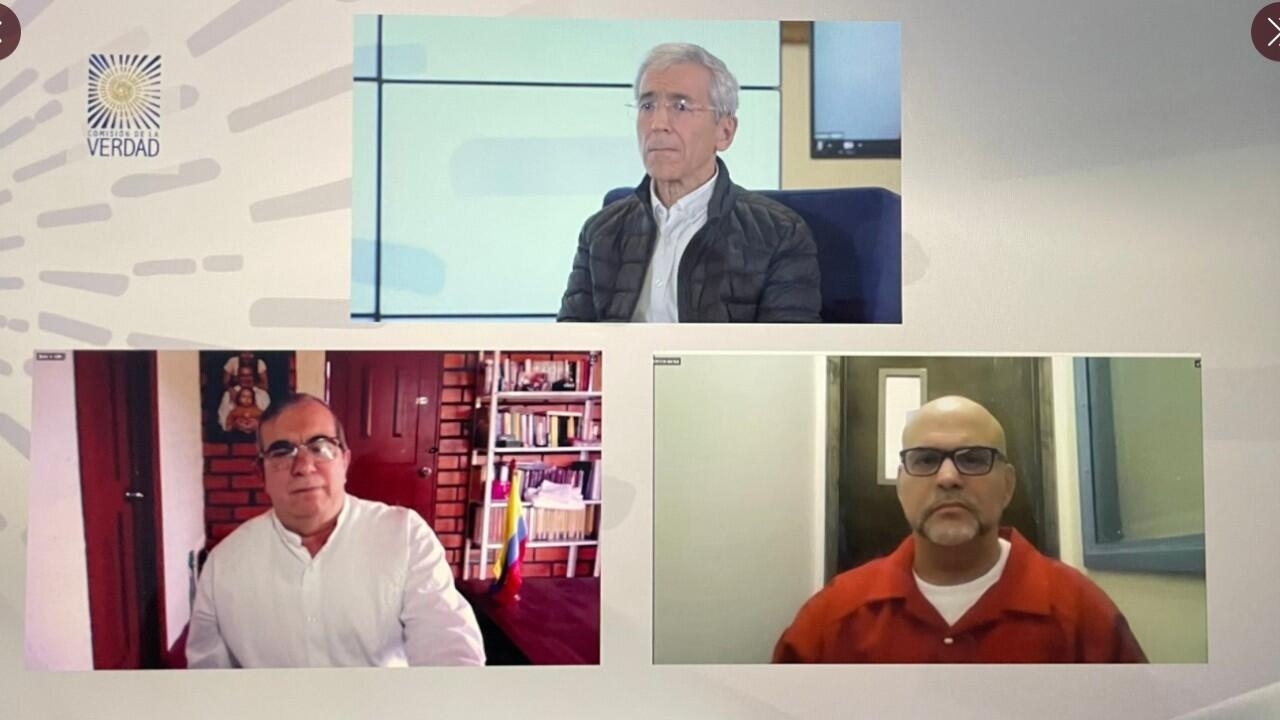 The former paramilitary leader and the former commander of the former FARC guerrilla held a videoconference talk with the director of the Truth Commission, Francisco de Roux, to lay the foundations for their meeting with this body, which seeks to clarify what happened in Colombia during the armed conflict.

Former paramilitary Salvatore Mancuso and former FARC commander Rodrigo Londoño, alias ‘Timochenko’, held a virtual meeting to lay the foundations for what will be future meetings within the framework of the Truth Commission on the armed conflict in Colombia.

Those who were once protagonists and counterparts of one of the bloodiest conflicts in the history of Latin America met for the first time this Thursday at their own request to discuss how the meeting scheduled for next April 21 will be, where they will recognize their responsibility for crimes committed during the conflict.

The Truth Commission is a body created as a result of the Peace Agreement signed between the Colombian Government and the then FARC to clarify the facts of the conflict.

“We have agreed that the first comprehensive meeting with the truth, with the victims and other perpetrators, and with the media and the international community, will be held on April 21. We are waiting for you there,” said the Jesuit priest and director of the Commission. Francisco De Roux.

This meeting aims to shed light on the many questions that the families of thousands of victims still have and to clarify that people also participated in certain events during that time.

#ATTENTION
We installed the route for the contribution to the truth together with Salvatore Mancuso before the Truth Commission.

On March 21 we will begin our contribution to the truth so that the country knows many of the realities of the conflict that have remained hidden. pic.twitter.com/kMe4UgpVwh

Intent to clarify decades of conflict

Londoño assured that being in this space is one of the issues that were discussed since the negotiation of the Peace Agreement in Cuba, when it was raised how the truth would be told to the victims and to the Colombians.

“We have assumed the responsibility that corresponds to us and we will assume what the Special Jurisdiction of Peace tells us. Far is it up to us to defend the horrors of war. The right to rebellion is not a patent of marque to carry out war crimes or not to assume our responsibilities ”, Londoño assumed.

Rodrigo Londoño is currently the leader of the Comunes political party, heir to the extinct FARC guerrilla, and asked that other actors in the conflict take part in the meetings scheduled for April, such as Jhoverman Sánchez, alias Rubén Cano; Félix Antonio Muñoz, known as Pastor Alape, and even Héctor Germán Buitrago, alias Martín Llanos, who together with his family founded the Self-Defense Forces Peasants of Casanare (ACC). “We have come to this space with the sincere desire to contribute to the truth and thus be able to reconcile,” added Londoño.

We raised the right to rebellion against the state of injustice in Colombia, but that was not obvious to commit the errors and the effects on the civilian population. That is why we ask for forgiveness and we ratify that we are at the disposal of the victims, the truth and peace. pic.twitter.com/3JEfky1Vbs

For his part, Salvatore Mancuso, one of the most important figures within the Colombian paramilitarism, established a connection from his prison in a prison in Georgia, United States. There he has been serving a sentence for drug trafficking, after he was extradited by the Colombian government in 2008.

Mancuso was one of the leaders of the United Self-Defense Forces of Colombia (AUC), a group attributed to hundreds of massacres throughout the country and which was the FARC guerrilla’s greatest enemy. Mancuso assured that they want to “dignify the victims, accept responsibilities and seek conciliation and coexistence in the country.”

Mancuso assured that the country “knows only a part of the truth of the conflict” and that is why it is necessary for the other actors “to show who was behind it and who was responsible.” For this, the former paramilitary assured that “a peace process that links the armed actors is necessary.”

Almost a year ago, the United States notified Colombia that Mancuso had already served his sentence for drug trafficking in the country and that he would be released. Given this, the Colombian Government requested his extradition for the debts he has pending in this country, although Mancuso requested to go to Italy because he has dual nationality.

During the talk, Francisco de Roux assured that the objective of the Truth Commission “is not to be a trial”, but a space in which the truth can be discovered and added that “this scenario is not and cannot be to glorify itself as actors of war, but to show the immense debt that you and all the other actors in the conflict, the State and the Colombians have with the victims. “

April 21 will be the first time that two prominent former members of the two main armed groups in the country and those with the most victims in their history will speak at the Truth Commission. An important step at a time when the peace agreed in Colombia languishes due to the episodes of increasing violence between armed groups and the State that have occurred in the country in recent months.