Colombia: atypical Independence Day with protests against the Government of Iván Duque 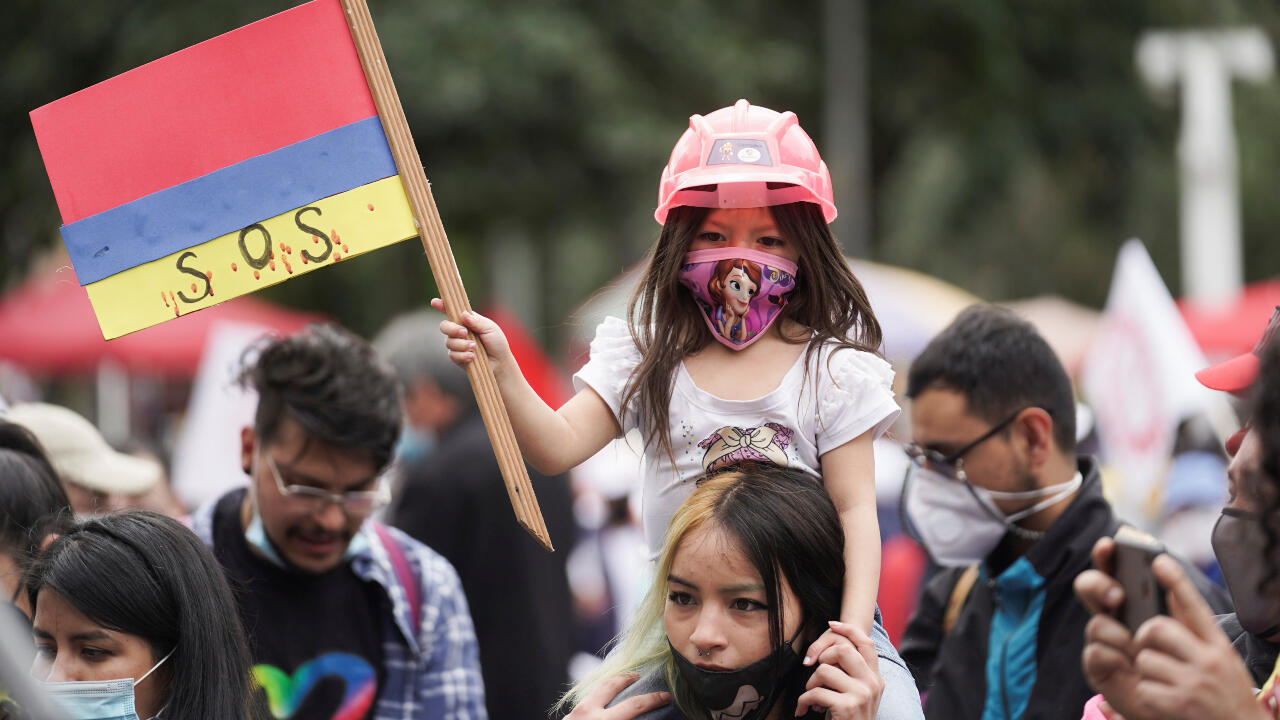 The demonstrations against the conservative Iván Duque were present since the morning, in Congress, where the last legislature of the four-year term was installed, and they spread throughout the capital and the rest of the country. Before the Legislature, the organizers of the marches presented ten bills based on citizen claims. Meanwhile, the Government presented a new tax reform and a police one.

Dressed in construction helmets, goggles and masks, a handful of opposition leaders attended this Tuesday, July 20, the installation of the last legislature of the Congress of the Republic of Colombia. The date marks Independence Day and, by tradition, the event in the Legislative is usually held in the afternoon, but this year the call for protest changed the usual agenda.

Both before Congress, and in other parts of the capital, Bogotá, multiple demonstrations were held, such as sit-ins, mobilizations and artistic and musical events, which took place mainly in a peaceful manner, although since mid-afternoon there were clashes between protesters and police in some points.

On this Independence Day, the call to protest was also felt in other cities, such as Cali, Medellín, Barranquilla, Popayán, Bucaramanga or Cartagena, where throughout the day, acts of vindication against the Government were carried out, peaceful in its vast majority. However, in the afternoon some altercations began to take place between protesters and agents of the Mobile Anti-Riot Squad, ESMAD, in some of these acts.

The day had been called as a continuation of the protests of the National Strike, which began on April 28, in which thousands of citizens took to the streets in different cities of the country to express their discontent against the neoliberal policies of the Duque government. The April outbreak was in turn for many a resumption of the November 2019 demonstrations, whose discontent accumulated during a pandemic year.

The April National Strike arose in response to the tax reform proposal presented by the Duque Government, which the same Executive withdrew a few days later. But by then the protesters’ motives had already multiplied. The excessive police response, which was corroborated weeks later by the Inter-American Commission on Human Rights (IACHR), as well as another list of reforms and Duque’s reluctance to dialogue with his detractors triggered more discontent.

After a few weeks of pause, the National Unemployment Committee, which only represents a portion of the protesters, called for a new day of mobilizations for this July 20. So the congressional hours were adjusted and the legislature was installed in the morning, and not in the afternoon, as usual. There a group of opponents arrived with an upside down Colombian flag, in which red, a symbol of the blood shed during the war of independence, prevailed over the other two colors of the flag. For many sectors, this act of protest symbolizes the blood of the dozens of protesters who died in recent demonstrations at the hands of police officers.

We wear helmets to remind the country of the moment we are living in, a tribute to the dozens of young people who died in the protests of the National Strike and all of those were injured. A symbolic act with a message of dignity and true independence. pic.twitter.com/frY0pVZd3I


The organization Temblores reported to the Inter-American Court of Human Rights (IACHR), during the visit of this entity to the country in the first days of June, that at least 44 people had died due to the actions of the security forces in the framework of the demonstrations. . Other national organizations raised this figure to the IACHR to 84 deceased. The Prosecutor’s Office, for its part, only documents a score of deaths in the 50 days that the protests lasted.

In rejection of the excessive use of police force, impunity and the fact that many of the demands of the social outbreak have not been heard is that hundreds of citizens took to the streets of the country to demonstrate this July 20, a day in Although the protests had wide coverage at the national level, a greater influx was expected.

Duque presents a new tax reform and reforms in the Police

On August 7, 2022, the government of Iván Duque ends. Electoral campaigns have already started in the country and the president’s party, the Democratic Center – led by former senator and former president Álvaro Uribe – is weakened. With one of the lowest approval rates since registration exists, Duque presented a new tax reform to Congress, the so-called Social Investment Law, which is once again rejected in the streets.

The Social Investment law that we will file is the result of consensus. It is the largest human development leap in recent decades, because it lays the foundation for serving the most vulnerable and providing employment and education opportunities for young people. #ColombiaNoSeDetiene


The new Finance Minister, José Manuel Restrepo, appointed amid the heat of the protests after the resignation of his predecessor in May, assures that this reform seeks to raise around 15.2 billion pesos a year (about 3.9 billion dollars) However, for many political sectors the new proposal is just a “cosmetic” reform, as expressed by center-right congresswoman Juanita Goebertus on Twitter.

# 20JulyIs the beginning of the process of the 4th #Tax reform of the Duque Government.

The first 2 were dedicated to eroding spending. The 3rd, a little better, was born dead due to the inability of the government to arrange. The 4th is cosmetic.

Here are some suggestions to improve it👇🏽 pic.twitter.com/VIQqKoPFc0


In the midst of the wide rejection of the actions of the Public Forces in the protests against the Duque Government, the president also presented before Congress the so-called “Comprehensive Transformation Project of the National Police”, with which the Government assures that it seeks greater transparency in the institution and greater respect for Human Rights. From the streets, the protesters are calling for a comprehensive reform of the public entity, as well as the dismantling of ESMAD.

It was also in support of the National Unemployment Committee and especially the ten bills with citizen demands that it presented to Congress on Thursday that many protesters marched on Tuesday. All these requests had already been presented to the dialogue tables with the Government, negotiations that ended more than a month ago without any agreement and with accusations to the Executive by the protesters that they were ignoring the claims of the social outbreak.

The unions hope that Congress will process their proposals, which include a basic income of a minimum monthly wage for one year for 7.5 million households, universal free public higher education, strengthening of the public health network, support for the economic reactivation of small and medium-sized companies, as well as for the agricultural sector, and actions against gender violence, among other proposals.

In the days prior to this mobilization, the authorities detained some leaders of the movement known as ‘First Line’ with extensive devices. These young people, who protect themselves with construction helmets, goggles, gas masks, spell shields and some bobbins, are described as a containment barrier against police brutality. The Police presented as “evidence” to justify the arrests some of these protection elements.

This Tuesday, in the streets of the main cities of the country music was heard again as a manifestation of protest. In Cali, the third largest city in the country and one of the epicenters of the mobilizations since April 28, many gathered in a cultural space renamed the “Loma de la dignidad”. Some reports on networks indicate that the Mobile Anti-Riot Squad (ESMAD) dispersed this concentration with tear gas.