Collapse in Miami: the other two Argentines are identified and the hope of finding survivors falls 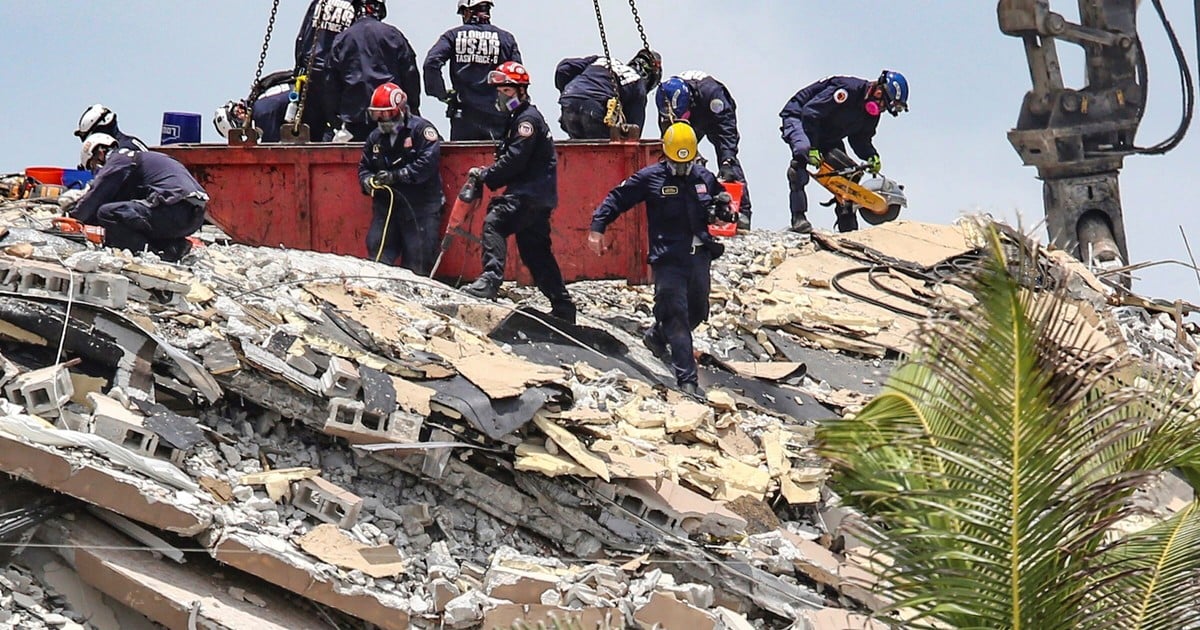 It is a classic hotel on the beach in Miami, which at one time was able to house happy people on vacation, but now it only contains a parade of faces cracked by pain and anguish.

As the hours pass, and the rescue among the ruins of the building collapsed on Thursday morning advances with astonishing slowness, in the Family reunification center which was improvised on the second floor of the Grand Beach Hotel, frustration grows and hopes of finding the missing people who inhabited the Champlain Towers are shattered.

It was reported last night that rescuers had found just another body (totaling five dead) and “Some human remains”. 156 people remain to be found.

From the hotel with palm trees at the entrance, surrounded by patrol cars and journalists, a hurried woman comes out who does not want to say her name to this envoy, but points out with an Argentine accent that she had approached to accompany the relatives of a missing person.

“I came to support the family. This is terrible. We are very distressed for Nicky”He said before leaving.

Clarion confirmed this Saturday that “Nicky” is part of the group of 9 disappeared Argentines who had yet to identify: attorney Nicole “Nicky” Langesfeld, 27 years old.

The identity of the other compatriot who until now had not transcended was also anticipated by this newspaper: it is the physics student Ilan Naibryf, 21, and both are intensely sought after through social media and chats in the Miami Jewish community.

On the night of the tragedy, both were with their loved ones: Nicky, with her new husband, the Venezuelan Luis Sadovnic, on the 8th floor.

Ilan, with his girlfriend Deborah Berezdivin, also in the destroyed part of the Surfside neighborhood complex, which has a strong presence of that community and is home to one of the largest synagogues in the city.

These two young people are the ones who were missing to identify of the 9 disappeared Argentines. They thus join the plastic surgeon Andres Galfrascoli, 44, and his partner, Fabian Nuñez, 55, and Sofia, 5 years.

Also to the family of 48-year-old photographer Graciela Cattarossi, who was with his daughter Estela, 7 years old, his sister Andrea and her parents. At first it had transpired that the five Cattarossi were Argentine, but one is Uruguayan, according to official sources.

Ilan’s sister, Micaela, posted on a social network, with the couple’s photo: “My brother and his girlfriend (Deborah Berezdivin) were in the Surfside building that collapsed in Miami. If you have any information, please send me a message. Please pray ”.

And then he added: “Family and friends we are asking someone with contacts in South Florida hospitals to please know if there is any information on Ilan and Deborah.”

Nicky’s relatives also circulated a photo of her and her Venezuelan husband with whom she had recently married. “We are looking for Nicky Lagensfeld and Luis Sadovnic (8th floor). If anyone has seen them or has any information, please contact this number ”.

An attorney, Nicky studied at the University of Florida and the Miami School of Law. He works for the Reed Smith firm and specializes in commercial litigation.

Her and her husband’s photo can be seen on the makeshift fence as a tribute to the victims, where neighbors come to offer flowers and express their pain.

With every hour that passes there is less hope of finding survivors in the Miami tragedy. (AP)

Nicky’s uncle, Andy, expressed his frustration at the slowness of the rescue: “For three days I have been approaching where they leave me to the mountain of rubble waiting to see hundreds of people lined up passing stones and machinery moving heavy debris, but what I have seen in those three critical days since the early morning of Thursday 24 has left me discouraged and powerless“, He said.

Ilan’s family is also desperately searching for him. He posted his photo on social media and the sister put together a campaign on gofundme.com to raise funds for the missing young man.

There he tells that he is 21 years old and was born in Argentina on September 11. Study physics at the University of Chicago and, according to his sister, “he is ready for life!”

“He is the most loyal and affectionate friend, brother, son, always thinking of others the way to make them feel better. It means a lot to a lot of people ”, they point out.

He went to high school at Hawaii Preparatory Academy, where he learned to surf, play soccer, and enjoy nature with his friends.

He specialized in creating prosthetics at the robotics center. “He always focused on the best things so he could help as many people as possible,” he says.

At the University of Chicago, he began to develop his company, STIX Financials Inc, with which he sought to “help people increase their fortunes and also access liquidity.”

The rescue process is moving slowly and it can be long. At night it was said that they managed to control the explosions and the fire that started in the morning.

When a body or remnant is found, it is checked against the DNA that the relatives of the disappeared have been able to contribute. Ilan’s sister fears the worst: “As a family, we try to prepare for any outcome.”