Collapse in Miami: demolished the part of the building that was still standing 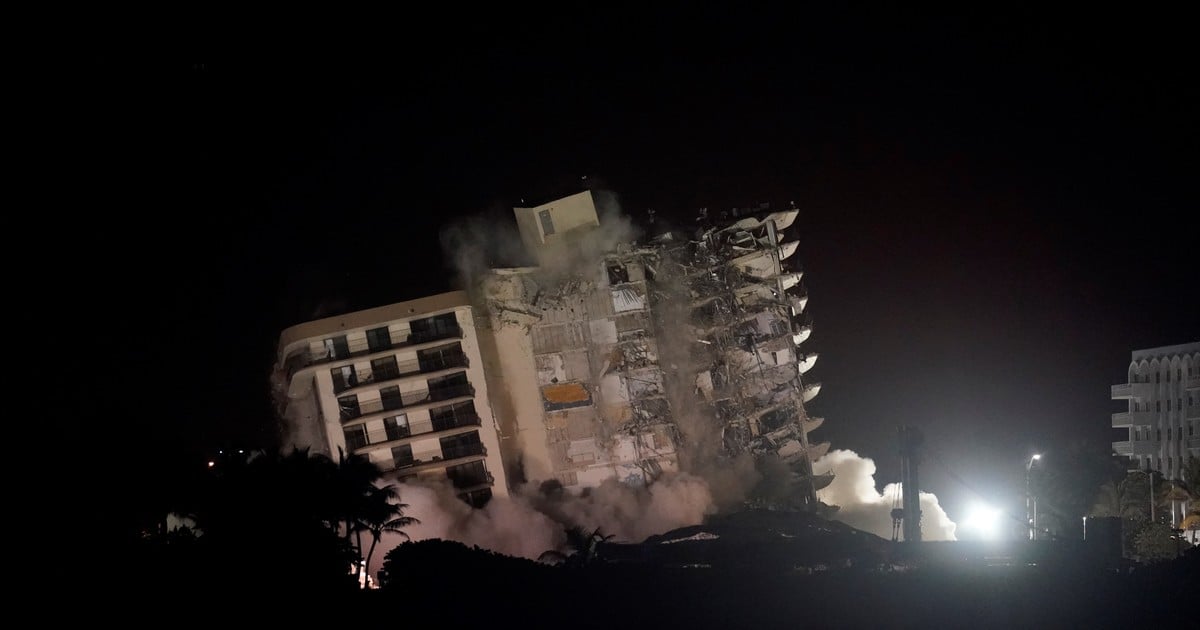 Through a spectacular operation with explosives, the specialists demolished on Sunday night the part of the Champlain Towers South building that had survived the tragic collapse in Miami that at the moment accumulates the sad number of 24 dead and 121 missing, who are still being searched in the rubble.

The operation was carried out by means of a scheduled collapse with sequential detonations using explosive cartridges so that the structure fell on its own axis and did not affect the area in which rescuers work.

Due to the huge cloud of dust derived from the demolition, in the surrounding blocks they requested to keep doors and windows closed, in addition to having the air conditioners turned off, so that it did not infiltrate homes.

As soon as that cloud dissipated and the new debris settled, rescuers are expected to keep working, although without the danger of collapse that had the construction sector that had not fallen.

Not only was there concern about a possible imminent collapse of the building, but the arrival of the tropical storm Elsa to the shores of Florida.

The front has already passed through Cuba and, after its contact with the warm waters of the Straits of Florida, it could add strength and, although it would not have its most powerful center in Miami-Dade, it could even generate storm surge that, given the fragility of the structure, it could have caused another tragedy.

The level of detail of the operation was such that firefighters have even searched for the possible presence of forgotten pets in that part of the building, so as not to drag them to an inevitable death.

To carry out the demolition, the search for victims had to be stopped for 15 hours. Now the remains of the demolished building will be removed immediately in order for rescuers to have access for the first time to the sector of the parking lot, which is one of the centers of the search.

The moment of demolition. Photo by Lynne Sladky / AP

With this, it could be obtained clearer vision of possible gaps in the rubble where there might be survivors.

There have been no rescues of people alive since the first hours after the collapse of the June 24.

In recent days, due to complaints from the owners, two other buildings were evacuated in Miami due to possible risk of collapse. Authorities evaluate structures.

July 4th is the Independence Day from the United States, although this year Miami did not have its traditional celebration with fireworks on the beach.

The Government asked the population that at 9 pm they light candles, the screens of their mobile phones or any type of light to pay tribute to the victims of the collapse, to give a message of hope to the families of the disappeared and in tribute to the rescuers who do not cease in their search.

Again, that vigil that he sent again a message of hopeDespite the days that passed, he had a moving silence between lights that sought to illuminate the rescuers.

An Argentine and her daughter among the victims

Last Saturday the lifeless body of Argentine photographer Graciela Cattarossi was found in the rubble.

Two days before, they had also found the body of her little 7 year old daughter, Stella, in a moving scene, as the girl’s father, a Miami-Dade firefighter, was on the scene.

Graciela and Stella were at the time of the collapse, at 1:23 am, in apartment 501 of the south tower of the Champlain Towers condominium.

There the photographer’s parents were also there (Gino and Graciela) and his sister, Andrea, an architect who lives in Pilar who was visiting Miami, of whom there is no news yet.